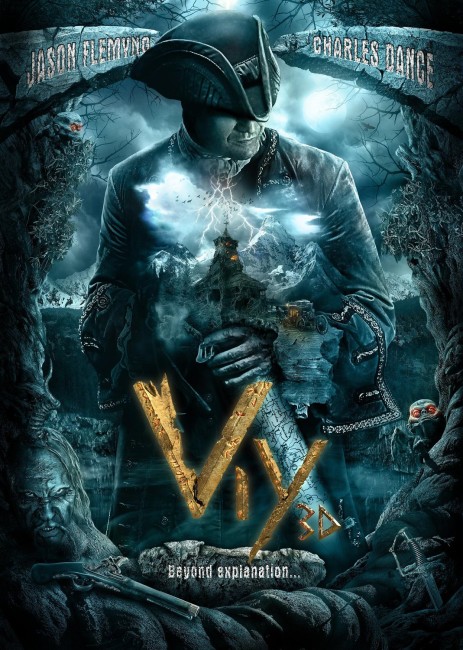 Russia in the 18th Century. The monk Khoma is paid a thousand chevrons by the village head Sotnik to sit in the church overnight by the body of Sotnik’s dead daughter – only for him to see her spirit rise. Khoma and the other monks flee and the area is boarded up to prevent the evil escaping. Sometime later, the British cartographer Jonathan Green, determined to prove himself to his beloved’s disapproving father, is travelling through the region on a mapping expedition. His coach is attacked by phantom wolves and breaks down in the village. As he sets to making repairs, Sotnik offers him money to chart the boarded-off church. Doing so places Jonathan into the midst of the conflicts in the village where the corrupt cleric Paisiy attempts to retrieve the thousand chevrons, while another villager’s murder attempt has the mute innocent Nastusya accused as a witch.

Viy is adapted from The Viy (1835), a short story by the celebrated Russian writer Nikolai Gogol who wrote a number of works of horror and the grotesque during his literary career. The Viy was published in the story collection Mirgorod (1835) in which Gogol wrote several tales based on Russian folklore. On screen, The Viy became the basis of Mario Bava’s classic horror film Black Sunday (1960), albeit very liberally adapted. The classic version of the film is Viy (1967), which was made by the state-backed studio Mosfilm at the height of the Soviet Union. The story was also later adapted as the Yugoslav film A Holy Place (1990).

This version of Viy has been mounted as a prestige production, as evidenced by the import of names with international marquee appeal like Jason Flemyng and Charles Dance. A huge amount of budget has been placed into the sets and dressings and the visual effects. The film looks a beautifully set up work of Gothic fantasy – the landscape broods with flocks of crows, witches on broomsticks, tree monsters and pursuit by packs of phantom wolves. Jason Flemyng is written as an eccentric cartographer inventor with a horse carriage of quasi-Steampunk pop-out inventions. The nearest equivalent might be something like Tim Burton’s Sleepy Hollow (1999) or perhaps Tsui Hark’s Detective Dee and the Mystery of the Phantom Flame (2010).

At the same time, the film is a mishmash of script elements that are all over the place. In the 1967 film and the short story, the night in the crypt was the climactic scene; here it (sort of) takes place during the opening scene and the rest of the film is an elaborate piece of plotting that reveals that that wasn’t what happened at all. At least, that’s what I think it is about. The rest of the plot essentially reduces the Gogol story to the denouement of an episode of Scooby Doo, Where Are You? (1969-72) where spooky elements are revealed to be no more than a villain in a costume and explaining the resurrection away as not having happened.

The bulk of the film becomes taken up by a lot of running around the village with Jason Flemyng and the happenings between various others including a corrupt cleric and a mute girl innocently accused of being a witch. It is like the Gogol story has been stripped of all the supernatural aspects by someone who is determined to turn it into something where they can’t decide if it is a Gothic fantasy or a comedy, ending up achieving only narrative incoherence.

Director Oleg Stepchenko, along with Jason Flemyng, Anna Churina and Charles Dance, returned with a sequel Iron Mask/Viy 2: Journey to China (2019), which was made with a much bigger budget and more imported name stars.