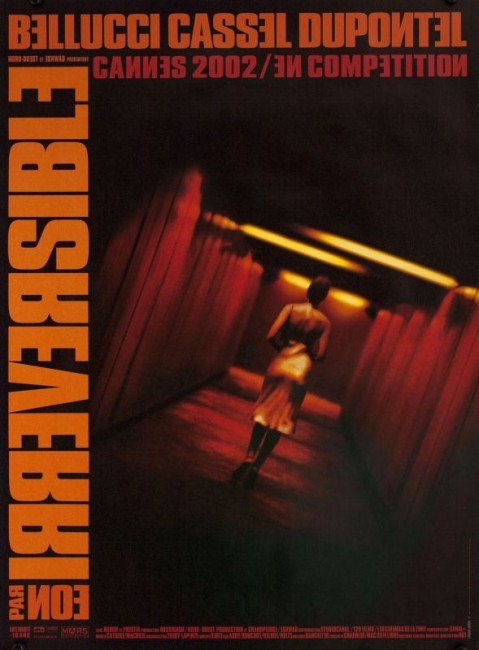 Police arrest a man at a hardcore gay nightclub The Rectum. Marcus burst into the club in search of one of the patrons The Tenia and brutally beats a man’s face to a bloody pulp with a fire extinguisher. Marcus and his friend Pierre were leaving a party only to see Marcus’s girlfriend Alex being taken away in an ambulance, having been badly beaten. Alex had left the party and walked through an underpass where The Tenia attacked and anally raped her. Alex decided to leave the party after Marcus became wired on coke. Earlier, she had found that she was pregnant with Marcus’s child.

Irreversible is one of those rare films that cause major censorship ripples and can join the company of films as notorious as The Last House on the Left (1972), The Texas Chain Saw Massacre (1974), Salo or 120 Days of Sodom (1975) and the film it often closely resembles, Day of the Woman/I Spit on Your Grave (1978). The screening I attended at Beck’s Incredible Film Festival in Wellington, New Zealand, had had two court injunctions brought against it by the conservative Christian-funded Society for the Protection of Community Standards who were trying to ban it on the grounds of it being injurious to public morality.

Furthermore, before the single screening, theatre management stood up to caution the sell-out audience and offered to refund the money of anybody who chose to walk out or had strayed in under the mistaken impression about what they were seeing. Incredulously, the audience was given further warning that the sirens and strobe effects could potentially be the cause of epileptic seizures (as had been reported overseas). Management later confirmed to me that of an audience of 500, there had been fifteen refunds and one vomiting.

That is a heck of a stern warning label for a film to live up to. All of this prepares one for Irreversible being a hardier viewing experience than it is in actuality. It is certainly harrowing, no denying. There is an unflinchingly nasty scene several minutes into the film where a man’s head is bashed to a broken and bloody pulp by a fire extinguisher. There is also the fourteen-minute long scene where Monica Bellucci is anally raped in a tunnel. Not wishing to decry the stark impact of both scenes – which is considerable – but they do also feel tame in comparison to other cinematic counterparts and in terms of build-up and expectation.

The sheer savagery of the climax of Salo or the sadism against animals in Italian cannibal films such as Cannibal Holocaust (1979) and Cannibal Ferox/Make Them Die Slowly (1981) far outstrips the single scene of violence here in terms of unflinching nastiness. The prolonged multiple rapes of Camille Keaton in I Spit on Your Grave seemed far more brutal and humiliating than the one here. While there is a modest amount of both male and female full frontal nudity seen throughout – a transvestite prostitute waggling her dick and almost-glimpses of a man jerking off during the Rectum sequence – films in recent years such as Romance (1999), Baise-Moi (2000), Intimacy (2000) and Anatomy of Hell (2004) all showed sexual acts much more explicitly and in actual, rather than simulated, detail.

Director Gaspar Noe certainly likes to make films that are full on – he previously outraged festival audiences with I Stand Alone (1998) about a butcher engaged in revenge and incest. Irreversible has as many defenders as it does detractors. While its detractors point to the controversy, its defenders point to its artistic pretensions, which are considerable. Noe has borrowed the narrative device from Memento (2000) of telling the film backwards. There is a certain cleverness to this – the entire film is a journey backwards from incoherent rage to an almost idyllically pastoral celebration of love and impending motherhood.

Noe litters the film with clues and almost precognitions – dreams, images, offhand comments – that seem to have been borrowed from Nicolas Roeg’s Don’t Look Now (1973) in their presaging of a violent event to happen – the film is filled with recurrent tunnel imagery, for instance. The camerawork and look of the film changes as we go further back – from the derangedly frenetic handheld camera of The Rectum sequences, all shot in a hellish red light, to the clear, classically framed, nostalgically golden hues that surround Monica Bellucci and Vincent Cassel in their apartment. Even the title is an ironic one – for while the title is ‘Irreversible’, the film itself comes almost entirely reversed (even down to the end credits being played at the start).

For all Irreversible‘s brutal and shocking portrait of a rape and the puncturing of a dream life, it is never entirely clear what Gaspar Noe has to say. Irreversible is as pretentious as anything. Gaspar Noe, for instance, gives us a baffling ending, which goes from Monica Bellucci finding out that she is pregnant to the camera closing in on a poster for 2001: A Space Odyssey (1968) to Bellucci on a grassy knoll in a summer dress surrounded by playing children, reading her book about time as the camera circles around her, before the film vanishes off into a frenetically strobing blank white screen in the midst of which appears to almost be a 2001-like embryonic nebula shape and the final legend “Time Destroys All Things.” Quite what this phrase means is anybody’s guess – are we to take this in the sense of not knowing what unexpected events lie ahead of us in seeing how these will destroy Monica Bellucci’s idyll? Or are we to regard the 2001 allusions as a Stephen Hawking-esque literal reversal of time where we see that time is hurtling in reverse to be swallowed up in a big bang of white noise and star clusters? Meaning eludes one.

For all the controversy, Irreversible is an oddly conservative film. Gaspar Noe draws upon sentimental images – of the naturalness of Monica Bellucci and Vincent Cassel’s love, of her becoming pregnant, their home life shot in golden hues. By contrast, the nightmare opposite of this is seen as a hardcore gay nightclub, which comes shot in lurid red hues where men figuratively seem to leap out at every opportunity begging the heterosexual Vincent Cassel to fuck or fist them. It is the caricaturing of the gay sex club underworld as not merely sordid but also hellish and depraved that had gay groups protesting against the often similar Cruising (1980) – in fact, the caricaturing here is an even more extreme one.

The irony of the censorship kafuffle is that both sides of the coin – filmmaker Gaspar Noe and conservative Christian groups like the Society for the Protection of Community Standards – entirely agree on the images that the film holds up – that monogamous heterosexual love, family and child-rearing are good things, while gay clubs with rampant sexuality are disgusting, filled with criminals and perverts and should be literally equated with Hell.

Gaspar Noe subsequently went onto make Enter the Void (2009), a first-person shot film that follows a soul as it departs from its body and travels back through its memories and into the afterlife, followed by the non-genre Love (2015) and the drug trip film Climax (2018).