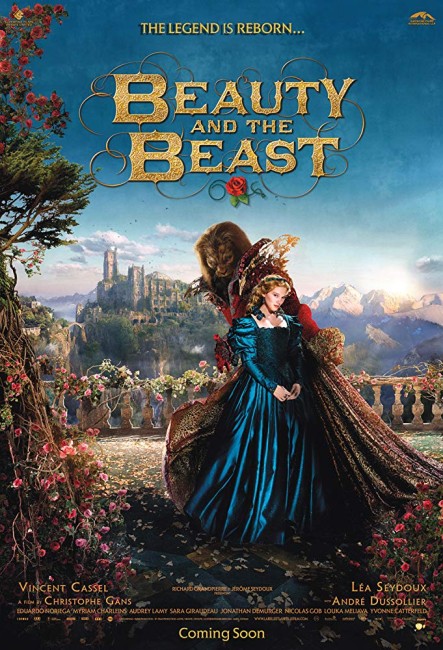 The merchant de Bofremon is ruined after three of his ships are sunken at sea. He and his three sons and three daughters are forced to abandon their villa and move to a cottage in the countryside. Only the youngest daughter Belle enjoys life there where she has the freedom to cultivate a garden. When news comes of the recovery of one of the ships, the merchant rides to investigate. The other daughters ask for lavish gifts but Belle only asks for a single rose for her garden. Arriving at the port, the merchant is forced to flee town pursued by his son Maxim’s debtors. With his horse wounded, he enters into a magical woods. He comes upon an abandoned castle where he finds food laid out for him and his horse healed. However, when he goes to take a rose for Belle the next morning, he is attacked by a savage beast. The beast demands the merchant stay in return for stealing one of his beloved roses, although relents to grant him one day to go and say goodbye to his family. Upon hearing what happened, Belle returns to the beast in her father’s place. There she forms a friendship with the fearsome but tender beast, learning the secret of how he was a man who was cursed with animal form for killing the fawn that was his beloved, a woodland nymph who changed between animal and human form. Her presence serves to open the beast’s heart to her.

French director Christophe Gans is a genre contributor of some interest. After working as a film critic, Gans made his directorial debut with the The Hotel of the Drowned segment of the H.P. Lovecraft anthology Necronomicon (1993). He made his full-length debut with the underrated adaptation of the manga Crying Freeman (1995). Other works followed with the historical monster movie Brotherhood of the Wolf (2001) and the reasonable hit of the videogame adaptation Silent Hill (2006), while he also produced Saint Ange (2004) for the then unknown Pascal Laugier.

Beauty and the Beast emerges after an eight year period of silence where Gans moved through a number of productions that failed to come off, including the sequel to Silent Hill, an adaptation of the ninjas vs supernatural videogame Onimusha and Fantomas, a remake of the classic silent serial about a super-thief.

Jeanne-Marie Leprince de Beaumont’s Beauty and the Beast (1756) is considered one the classic fairytales. It has been adapted to the screen numerous times (see below). Christophe Gans keeps largely to the classic telling of the tale, except for one or two minor details elaborating out the problems resulting from one of the brothers’ gambling debts. The major change is in the invention of the Beast’s backstory – how he was a prince of the lands, met and married a beautiful women who asked only that he do not kill the golden fawn, which he ignored only to find out that he had instead killed her – a woodland nymph who was a shapechanger – whereupon he was cursed with beast-like form by her father, the god of the forest.

Gans and his team of CGI artists and costumiers go to town and create an exquisitely dreamy fairytale world. The magical land reminds a good deal of the artistic and scenographic excess that Ridley Scott lavished on the amazing and underrated Legend (1985), which was one of the first dark, adult fairytales.

The fields and wild woods of the Beast’s magical kingdom glow with hyper-real beauty. The grounds are filled with the stunning architecture of fallen and overgrown buildings, statues of giants that lie half-buried in pools. Even the hallways of the castle and Beauty’s bedroom come overgrown with artfully decorous creepers. There are banquet tables over-spilling with food as though out of a classic painting, while Gans has borrowed a touch from Jean Cocteau and has the dining hall filled with magically self-lighting candles.

There are shots that make you cry out in amazement like the image of Lea Seydoux pursuing a deer through a forest carpeted with red roses. Or where the Beast pursues Lea Seydoux out onto the iced over lake and pounces on top of her, only for her to fall through the ice, followed by the breathtaking wide angle shot from under the ice as we see her sinking in a tiny nimbus of light before being snatched back up by the Beast.

The main problem with Beauty and the Beast is the CGI effects. There is nothing wrong with them per se and many of the shots creating the magical kingdom are stunning. It is just that the creature effects fail to convince. Perhaps this is a little in the way of Uncanny Valley but the scenes where we have a CGI-generated Beast only seem like you are looking at a CGI-generated creature as opposed to a character – not the sort of effect you get looking at say Weta’s Gollum in The Lord of the Rings films, their King Kong (2005) or the ape characters in the Planet of the Apes reboot series. There is the same effect when it comes to other supporting non-human creatures throughout such as Tadomi creatures or the giants that rise at the climax. Similarly, the pursuit of the golden fawn through the woods and perfectly laid out gardens is another of the film’s dreamily beautiful images, spoilt only by an obvious CGI animal.

Vincent Cassel is top-billed but his appearances as himself are largely kept to a handful of flashbacks and he disappears altogether when the motion-capture artists take over to create the digital Beast. Lea Seydoux, who one kept being reminded of with blue hair and seeing more intimate detail of her that one probably needed in the lesbian epic Blue is the Warmest Colour (2013), has a beatific loveliness as Beauty.