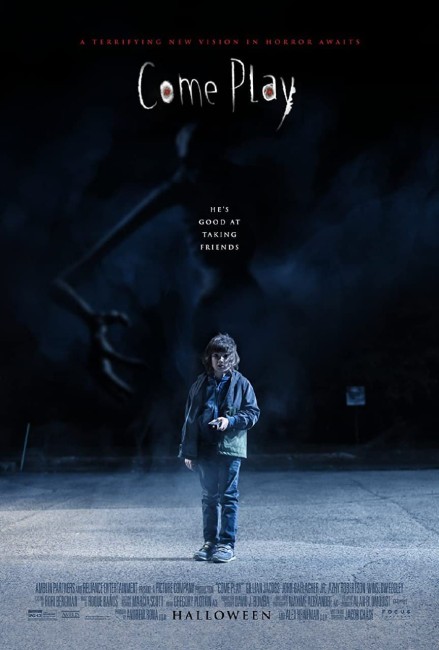 Oliver is a child on the autism spectrum and does not verbally speak, only communicates via a text-to-speech app on his phone. One day, he finds the e-book Misunderstood Monsters on his phone, which tells the story of the monster Larry who wants to become his friend. However, as he reads, the lights start to flicker and Oliver becomes scared. He thinks he sees figures creeping around the house and the e-book then starts talking to him. When three boys from school come on a sleepover, they find a copy of the book and read it only to be terrified when all the lights in the house blow out. Gradually, Oliver’s mother Sarah comes to believe that Larry is in the process of manifesting from the book and wants to claim Oliver as his friend.

Come Play is from director/writer Jacob Chase. Chase has made quite a number of short films since the 2000s and one feature-length film with the relationship comedy The Four-Faced Liar (2010). Come Play is a feature-length expansion of his previous five minute short film Larry (2017), although the short only consists of the man in the booth activating the tablet and the character of Oliver has been create for the film. For a relatively unknown director, Come Play received surprisingly high-profile backing – from no less than Steven Spielberg’s production company Amblin Partners. The film did make some theatrical play during the 2020 Covid pandemic.

Jacob Chase creates a smart and admirably simple premise – Azhy Robertson is a child on the autism spectrum struggling to communicate; Azhy most wants a friend; the friend happens to be a malevolent entity that lives inside an e-book and is trying to manifest into the real world. In some ways you can almost read Come Play as the nightmare equivalent of Spielberg’s E.T. – The Extra-Terrestrial (1982) and its plot of the lonely child who finds an otherworldly friend. Although the more obvious comparisons make this an e-book equivalent of The Babadook (2014).

Come Play is really a film about childhood nightmares. These are uncommonly well depicted. Jacob Chase creates a series of eerie jumps – of faces seen in the darkness; almost-human shapes appearing in paper blown in the wind outside father John Gallagher Jr.’s work booth; the tablet suddenly speaking back to Azhy Robertson, the momentary appearances of the skeletal creature; Larry pushing the Spongebob figure onto the bed. There is a terrifying scene where the Larry entity is invoked by the kids fooling around at the sleepover where it proceeds to terrorise them by blowing out all the lights in the house.

Jacob Chase conducts a depiction of a child on the autism spectrum and the problems they face with a great deal of conviction. The film more than effectively brings home the emotional issues that such a child faces – his inability to verbalise, the helplessness after the other kids throw Azhy’s phone away in the field, the desire for a friend, the feeling of betrayal left by an overwhelmed parent lying about things.