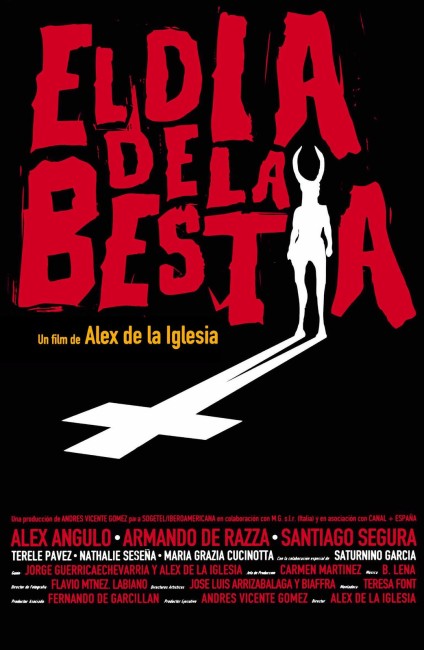 Angel Berriartua, a Catholic priest and professor of theology, has cracked the secret code of the Apocalypse prophecies – a numeric cipher that gives the date of the return of The Devil as Madrid on December 25th, 1995. He still needs to find exactly where. He sets out into the streets, conducting acts of evil, reasoning that this is the best way to find The Devil. Gathering an ex-seminarian turned heavy metalhead and a tv psychic to his cause, he decides it is necessary to conduct a Satanic ceremony to summon the Devil.

This was the second film from Alex de la Iglesia who has since gone on to become a major name in Spanish cinema. (See below for Alex de la Iglesia’s other genre films). The film received quite reasonable response and toured a number of international film festivals before being given an arthouse release.

There is a great idea behind The Day of the Beast. It sets out to be a much-needed black comedy sending up Biblical End Times Prophecies madness – the genre of Biblical prophecies concerning themselves with The Book of Revelations, the Anti-Christ, The Rapture and the Number of the Beast, 666 et al. End Times Prophecies – both the real prophecies and their cinematic exploitations, which began on film with The Omen (1976) – do need sending-up and there is a rich mine of material that the film sits on.

For a time, The Day of the Beast starts to tap into this with a promising parody of all the prophecies, Bible numerics, signs and interpretations and so on. However, the film fails to deliver on such a promising idea. Instead of tapping the satiric potential of the idea, it dissolves into a chase caper along the lines of one of the giddy melodramas that director Alex de la Iglesia’s mentor Pedro Almodovar specialises in. Unfortunately, Alex de la Iglesia frequently overplays his hand many of the sequences go on well beyond the point they needed to be funny.

The film has occasional moments – one of its pluses is a funny performance of potty comic determination from Alex Angulo. The scenes of him wandering Madrid trying to be evil or attempting to obtain Nathalie Sesena’s blood for the ceremony are rather amusing. There is good support from Santiago Segura as the slobbish, dim-witted metalhead.

Unfortunately, Alex de la Iglesia does seem unsure of himself at times, particularly when it comes to dealing with the fantastic elements. There is the appearance of the goat at the seance and the Devil at the climax but one is not sure what purpose they are meant to serve. They serve more to puzzle than enlighten – the film seems to suggest that what is seen could well be in the minds of the people experiencing them, but such ideas are never driven home by the rest of the film. What The Day of the Beast needed is someone like a Terry Gilliam at the helm who would have made full usage of the richness of the material at hand.

Spanish director Alex de la Iglesia had previously made with the amusing future terrorist comedy Accion Mutante (1993) and went onto make the amazing Perdita Durango/Dance with the Devil (1997), the genre black comedies Common Wealth (2000) and Ferpect Crime (2004), the mathematical murder mystery The Oxford Murders (2008), the sf tv series Pluton B.R.B. Nero (2008-9), the circus psycho-thriller A Sad Trumpet Ballad (2010), As Luck Would Have It (2011), a satire on the modern media, the comedy Witching and Bitching (2013), and The Bar (2017) with a group of strangers trapped inside a bar during the outbreak of a deadly infection.