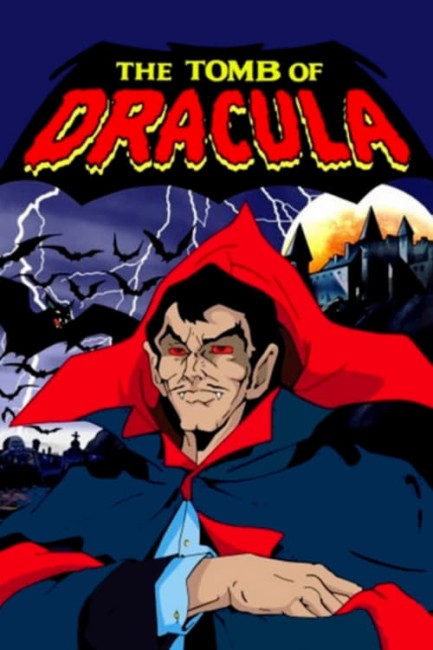 aka Dracula: Sovereign of the Damned; The Tomb of Dracula
(Yami no Teio Kyuketsuki Dracula)

In present-day Boston, Dracula bursts into a Satanic ceremony – where he is taken for a manifestation of Satan – and abducts Delores, a woman who is about to be sacrificed. However, he is overcome with love for her and is unable to drink her blood. The two settle down and have a child, Janus. Meanwhile, Frank Drake, the cocky present-day descendant of Dracula, is recruited by a wheelchair-ridden Hans Harker and crossbow-wielding Rachel Van Helsing to form a vampire-hunting team. Janus is then killed by the revenge-seeking Satanists (although is later divinely resurrected as an avatar of good). Meanwhile, Satan, who made Dracula a vampire, strips Dracula of his vampirism for abusing his power, forcing Dracula go on a quest to find another vampire who will restore his powers.

This obscure Japanese film is not an adaption of Bram Stoker’s Dracula (1897), as the title mistakenly leads some people to think, but rather an adaptation of a Marvel comic-book The Tomb of Dracula (1972-80). This was the same comic-book that gave birth to the character of Blade, who was later incarnated in his own comic-book and as a popular series of films beginning with Blade (1998). Several of the Marvel writers are involved in the film – Marv Wolfman (whose name is amusingly misspelt as Mary Wolfman) and Gene Colan (whose name is similarly feminised as Jean Colan).

Part of the problem with the film is that the screenwriters have attempted to compact the entire dramatics of the comic’s first two year run into a single plot. What ends up on screen is probably one of the most unusual Dracula films ever conceived. The bizarrely contrived plot includes not only Dracula, but vampire hunters, Satanists, appearances from Satan himself, rival vampires, zombies and Dracula’s son who is divinely raised from the dead and turned into some sort of superhero-come-avatar-of-good. In this wild jangle, sides cannot help but get confused – even Satan is reduced to little more than just another super-villain.

In one of its better parts, the film constructs an origin story for Dracula, identifying him in all but name with Vlad the Impaler, and making him a good person who was corrupted in the name of defending his homeland to be resurrected by Satan. However, creating sympathy for Dracula confuses the issue – it makes the vampire hunters seem obsessive; even the Almighty, in creating someone to destroy Dracula, cannot help but seem unforgiving.

For all the torrid dramatics that the plot contorts, surprisingly little of it ever translates into visual excitement. The animation is very limited – the film does appropriate the robust dramatic style of the Marvel Comics artists of the 1970s but the fact that only the most limited part of the drawn action moves at one time virtually kills excitement off. What there is is melodramatic and flat. The characters are insipid and of little depth.