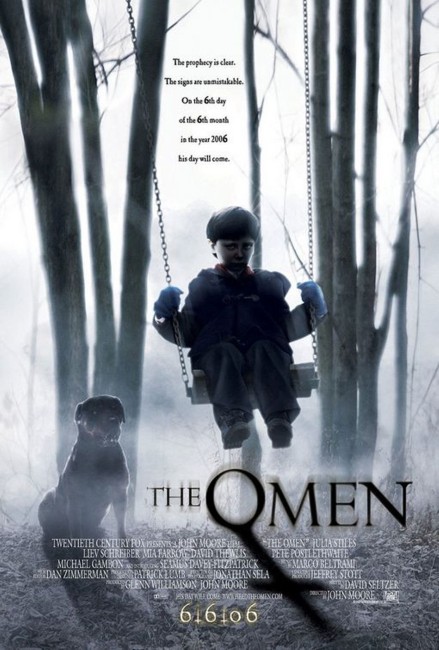 Deputy US ambassador Robert Thorn’s wife Katharine gives birth to a son in Rome. The monks at the hospital inform Thorn that the child has died. They offer him as substitute another child whose mother has died. Thorn accepts and he and Katharine name the child Damien. Soon after, Thorn’s superior dies in a freak accident and Thorn is appointed US ambassador to Great Britain. As Damien grows up, the people around him die bizarre deaths. A priest comes to Thorn, telling him that Damien is the Anti-Christ and must be killed. Thorn dismisses the priest, however as the bizarre deaths of people around him increase, he becomes convinced that the prophecies in The Bible about the Anti-Christ are coming true.

The Omen (1976) was one of the classic horror films of the 1970s. It was one of the big three, along with Rosemary’s Baby (1968) and The Exorcist (1973), that formed the 1970s occult cycle. These three films centred around evil Satanically influenced or birthed children. The Omen‘s novelty was in taking the various End Times prophecies of people like Hal Lindsay and The Book of Revelations and winding them into an entertaining package arrayed around a series of novelty deaths. The Omen was a big success and produced a host of sequels, Damien: Omen II (1978), The Final Conflict (1981) and the tv movie Omen IV: The Awakening (1991), along with a great many imitators.

The cleverness of this new version of The Omen is that it managed to take perfect opportunity of the coincidence between the horror remakes fad and timing to come out on June 6th, 2006 ie. 06/06/06. The remake has also brought back David Seltzer, the screenwriter of the original, to fine-tune his script. The new director John Moore is an Irish-born commercials director who had previously made films like Behind Enemy Lines (2001), Flight of the Phoenix (2004) and the subsequent videogame adaptation Max Payne (2008), A Good Day to Die Hard (2013) and the techno-thriller I.T. (2016).

David Selzter’s script keeps very closely to the original The Omen. There are a few minor changes – like the introduction of the additional death of Robert Thorn’s ambassadorial predecessor and the slight strengthening of the role of Katharine and her dislike of Damien. For the most part though, David Seltzer repeats his original script, sometimes even word for word. Seltzer does not even seem that interested in updating the political context of The Omen – there are some excerpts of news footage of the Twin Towers going down, the Asian Tsunami and the Iraq War in the priest’s montage at the start and David Thewlis makes reference to the European Union as the meaning of new Roman Empire but Seltzer does nothing else to update the story’s context (and his interpretation of the Biblical prophecies) in any way.

Dramatically, The Omen 2006 is a much cleaner and smoother film than the original was. It probably has a much bigger budget comparatively speaking than the first film did. Director John Moore gives all the familiar killing set-pieces – the hanging of the nanny, the priest being pierced by a spike from a church, the photographer’s beheading – a big dramatic punch. You know they are coming if you have seen the original but Moore builds to them well and the punchline of each holds an effective shock. Moore also throws in a handful of dream sequences, although these are pointless additions that add nothing to the film.

From time to time, John Moore quotes from other classic horror films of the era – just before Pete Postlethwaite’s priest is impaled, a red hooded figure runs through the background just like the dwarf killer from Don’t Look Now (1973); as Damien rides his scooter along to knock Julia Stiles over the banister, the floor-level Steadicam tracking shots mirror Danny Lloyd riding his tricycle in Stanley Kubrick’s The Shining (1980). Moore also adds a series of nicely stylised sets – Julia Stiles in a red gown in a pure white-on-white bathroom; the psychiatrist’s office with light shining in from narrow slit windows; David Thewlis’s darkroom surrounded in red fluorescent lights; Damien’s bedroom lit by candles behind ornate glass windows; an Italian piazza encircled by mauve flags.

One is not sure if these film quotes and sets add anything over what The Omen 1976 had but John Moore gives the remake a nicely stylish look. Maybe though that is The Omen 2006‘s problem – like Gus Van Sant’s exacting remake of Psycho (1998), all that one admires is its retouching of the familiar places of the original, but in treading such a familiar path, the film seems to have little to say for itself as an original entity.

The casting is variable. Liev Schreiber is a better actor than Gregory Peck ever was. The one thing Schreiber lacks however is the stature and presence that Peck brought to the role. When he played the part of Thorn, Gregory Peck brought with him the legacy of the classic heroic roles he had founded his career on. Liev Schreiber, a fine method actor, lacks such a cinematic shadow behind his shoulder and is merely an actor in a generic part. Julia Stiles is not too bad as Katharine, while David Thewlis fits perfectly into the David Warner role from the original. The best performance in the remake comes from the elfin-faced Mia Farrow who makes for a wonderfully sinister Mrs Baylock.

The one thing the remake noticeably lacks is Jerry Goldsmith’s magnificent sinister score from the original – Marco Beltrami’s score in anonymous and, even if Beltrami quotes Goldsmith’s score over the end credits, is still a much lesser piece.

Subsequent to this there was the short-lived tv series Damien (2016), a further sequel to the original following Damien through his teenage years