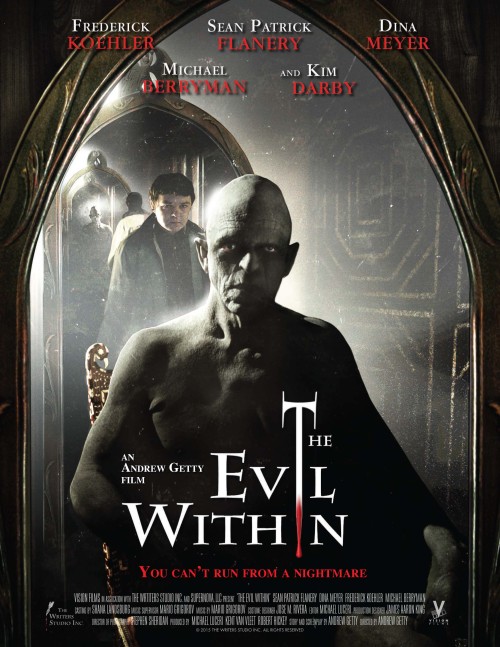 The intellectually handicapped Dennis Peterson lives with and is tended by his brother John. John digs a large old mirror out of the basement and insists on putting it in Dennis’s room even though Dennis is fearful of it. Dennis’s reflection in the mirror pushes him to start killing small animals and to then progress on to children. Dennis soon finds that he enjoys killing. John becomes concerned when he discovers that Dennis has books on taxidermy and is engaged on a secret project in the basement. At the same time, John is wanting to marry his girlfriend Lydia and she has been urging him to sell the house, place Dennis in an institution and move in with her. However, the mirror Dennis starts pushing Dennis to start killing adults, suggesting that he should target people he knows.

The Evil Within is one of those films where you suspect the story behind its making might have made for just as interesting a film as the one you are watching up on the screen. Andrew Getty was a grandson to J. Paul Getty, the founder of the Getty Oil Company – (the same J. Paul Getty who is portrayed in Ridley Scott’s All the Money in the World (2017), which came out later the same year as this), and was an heir to the Getty fortune. (Andrew is also uncle to actor Balthazar Getty).

Andrew Getty was obsessed with becoming a filmmaker and in 2002 began filming The Evil Within, which was then called The Storyteller. Financing the entire production himself, he built sets and shot the film in his own Hollywood mansion, even employing several moderately well known Hollywood actors. After Getty’s money ran out, he sporadically attempted to finish the film but the editing process dragged out for over a decade, Getty led a troubled lifestyle, including having a meth habit. He abruptly died of an intestinal rupture in 2015 at the age of 47. The Evil Within was subsequently completed by Getty’s editor Michael Luceri and released in 2017.

I went into The Evil Within without much expectation and came out firmly convinced that Andrew Getty had the makings of a major genre director had he lived. As it is, The Evil Within has instant cult hit written all over it. The opening is a blur of scenes – burning rooms morphing into garage facades, flickering face shapes appearing out of walls, a creepy carnival in the middle of nowhere and assorted juxtapositions of imagery – the likes of which one has not seen outside of a student surrealist short. The wildness of some of the imagery that Getty throws at us – the mother figure who has a mouthful of teeth for eyes; Michael Berryman’s corpse figure unzipping Frederick Koehler’s body and slipping inside it – leaves you absolutely slack-jawed.

A look through Frederick Koehler’s credits shows he has remained steadily employed ever since he was a child actor back in the 1980s. He has appeared in a large number of tv shows and occasional film appearances, many of which I have seen, although I have no distinct memory of his face. In The Evil Within, he announces himself as an astonishing presence. He affects the mannerisms of a handicapped person, delivering a performance that is highly sympathetic to us. At the same time, he also appears as his own evil mirror doppelganger.

Getty delivers some sensational scenes between the two – like when we first see the doppelganger cruelly trying to tell a joke in Koehler’s awkward handicapped mannerisms, or the scene where Koehler and the doppelganger sit both drawing a picture but the doppelganger keeps turning everything he does into something malicious. There is a positively diabolical scene where the doppelganger leads Koehler via a trail of devastatingly malevolent logic to start killing a cat.

The lines of dialogue have a devastating blackness: “Grab a doggie from the cooler … You’re holding a new paintbrush, Dennis,” or where the doppelganger chillingly convinces him to kill the girl at the ice cream store “If you killed her, she’d die screaming, she’d die in agony but she’d die wet between the legs.”