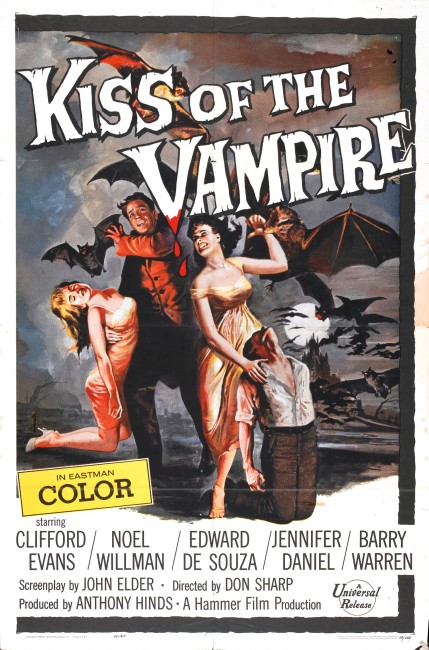 aka Kiss of Evil

The early part of the century. Gerald Harcourt and his newlywed wife Marianne are passing through Bavaria on their honeymoon when their car breaks down. They seek refuge in the local village where the locals seem very superstitious and fearful. They are befriended by the wealthy and charming Dr Ravna who invites them to a masque at the Chateau Ravna. Gerald passes out drunk and when he wakes in the morning he finds that Marianne is missing. Both Ravna and the entire village deny any trace of her existence. The only person who will help him is the embittered Professor Zimmer and so Gerald bands together with him to rescue Marianne from being claimed by Ravna’s vampire coven.

Kiss of the Vampire is one of the more interesting vampire films to come out of Hammer Films during the 1960s. It was made in the period after Hammer had had their huge initial international success with Dracula/The Horror of Dracula (1958). For several years after that, Christopher Lee refused to return to the part of Dracula, determining to establish himself as a serious actor first. The period saw The Brides of Dracula (1960), which tried to be a Dracula film without having Christopher Lee or any Dracula present. Kiss of the Vampire interestingly enough had begun life as another tentative Christopher Lee-less Dracula film. Hammer then decided to make it an original film that would not be dependent on such a notable absence at its center and such connections were written out.

Kiss of the Vampire is an interesting effort. It has been aptly called a vampire version of Alfred Hitchcock’s The Lady Vanishes (1938) – a film that Hammer later directly remade in 1979. Producer Anthony Hinds sets up a fair and reasonable script, better than most of the later Dracula sequels. The focus is not so much the hardly interesting married couple but the two opposing figures of good and evil fighting on either side of the film – Noel Willman who plays the vampire with glacial stolidity but alas lacks any real charismatic presence, and Clifford Evans who plays the vampire hunter with a brooding harshness.

Kiss of the Vampire also comes filled with several other intriguing performances packed around the sides, most notably from Barry Warren as Ravna’s very weird son and Barbara Steele-lookalike Isobel Black as the innkeeper’s vampirised daughter who one wishes had been given more screen time.

Don Sharp’s handling sometimes falters but he is aided considerably by the sumptuous production values of all early Hammer films, which buoy the film up, most notably during the beautifully staged masque sequence. [The masque scenes were later wittily parodied in Roman Polanski’s The Fearless Vampire Killers/Dance of the Vampires (1967)]. There is an unusual climax featuring hordes of attacking vampire bats (a sequence that had originally been intended as the climax of The Brides of Dracula), which falters slightly through merely adequate effects.

Kiss of the Vampire was the genre debut of Australian-born Don Sharp who later became a regular director within the British horror industry making the likes of Witchcraft (1964), Curse of the Fly (1965), the first two of the Christopher Lee Fu Manchu series The Face of Fu Manchu (1965) and The Brides of Fu Manchu (1966), Hammer’s Rasputin The Mad Monk (1966), the period sf comedy Jules Verne’s Rocket to the Moon/Those Fantastic Flying Fools/Blast Off (1967), the psycho-thriller Dark Places (1973), the undead biker film Psychomania (1973) and the lost world film Secrets of the Phantom Caverns/What Waits Below (1984).

Kiss of the Vampire exists in two different versions, the original cinematic and video release. Kiss of Evil is a cut version for tv, which adds additional scenes taken from Hammer’s The Evil of Frankenstein (1964).