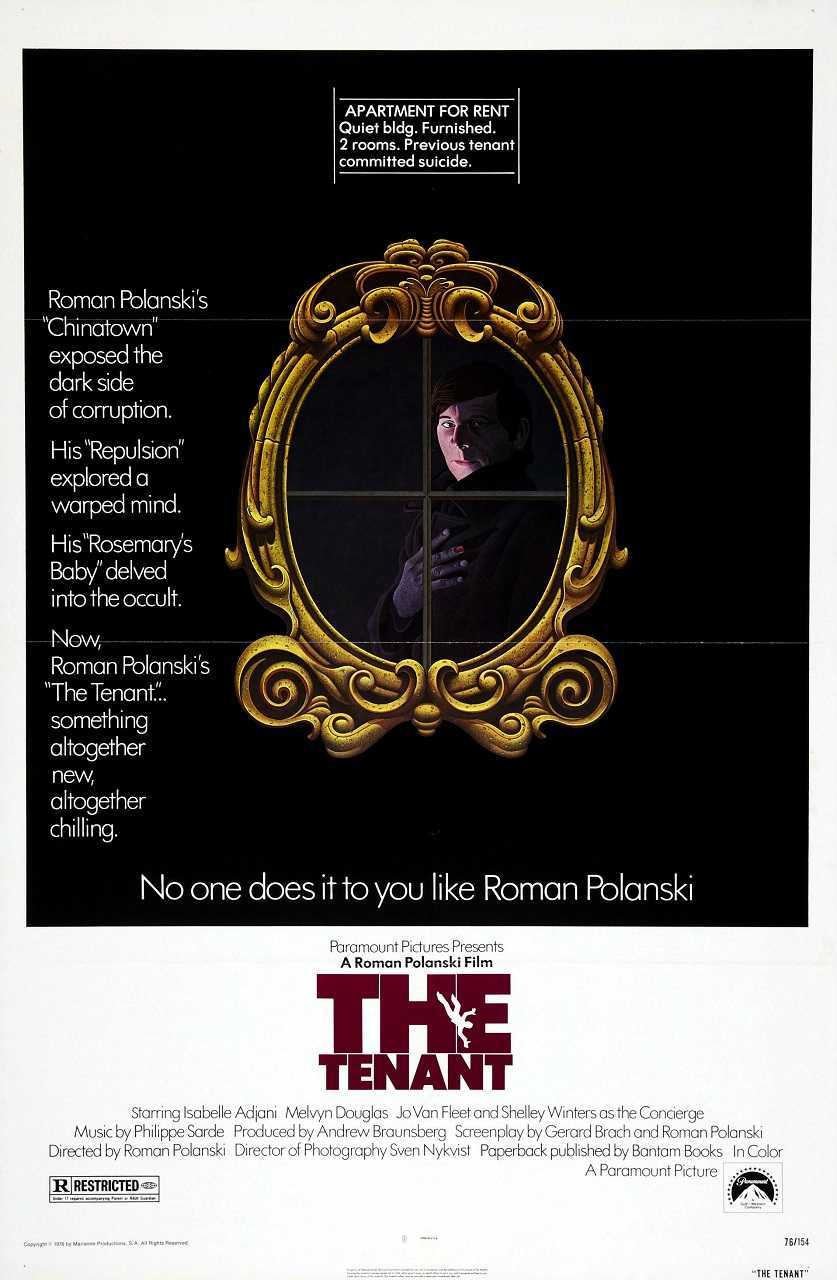 Trelkovsky, a mousy Polish émigré working as a clerk in Paris, moves into a new apartment building. He learns how the previous tenant Simone Schule threw herself out the window. After moving in, Trelkovsky becomes caught up in the petty conflicts between the neighbours. Tiny incidents are blown up into outright victimization, while the others try to involve Trelkovsky in a plan to drive out another tenant for making too much noise. Trelkovsky begins to feel the neighbours are forcing him to lose his own personality and take on that of Simone. Soon he starts to smoke Simone’s cigarettes and then dress up as her, but fears that this will culminate in his repetition of her suicide.

Roman Polanski first emerged as a directorial force in the 1960s, making several surreal shorts and the interestingly charged thriller Knife in the Water (1962) in his native Poland. Polanski then came to England to make the stunning Repulsion (1965), a subjective portrait of mental illness, which is arguably his best film. He followed this with other works like the black comedy Cul de Sac (1966) and the Hammer horror spoof The Fearless Vampire Killers (1967), before being brought to the USA by William Castle to make the highly influential occult film Rosemary’s Baby (1968). Polanski followed this success with other works like MacBeth (1971) and the classic Chinatown (1974).

This is also the period that Polanski’s life began to get complicated – with his wife Sharon Tate being murdered by the Manson Family in 1969, followed by Polanski’s flight from justice in the USA in 1978 to avoid prosecution for having sex with a thirteen year-old girl, he seeking refuge in France and not having stepped back on American soil since.

The Tenant was the last film that Polanski made before his European exile began. The period subsequent to the move to Europe, which has included films like Tess (1980), Pirates (19860, Frantic (1988), Bitter Moon (1992), Death and the Maiden (1994), The Ninth Gate (1999), The Pianist (2002), The Ghost Writer (2010) and Carnage (2012), although it has some notable successes, is generally regarded as uneven, with Polanski failing to hit the great acclaim that his earlier films received.

The Tenant is one of Roman Polanski’s least recognised films. It is a return to Repulsion territory. There is much in common between the character of Trelkovsky that Polanski himself plays here and Catherine Deneuve’s Carol in Repulsion – both characters are foreigners living in another country and both are paranoid and subjective films set in large apartment blocks where it seems that the walls of the apartment equal the walls of the protagonist’s mind as Polanski blurs in and out of madness, leaving us unable to be sure what is real or what is an hallucination being perceived by the protagonist.

The Tenant also makes an interesting film to read in term of Roman Polanski’s own life – he, like the character he plays, is a Pole who went to live in Paris very shortly after the film was made. His other horror films – Repulsion, Rosemary’s Baby – like The Tenant, see the apartment as a home of paranoia and madness. You could extend the analogy further and compare Repulsion, Rosemary’s Baby and The Tenant to Polanski’s The Pianist, where Adrien Brody’s protagonist, a Jew living in Poland under Nazi occupation, is reduced to hiding a pitiful, starving existence hiding in cubbyholes and the bombed-out ruins of buildings where he cannot be sure whether the people he encounters are friend or foe or will betray him. Polanski himself grew up in the Warsaw ghettos as a Jewish child under the Nazi occupation and survived by hiding in the countryside and with other families after his parents were taken to the concentration camps, so perhaps one can see the very personal nature of the recurrent themes of isolation, paranoia and the feeling that the apartment is an alien world in his work.

There is a compulsive atmosphere to The Tenant. The oppressive grey surroundings of the apartments and the fanatical concerns about silence from the other tenants contain a genuine claustrophobia. The scheming plots over matters of extraordinary pettiness and inexplicable conspiracies that go on among the neighbours to gang up on others make The Tenant probably the first Kafka-esque horror film.

The shocks that Polanski envisions are vivid and scary – the sudden eerie zoom in on the bathroom across the courtyard as the mummified figure removes its bandages to reveal the face of dead Dominique Poulange; or the ball lit from beneath bouncing up and down outside the window that suddenly turns into a human head. There is an inexorable feel to the film as Polanski, in the same way that he placed us inside Catherine Deneuve’s mind in Repulsion, takes us along with Trelkovsky as his entire identity is seemingly subsumed, to eventually arrive at a haunting twist ending.

The film also falters somewhat. The paranoia theme is beautifully conveyed but the images of Roman Polanski prancing about in drag, strangling himself and talking in falsetto to one of his high-heel shoes are exceedingly silly. The film teeters between a superbly paranoid and oppressive atmosphere and these somewhat risible moments that drag us out of it. Nor is Roman Polanski quite right in casting himself in the central role – he seems too perky and not mousy enough for the part. However, Isabelle Adjani, Shelley Winters and Melvyn Douglas are all good, forsaking star allure to turn in convincingly downbeat roles.

The film is based on La Locataire Chimerique (1964), a novel by the satirist Roland Topor, who was also a Polish émigré who lived in France. Throughout his life, Roland Topor worked as a novelist, film writer, actor and stage director. He was part of the Panic avant garde theatre movement in Paris in the 1960s, along with other luminaries such as Arrabal (Viva La Muerte) and Alejandro Jodorowsky, director of El Topo (1970). On film, Topor wrote several surreal animated short films for Rene Laloux, Les Temps Morts (Dead Times) (1966), a satire about death in culture, and Les Escargots (The Snails) (1965) about an invasion of giant snails, and then the animated sf feature film Fantastic Planet (1973). Topor also co-wrote the German film Die Hamburger Krankheit (The Hamburg Illness) (1979), a political satire about the release of a virus. Topor also made acting appearances in Maurizio Nichetti’s comic satire Ratataplan (1979) and as Renfield in Werner Herzog’s Nosferatu the Vampyre (1979); as well as writing and art directing Marquis (1989), a hilariously obscene puppet retelling of the Marquis de Sade story.