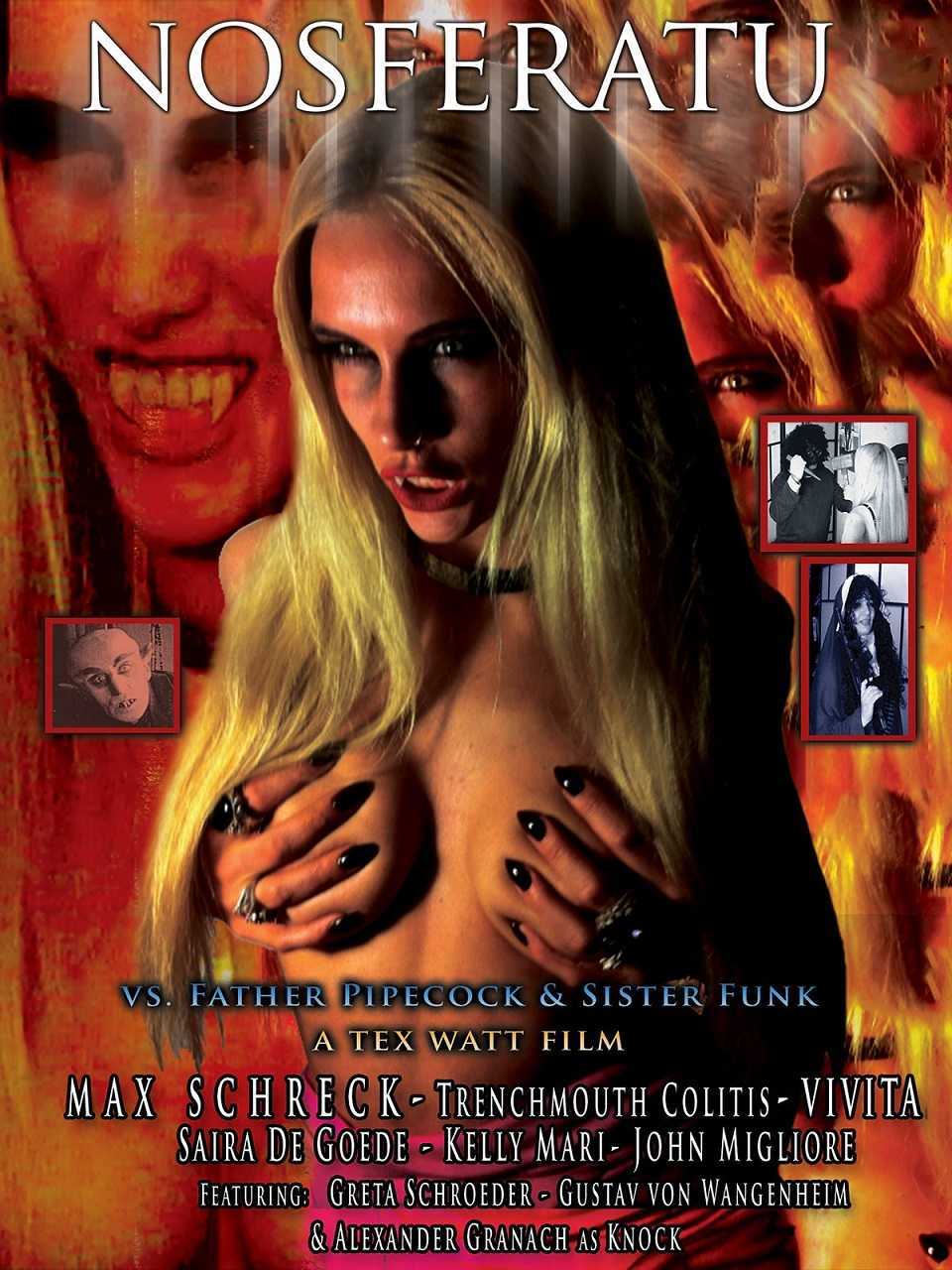 In the quiet German town of Bremen, Johannes Hutter is assigned by his boss Knock to travel to Transylvania to sell a property to Count Orlock. He bids goodbye to his wife Ellen and makes the journey. He is welcomed by the rat-like Orlock who turns out to be a vampire. As Orlock imprisons Hutter, the Vatican monster hunter Father Pipecock, aided by the gun-toting Sister Funk, invades the castle to eliminate Orlock’s vampire wives. Taking over the ship Empusa and devouring its crew, Orlock arrives in Bremen and overruns the city with his plague of vampirism.

Tony Watt may lay claim to being possibly the worst director currently at work in the world. A former organiser of Toronto’s Twisted Sinema exploitation festival, Watt first appeared with the mind-boggling Frankenpimp (2009), an excruciating film dragged out to three plus hours that may well be one of the most agonising watching experiences I have ever had – all deliberately bad acting, racial caricatures, cartoonish sound effects and fart noises run together with a mishmash of exploitation genre elements in a near-incoherent plot. Little improved with Watt’s subsequent films Vixen Highway 2006: It Came from Uranus! (2010) and Acid Head: The Buzzard Nuts County Slaughter (2011), which offered more of the same.

Nosferatu vs Father Pipecock & Sister Funk is different than most of Tony Watt’s films. Where these others are films that quote classic exploitation cinema and set out to be as mind-numbingly bad as possible in every way, here Watt has sourced another entire film and simply laid voice and joke tracks over the top. This is something that horror hosts of the 1970s and 80s would habitually do – insert themselves into or interrupt horror films with corny jokes. This reached a nadir with Mystery Science Theater 3000 (1988-99, 2017- ), which took classic B and bad movies and wrote them over with smartass jokes and jeered at their technical shortcomings. The modern incarnation of this is cinematic screenings with live hecklings.

There are a few additional scenes that have been filmed but essentially what we have on screen is a Mystery Science Theater 3000 version of Nosferatu (1922). This is a classic that was arguably the world’s first vampire film – an uncredited ripoff of Bram Stoker’s Dracula (1897) – and created the indelible image of Max Schreck’s rat-like vampire. In that the original Nosferatu is now in public domain, Tony Watt has simply taken a print of this and written his usual bad racial caricatures, fart and clonk sound effects and the like over the top of it. The film’s equivalent of Renfield is dubbed over with a broad and brassy Noo Yoik accent like some kind of mobster turned comedian (something that seems oddly appropriate for the way Renfield is played in Nosferatu), while other characters deliver their roles in fake British accents or like Monty Python charwomen with fake drag falsettos. Even the musical score that Nosferatu gets is now comprised of open source excerpts of classical music.

In the handful of original scenes shot for the film, Watt turns up as Father Pipecock, which seems something like a classic Hammer-styled vampire hunting priest conducted as a horrendous Black and White Minstrel Show version of a blaxploitation hood where Watt plays the part with ridiculous stovepipe hat, thick glasses and a girly falsetto. Even though these scenes only comprise a matter of minutes, Watt’s agonising bad acting, silly voices and cartoon sound effects manage to go on and on and on. There is the occasionally amusing line like when Ellen greets Orlock’s classic death scene in the sunlight: “You idiot – vampires don’t sparkle.”

Yet for all his appropriation of a classic like Nosferatu, Tony Watt oddly fails to fully turn it into another of his bad films. In that what we are watching is essentially 98% of the original film on screen, it, despite the addition of its bad sound effects, is there enough that the creepy magnificent power that the original had still comes through. Try as he might to ridicule it, Tony Watt is not able to take that away from the original.