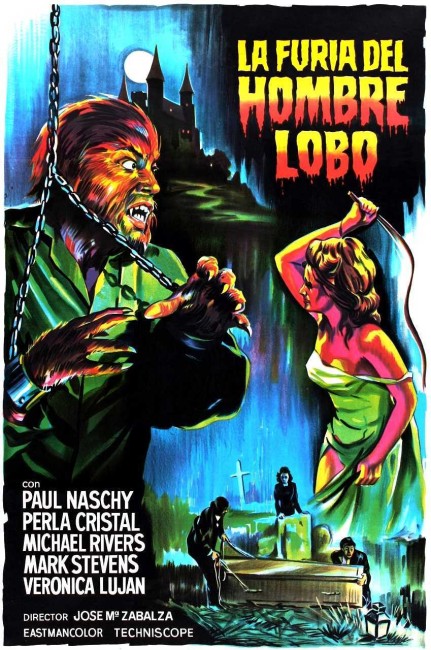 Waldemar Daninsky has returned from an expedition to Tibet and resumed his professorship. He has confided in colleague Dr Ilona Ellman that his encounter with the Yeti in Tibet has turned him into a werewolf. Someone then slips Waldemar a note telling him that his wife Erika is having an affair. Waldemar transforms into the wolfman and kills both Erika and her lover, before he is struck down by a lightning bolt. Ilona digs up Waldemar’s coffin and brings him back to life in her castle laboratory. There Waldemar and Ilona’s assistant Karin discover that Ilona is conducting experiments and creating disfigured mutants.

Spanish actor Paul Naschy (1934-2009) gained fame as a horror icon during the 1970s after his first appearance in Frankenstein’s Bloody Terror (1968). A lifelong horror fan, Naschy wrote the script for the film under his given name Jacinto Molina. He was then persuaded to take the lead role of the wolfman Waldemar Daninsky where he adopted the pseudonym Paul Naschy to help sell the film to English-language audiences. The wolfman became Naschy’s signature role and he went onto play the part in nine other films (see below for the other Waldemar Daninsky films), as well as play a host of other roles.

The chronology of the Waldemar Daninsky films is highly confusing, depending on whether you regard the release dates or the production dates as the order of the films or not. It would appear that The Fury of the Wolfman was made in 1970 but not released until 1972. The Wikipedia entry (which goes by production date) places it as fourth in the series before The Werewolf vs the Vampire Woman (1971). On the other hand, if you go by the release dates then Fury becomes the fifth film in the series after Vampire Woman, which was released a year earlier than Fury.

There is also brief footage at the start that flashes back to Daninsky in Tibet encountering Yeti, which would appear to connect up to or be recycled footage from the subsequent sequel The Werewolf and Yeti (1975) – however, that is listed as the eight film in the series and was not released until 1975. To further add to the confusion, both Fury and Yeti have conflicting accounts of the Yeti – here Daninsky becomes a werewolf due to his encounter with the Yeti, whereas in the other film he is a werewolf who fights the Yeti. This also contradicts the origin story given in the first film, which took place in the 19th Century and had Daninsky being bitten for the first time, as opposed to this which is set contemporary and has his condition a result of attack by a Yeti.

Much of this is explained by the fact that Fury of the Wolfman was held up and unable to obtain distribution because it was deemed of poor quality. This seems even more evident when it comes to the different ways I came to watch the films. I was able to watch the previously released The Werewolf vs the Vampire Woman in beautiful HD dvd quality restoration. Whereas with Fury of the Wolfman I was stuck watching a crap quality YouTube version that appears to have been pan-and-scanned. Moreover, this was a print that has been cut of some seven minutes of the original 90 minutes running time.

As a result, it is difficult to tell what about Fury of the Wolfman can be attributed to the poor quality of the print and what can be put down to shabby filmmaking. What you can say for certain is that it is poorly directed. The photography is shabby and ugly. The direction is choppy, indifferently staged. All of which comes in considerable contrast to The Werewolf vs the Vampire Woman, which makes quantum leaps in quality.

This has Waldemar transforming into a wolfman and killing his unfaithful wife and her lover and then being killed by a very convenient lightning bolt. He is then resurrected from the grave by colleague Perla Cristal who also happens to be a mad scientist who has her own castle where she conducts experiments. It is not clear what she is trying to do but the experiments do leave some mutations, although these are difficult to distinguish from a group of people lounging about the castle partying. Much of the latter half of the film involves lots of running around but little actually happening. The results are dreary.