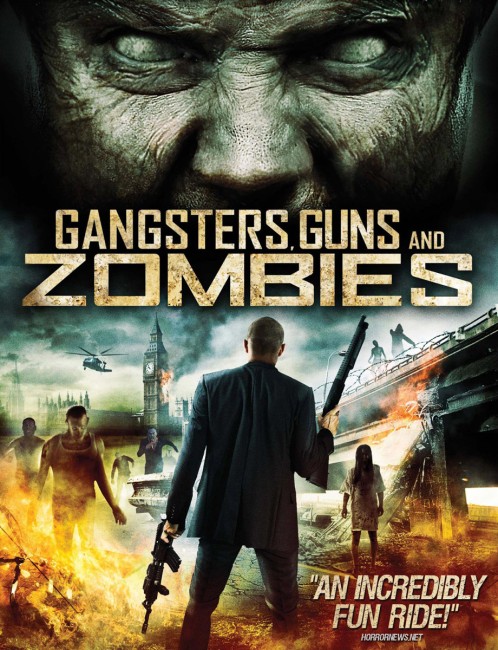 Six men flee in a van with the proceeds of a bank robbery. One of the group Danny has been shot and lies bleeding in the back of the van. All around them, London succumbs to the zombie apocalypse and they must make their way out of the city past the zombie hordes. The leader Tony decides the only option is for them to travel to a safehouse at a secret location in the countryside. However, the journey becomes perilous when they run out of gas and there is nowhere safe to refuel.

The idea behind Gangsters, Guns and Zombies is the amusing one of mashing up the British gangster film as patented by Guy Ritchie – see Lock, Stock and Two Smoking Barrels (1998), Snatch. (2000), Revolver (2005) and RocknRolla (2008) – with the zombie genre. The idea has a certain appeal and indeed also formed the basis of Cockneys vs Zombies (2012) that came out the same year.

On the other hand, Matthew Mitchell fails to quite make it work. For one, he doesn’t do enough to mimic the distinctiveness of Ritchie’s wry tough guy characters. We get a bunch of gangsters in the midst of a caper who are all characterised by an individual quirk (sort of), although most of these soon get forgotten and you just end up with a bunch of squabbling, slightly inept criminals. There is no playing them off each other in Ritchie’s kinetically over-the-top style, nor much in the way of twists and turns. Mitchell has also set out to engage in the gonzo genre mash-up but somehow forgets the comedy elements. In fact, bar the occasional quirk, Gangsters, Guns and Zombies could mostly play out as a regular zombie film.

By very dint of the fact that we spend 90 minutes with these characters, they eventually settle in with a certain amiability. Things perk up with the introduction of Cassandra Orhan, who becomes a love interest, and her shotgun-wielding grandmother Jennie Latham. It passes along as an average zombie entry, even at times almost approaches the not bad, although eventually settles in as being unmemorable overall.

Gangsters, Guns and Zombies was a directorial debut for British director Matthew Mitchell who has subsequently stayed in horror territory with the likes of It Never Sleeps (2014) and The Rizen (2017).