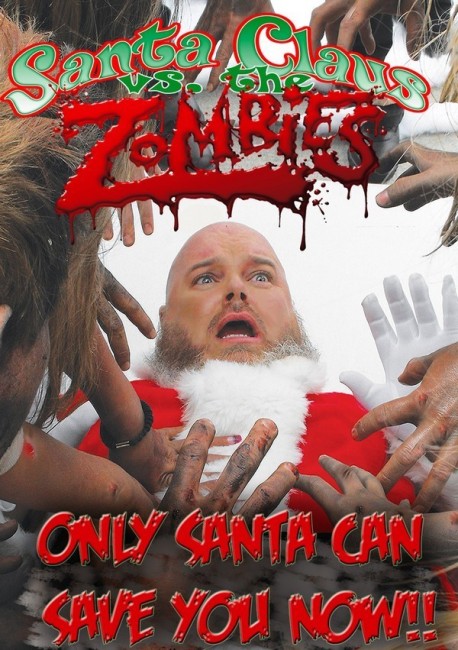 In Southern City, Phil and his wife Jennifer host several family members and in-laws for Christmas dinner. For the occasion, they have hired actors to play Santa and two elves. Just after Phil kicks out his father-in-law Dick for interfering in his small business, they are attacked by zombies. As they board themselves in the house from the zombie onslaught, the three actors realise that they are the real Santa and elves but have forgotten their true identities. Meanwhile, in his bunker, President Stone tries to deal with the zombie crisis overtaking the nation. When radio contact is made with Phil, The President realises that rescuing Santa would be good PR. However, the mission is sabotaged by General Dorman who is determined to obliterate the zombies with a nuclear attack and tries to conduct a coup when thwarted.

There are many examples of classic Christmas movies – It’s a Wonderful Life (1946), Miracle on 34th Street (1947), A Christmas Story (1984), various screen adaptations of A Christmas Carol (1843). On the other hand, for every classic there are a dozen utterly bland Christmas themed tv movies churned out every Yuletide season. Not to mention a good many B-budgeted films that aim to be Christmas classics but end up missing by a mile – think of flops like Santa Claus (1959), The Christmas That Almost Wasn’t (1966), The Christmas Martian (1971) and Santa and Sons & Daughter! (2005). Not to mention the notorious Santa Claus Conquers the Martians (1964), which is widely considered to be one of the worst films ever made. We are far from immune to bad big-budget Christmas films too – does anybody remember the disastrous flop of Alexander and Ilya Salkind’s colossally over-budgeted Santa Claus – The Movie (1985)?

There is a smaller number of anti-Christmas films. You could look to the scabrous Bad Santa (2003) or Henry Selick’s sweetly charming Gothic masterpiece The Nightmare Before Christmas (1993) and the bizarre Finnish Rare Exports (2010) about the uncovery of a Santa Claus monster. In particular around the 1980s, there was a spate of Christmas-themed slasher films with the likes of To All a Good Night (1980), Christmas Evil/You Better Watch Out (1980) and Silent Night, Deadly Night (1984) and modern variants such as Black Christmas (2006), Santa’s Slay (2006), Silent Night (2012) and All Through the House (2015).

The very concept Santa Claus vs. the Zombies comes bubbling with possibilities. You have the vague hope that the film might hit the absurdly entertaining stride of something like the great Harlan Ellison short story Santa Claus vs S.P.I.D.E.R. (1968) wherein Santa was a government agent fighting an international spy organisation. Unfortunately, the film collapses down into extremely bad movie stakes within a very short space of time. One supposes this is kind of inevitable when the film has Santa Claus Conquers the Martians playing on tv in the background in the middle of the film – usually filmmakers include their favourites when they quote other films and doing so gives you the impression that this film has set its ambitions rather low.

The film has been shot with production values and acting that almost completely resembles an amateur film. In the opening few scenes alone, amid the forced artificial bonhomie of the family get together, Russ Croley’s performance as the father-in-law hits some excruciatingly shrill bad acting notes. There is the utter laughable bizarreness of the subsequent scenes where Santa (Billy W. Blackwell) and his two elves sit around the living room and come to the realisation that they aren’t actors but are the real Santa and elves and that they have somehow forgotten who they are.

Santa Claus vs. the Zombies is one of the great exploitation titles of all time. It comes with a promise that could have made for a great B movie – Troma could have had a field day with the possibilities. Perhaps the biggest disappointment is that the film does almost nothing with the concept. You expected the film, even if it had little sophistication, to have something like Santa wielding a shotgun, drenched in gore, blowing away hordes of zombies and he and the elves flying around on the slay saving humanity. Alas, Santa and the elves spend most of the running time sitting on the family’s living room couch … well, doing not much at all. Most of the action seems to concern The President trying to arrange the rescue of Santa as a national morale booster. Indeed, during the latter half of the film, Santa and the family are largely forgotten about and the film centres around The President and his cabinet trying to get a grasp on the situation and facing a coup from a warmongering general. You have to deal with the painfulness of scenes like where the President’s daughter sits on his lap during a Cabinet meeting and throws a tantrum demanding that she get her own pet zombie.

The film seems only fitfully interested in the horror aspect. We get a few siege scenes as the zombies try to batter into the house at the start. After that, apart from some very sporadic zombie attacks through the rest of the film, there is almost nothing until the climactic scenes. What stands out about these is the utter amateurism of the fight scenes and zombie attacks, which feel like they have been staged by high-school kids (well actually kids would surely do so with more enthusiasm than this). The film is almost entirely goreless and the makeup effects on the zombies look utterly unconvincing.