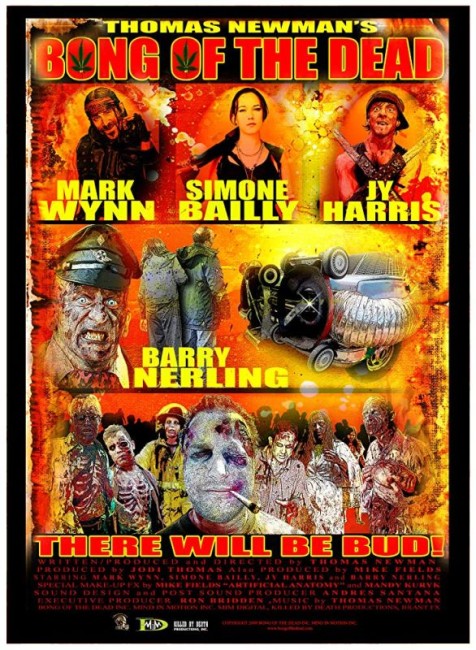 A meteor strike causes hordes of zombies to arise everywhere. Six months later, the government has safely corralled all the zombies inside Danger Zones. Marijuana grower Edwin shows his best friend Tommy an amazing crop of powerful new weed he has grown using zombie brains as fertiliser. After smoking all of this, they realise that they are out of fertiliser and need more zombie brains. The only choice is for them to drive into the Danger Zone and get more. They are captured by the zombie Alex who has world conquest plans but make an escape. Stopping by at a seemingly abandoned gas station, they encounter tough female survivor Leah Kroker. With their car broken down, she reluctantly allows them to stay.

Bong of the Dead is a debut feature for Thomas Newman. Newman is a Canadian filmmaker who by his own words was obsessed with making it in the film industry. Since leaving school, he threw himself into working in the makeup effects department of British Columbia-shot tv series such as The X Files (1993-2002, 2016-8) and Millennium (1996-9) and on feature films like Disturbing Behavior (1998) and Lake Placid (1999). Newman financed, shot and edited Bong of the Dead himself over a two year period.

Bong of the Dead is not even the first horror film we have had about marijuana – there was the earlier Ticks (1993) wherein the title creatures were grown oversized by steroid-enhanced marijuana, as well as the totally whacked-sounding Full Moon film Evil Bong (2006) about a malevolent joint, which also had a sequel Evil Bong II: King Bong (2009). Around the same time as Bong of the Dead, there was also the very similar Zombie Drugs (2010).

Bong of the Dead kicks in with a considerable degree of professionalism. It has a slick look that sets itself well above most of the aforementioned zombie films, which usually come with their tatty low-budget ends showing through. Thomas Newman has a gonzo approach to the material that places Bong of the Dead into the same territory as the other gem of wacky exploitation homage that emerged from Canada of recent – Hobo with a Shotgun (2011).

Unfortunately, Bong of the Dead never quite sustains it. The promising opening starts to collapse as soon as we are introduced to the two main male characters – Mark Wynn’s dope dealer and his best friend Jy Harris. I always have a problem with films – even comedies – that ask us to sympathise with characters that are persistently moronic – and here the two characters and their stoner hijinks quickly begin to tire. In particular, Mark Wynn gives an annoyingly weasly, nasal performance that stands out as someone trying badly to affect a cliche of a stoner. You could tolerate such a character if they were relegated to a wacky supporting role but the fact that Wynn is granted the most screen time out of any of the principals tends to work against the film. The film does pick up considerably with the introduction of Simone Bailly’s Leah (incidentally the most experienced actor among the cast list). As the two characters comment in their constant lustings, “she is smoking hot.” Bailly enters tough, assertive and ready to kick ass, entirely owning the screen as though determined to make the world notice her by the fierceness of her glare alone.

Thomas Newman makes some occasionally interesting efforts to shake the zombie film up – a pregnant zombie woman giving birth to a zombie child (which is then promptly eaten); topless zombie lesbians making out (it’s that kind of film). One of the more interesting ideas is of a zombie leader (Barry Nerling) who is trying to organise the dead into an army under him. Unfortunately, this is also an idea that fails to work – all the other zombies in the film are played as the same stumbling mindless figures they always are and it seems incongruous to suddenly have one that has a semblance of brains, even the ability to crack witticisms and taunt the protagonists.

The other complaint is that the middle of the film gets sidetracked. The ‘bong of the dead’ idea is set aside soon after it is introduced – for all the importance that the title gives it, this turns out to be no more than an idea to hook the film on in giving the two characters a reason to travel into the Danger Zone to get more zombie brains as fertiliser for their marijuana crop. Which only seems the failure to fully use a potentially wacky and completely off-the-wall concept. The other problem is that once the film introduces Simone Bailly, it comes to a virtual standstill for about 40 minutes. The zombie/splatter aspect is not quite abandoned but is set aside for this time while the film focuses on the hijinks of the trio getting stoned, Simone Bailly’s shower arrangements, and most of all the two males lusting over her and her various insults/putdowns of them.

Towards the end, Thomas Newman remembers to get back to the zombie film that everybody came to see. The film reaches a gore-drenched climax with the trio wading into action against a horde of zombies. Here however, you can see that Thomas Newman is less making a zombie film than he is paying homage to other films. The scenes with the heroes wading into attack against the zombies through a flood of gore using jury-rigged lawnmowers is a clear and obvious quoting of the climactic scenes from Peter Jackson’s Braindead/Deadalive (1992); the end gag with the best friend’s fate on the shower treadmill seems modelled far too closely on the end of Shaun of the Dead where Simon Pegg keeps zombified best friend Nick Frost around the house. Similarly, Simone Bailly’s emergence in shorts, combat boots and with guns strapped to her stockinged leg seems too obvious a homage to Lara Croft, Tomb Raider (2001). Though Thomas Newman does try to compete with Peter Jackson in these scenes, the meagre zombie horde and showdown he provides, though very gory, clearly does not have the budget to compete on the same scale (the film’s website boasts that Bong of the Dead was made on only a $5000 budget). There is also a mid-credits sequence that goes on far too long where villain Barry Nerling is resurrected as a cyborg.