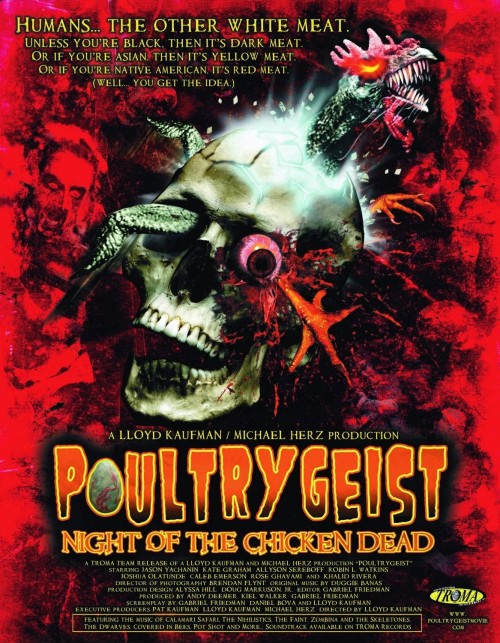 In Tromaville, New Jersey, high-school sweethearts Arbie and Wendy break up as she goes to college. One year later, Arbie encounters Wendy who has returned to town and is taking part in a protest against the construction of an American Chicken Bunker franchise outlet on an old Indian burial ground. He is shocked to discover that Wendy has abandoned him and is now a lesbian. To defy her, he goes into Chicken Bunker and applies for a job as a counter girl. However, the chicken has become infected by mutant eggs and causes whoever eats it to mutate. As General Lee Roy, the Chicken Bunker head, arrives, the staff are being gorily killed by mutations run amok. Soon Arbie, Wendy and the remaining survivors are forced to lay siege as they are surrounded by hordes of customers turned into zombie chickens.

Poultrygeist: Night of the Chicken Dead may yet get the award for the most wilfully absurd genre title ever devised, beating out the likes of The Incredibly Strange Creatures That Stopped Living and Became Mixed-Up Zombies (1964), Slave Girls from Beyond Infinity (1987), Sorority Babes from the Slimeball Bowl-O-Rama (1987), Jesus Christ: Vampire Hunter (2001) and Mega Shark vs Giant Octopus (2009). Then again, this is fairly much business as usual for Troma Films who love to come with outrageous and wacky titles – I Was a Teenage TV Terrorist (1985), Fat Guy Goes Nutzoid (1986), Surf Nazis Must Die (1987), Stuff Stephanie in the Incinerator (1989), Strangest Dreams: Invasion of the Space Preachers (1990), Chopper Chicks in Zombietown (1991), A Nymphoid Barbarian in Dinosaur Hell (1990), Fertilize the Blaspheming Bombshell! (1992) and The Killer Condom (1997) to name but a selection.

Poultrygeist: Night of the Chicken Dead is one of the handful of opportunities upon which Troma head Lloyd Kaufman has stepped behind the camera, he having also directed the likes of The Toxic Avenger (1984), Class of Nuke ‘Em High (1986) and Troma’s War (1988) under the pseudonym of Samuel Weil, and under his own name all the Toxic Avenger sequels, Sgt Kabukiman NYPD (1990), Tromeo & Juliet (1996) and Terror Firmer (1999). Kaufman makes numerous cameos and acting appearances in Troma’s and other people’s films. Here, for instance, he plays the part of the older, more cynical version of the hero who turns up partway through.

Poultrygeist: Night of the Chicken Dead opens with a typical lack of Troma subtlety – Jason Yachanin and Kate Graham are making out in a graveyard, unaware of hands slowly rising from the graves all around them, assuming these to be the two of them groping the other in the midst of passion; he starts enjoying it as he gets a zombie’s severed finger impaled up his ass; they are then joined by an axe-wielding maniac (John Katyus) who stands over them jerking off and grabs Yachanin’s underwear as he flees, before a zombie arm penetrates the maniac’s ass and comes out his mouth to snatch the pair of briefs.

Kaufman readily plunges into areas of decidedly questionable taste – like having a woman short-order cook who is clearly an Islamic suicide bomber and is constantly referred to by derisive names such as “al-Jazeera”, while African-American Joshua Olatunde undergoes mutation to be resurrected as the ‘Blackened Cajun Chicken’. There is a climax where the survivors realise that because the chicken mutations come from an Indian burial ground, they can be despatched by the Indians’ greatest weakness – alcohol. This seems to be very much a Troma film post-9/11, one designed as an equal opportunity offender, insulting both liberals and rednecks, anti-Americans and pro-Americans, not to mention taking wide potshots at everybody from lesbians to Muslims.

Poultrygeist: Night of the Chicken Dead is a film that becomes so persistently moronic and wilfully offensive that its surrealistic excess eventually becomes applaudable. At one point, we see the redneck (Caleb Emerson) trying to have sex with a chicken and it coming to life and attaching itself to his dick, spraying the entire room with blood. Later there is the deliriously nonsensical image of Caleb Emerson with a broom stuck up his ass stumbling along with it hanging out the other side like a giant dick (“my wood pecker”), before he mutates into a chicken with feathers and a beak sprouting out of his face.

We also get out-and-out bad taste scenes like where we see a very fat man sitting on a toilet to take a dump where Lloyd Kaufman has his camera looking up from inside the toilet bowl and we have to watch a shit-covered ass coming to sit down, followed by the man exploding and covering the entire room in shit as the mutant bursts forth. Kaufman heads into absurdly over-the-top surrealism, including such characters as a talking gay hamburger – “America isn’t ready to accept a gay chicken sandwich.”

The film readily relishes the gore and climaxes on a free for all with the staff hacking off limbs to serve up as thighs; a face being ripped off and eaten “I love the skin”; another face fed into a meat slicer; a head torn off and cracked on a grill; a set of testicles ripped off and thrown in the fryer; guys laying eggs out of their asses; and women’s breasts that mutate into fried eggs.

The film features some rather clever song-and-dance numbers that include hilarious rhyming couplets: “You old farts are depressing/Now where’s the ranch dressing?”. At one point, Lloyd Kaufman even stages a number with a dorm room filled with singing and dancing topless lesbians.