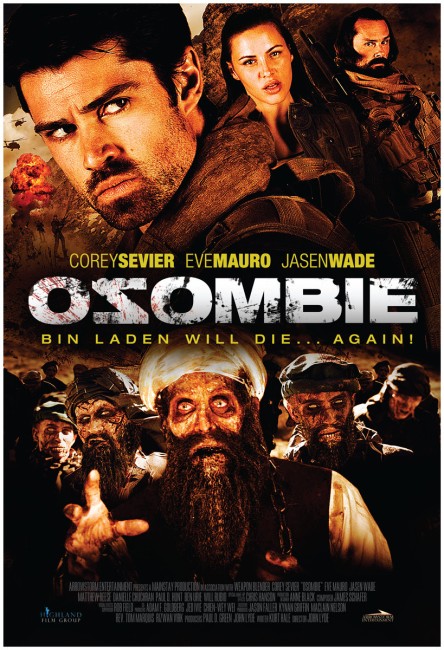 A group of US soldiers in Afghanistan are having to deal with the latest insurgent weapon – a horde of zombies. Separated from their unit and fighting their own war, they encounter American woman Dusty Miller in the wilderness. She is searching for her brother Derek, a conspiracy junkie who believes that Osama bin Laden is not dead but has returned to life as a zombie. Out in the field, Derek conducts a one-man hunt for bin Laden so that he can personally kill him again.

The zombie film underwent a massive revival during the latter half of the 2000s and into the 2010s. Amid this, Shaun of the Dead (2004) led the way towards an increasingly more comedic approach. Thereafter the zombie film has delighted in conducting a series of bizarre title and conceptual mash-ups with the likes of Zombie Strippers! (2008), Attack of the Vegan Zombies! (2009), Romeo and Juliet vs the Living Dead (2009), Big Tits Zombie (2010), Santa Claus vs. the Zombies (2010), Pride and Prejudice and Zombies (2016) and Attack of the Southern Fried Zombies (2017), among a good many others.

The fact that Oƨombie is another of these wacky title mash-ups is not immediately evident from the title. This is usually either written as Osombie or Ozombie. On the opening credits it is written as Osombie but with the letter ‘s’ reversed to seem like a ‘z’, As becomes apparent, the title is intended as a mash-up of the words Osama (as in bin Laden) and zombie. From the intro scenes, we find that the film is premised around the idea of Osama bin Laden having been resurrected as a zombie.

What we have feels like a mash-up between Zero Dark Thirty (2012) and a zombie film – with a US military unit hunting Osama bin Laden but where he is now a zombie. In actuality, Oƨombie/Ozombie premiered in May of 2012, seven months before Zero Dark Thirty so could not be said to be piggybacking on its success. Even more interestingly, it came out slightly short of one year after the real-life raid that killed Osama bin Laden in Pakistan on May 2, 2011 so must have been directly conceived as a zombie film take on the real-life events made fairly soon after they happened. A film with a premise like this shouts out being played as outrageous as possible – your immediate impression of the film is that it will be something like the appearance of Osama bin Laden at the end of Postal (2007). The surprise of the film is that John Lyde plays most it relatively seriously.

John Lyde is a prolific director (see below) and has made a number of action films that centre around the military in action. As such, he writes and directs some solid scenes and creates some decent zombie action. The film’s best moments though are those where Lyde allows his characters to improvise oddball pieces of nonchalant dialogue, which are often amusingly off-the-wall or surprisingly thoughtful – like a discussion that has never occurred to me before about the question of if zombies spent all their time eating, where is all the zombie shit?

On the other hand, it is clear that Lyde is playing more at a fantasy of soldiers in action than anything that approaches realism. One of the most absurd aspects of the film is Corey Sevier, the most recognisable name present. Sevier seems to have seen this as an opportunity to start promoting himself as an action star and had it written into his contract that he has to spend well over half of the film taking his shirt off as he goes into action. I am sure that any military advisor worth their salt would have told Sevier and Lyde that charging into action to confront an armed enemy with no head and upper torso protection and armed only with your bare hands is surely tantamount to placing a bullseye target on yourself and running across a battlefield yelling “I’m here – shoot me”.

Less appealing is the converse side of all the militarism, which is an Americano-centric assumption that the US military is a force of good and they are liberators of ignorant natives. This may well result from Lyde coming from a naturally conservative, religious background like Mormonism – his other films (see below) demonstrate that he is an active member of the church. There are times the term ‘towelhead’ is thrown around, which I suppose you can argue is just the attitude of the characters. On the other hand, the film doesn’t exactly do anything to distance itself from the attitude of a group of hometown boys having a romp in the foreign desert and their gung go antics. It, for example, celebrates the cocky individuality of the soldiers and asks us to get emotional after various of the group are killed in combat. To add to this, the film’s website even sells Osama bin Laden shooting targets as promotional items!