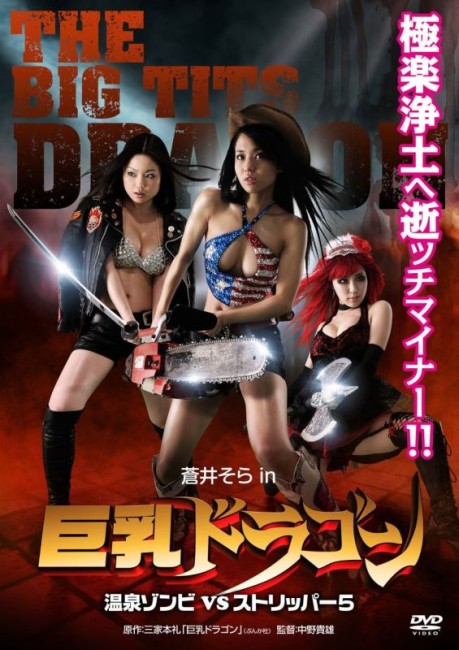 Lena Jodo has just returned to Japan from Mexico. With nowhere to live, she reluctantly accepts a stripping job in a nowhere town for Manjiro, a disreputable figure who owes her money. She and the four others girls on the job face a lack of clientele and are then fooled by Manjiro into working as prostitutes at the local bathhouse. They find a locked doorway in their dressing room that leads down to cellar filled with occult items. There the Goth stripper Maria picks up a copy of the Book of the Dead and reads aloud a spell for raising the dead. They return to work, thinking nothing of it, only to find themselves surrounded by zombies. The girls try to hold the zombies off, as all across the country, the dead are turning on the living, hungry for their flesh.

Big Tits Zombie is based on Kyonyu-Dragon, a horror manga that was originally published in 2004. While the original Japanese title of the film translates as The Big Tits Dragon: Hot Spring Zombies vs Strippers 5, it received the entirely attention grabbing title Big Tits Zombie for its English-language release. This suddenly gained it a word of mouth at various fantastic and horror film festivals.

The basic set up that kicks everything into motion, involving a reading from the Book of the Dead, has largely been borrowed from The Evil Dead (1981). This is now such a generic horror movie raison d’etre that we never even learn why there is an occult shrine under the bathhouse. Like the trash classic Showgirls (1995), the film has a (hardly serious) plot about how the stripper heroines are exploited and hard done by, while at the same time taking all opportunity to show them dancing, taking their clothes off and waggling their butts into the camera. Given the title and concept, there is surprisingly little nudity to the film – a wholly gratuitous scene where two girls are fighting and naturally tear one another’s tops off and a later scene where the zombies tear tops off the same two girls, but nothing more than that.

Big Tits Zombie comes with its tongue planted amusingly in cheek. The film has an amusingly tongue-in-cheek opening that sets the scene perfectly – a girl is surrounded by zombies only for Sola Aoi to arrive, outfitted in hot pants and cowboy boots, and start tearing into the zombies with a chainsaw. At one point, the film lays into amateur sociological readings of horror films, having one of the strippers start mentioning how Night of the Living Dead (1968) was an allegory for Vietnam only to be is punched out in mid-spiel. There are a number of amusingly tongue-in-cheek splatter scenes – zombies playing ping-pong with eyeballs; a scene where zombified men sit around eating sushi off a girl’s naked body but with her entrails in their chopsticks. The scene that caught everybody’s attention was where one of the strippers (Tamayo) turns into a zombie and then arches her back and starts belching jets of flame from out of her pussy.

Big Tits Zombie is undeniably cheaply made – the photography is grainy and sometimes poor, giving evidence of low budget and a hurried shooting schedule. The girls try not very hard to fight convincingly. The gore is often cheap-looking with dummies clearly being used and some exceedingly tatty optical effects. In the otherwise imaginative scene where Io Aikawa splits open and her body turns into a mass of tentacles, including a head that pops out on a long stem with a waggling tongue, you can clearly see the various wires holding the body parts up. Takao Nakano does get everything together in the film’s own cheap enterprisingly low-budget way for the climactic zombie despatches, while the tongue-in-cheek attitude papers over many shortcomings. What you do suspect though is that without its outrageous English-retitling, Big Tits Zombie would have attained little attention. Take the title away and what would be on display only be a mildly amusing zombie film; throw it in and the film is suddenly perceived as a gonzo B-movie classic.