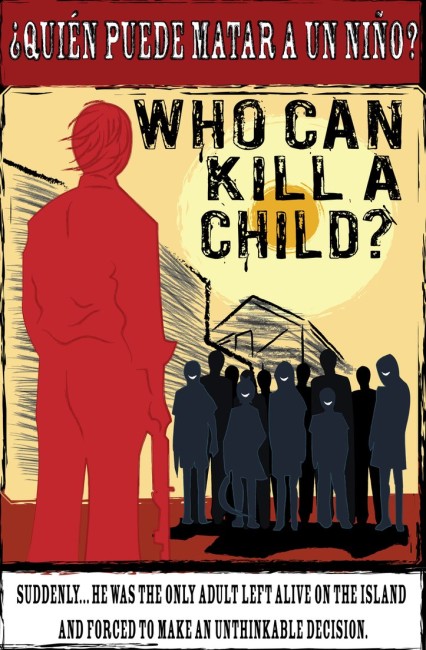 aka Island of the Damned; Would You Kill a Child?

English husband Tom and his pregnant wife Evelyn are on holiday in Spain. They take a trip out to Almenzora Island. Arriving, they find the island strangely deserted, buildings having been left open and abandoned. There are no adults anywhere, just children playing. They then discover that the children have killed all the adults. The children now close in, intending to kill them too.

Who Can Kill a Child? is a Spanish horror film that has gained a reasonable reputation. It operates under a variety of different names – Who Can Kill a Child? being the most preferred, being a literal translation of the original Spanish title. In the US, it was retitled Island of the Damned where the evil children focus was played upon to suggest it was in the same vein as the alien children film Village of the Damned (1960), even though there are no science-fiction elements in the film.

Who Can Kill a Child? was one of only two feature films directed by Uruguayan-born director Narciso Ibañez Serrador. Serrador had lived in Spain since the age of twelve and had worked in Spanish television since the early days. He had directed a good deal of television since the 1950s, although his only other cinematic outing as director was the giallo-styled Gothic The House That Screamed (1969) about killings in a girl’s school. Serrador has however written a number of other genre works, usually under the name Luis Peñafiel, including Spanish tv versions of Rasputin (1958), Ligeia (1959), The Phantom of the Opera (1960), and various films, although none of any particularly high profile. Among these, Who Can Kill a Child? has gained a modest cult and is the one film that Serrador is most known for.

In essence, Who Can Kill a Child? is a single premise film. The entire first half of the film is slow build-up to the unveiling of what is going on. However, once unveiled, that is the only major surprises the film holds – you read any synopsis of the film and you know the hand of cards it holds. Though other people appear throughout, there are only two characters on screen for the whole film – husband and wife Lewis Fiander and Prunella Ransome. One of the more interesting things in this version of the film I saw – it may differ in other versions – is that all of the Spanish language has been left unsubtitled. This makes Who Can Kill a Child? not unlike And Soon the Darkness (1970), which was about English tourists stranded on the European continent, not just in trouble with a lurking killer but linguistically struggling to communicate with the locals.

Narciso Ibañez Serrador creates unsettlingly sinister images – Lewis Fiander finding a little girl laughing and then discovering that she is battering an old man; he coming across the children playing piñata with a corpse (a reflection of a scene that we saw more innocently on the mainland); or where they emerge from the cottage to find the children gathered around the cliffs and bay. Serrador creates a more than reasonable tension during the scenes with Fiander and Ransome locked in a room in the hotel as a child breaks in through the grille and Fiander has to make the choice to shoot it. Or later where he has to shoot down the children as they stand sweetly smiling.

The film reaches a highly effective ending undeniably reminiscent of the darkly sardonic one in Night of the Living Dead (1968) where [PLOT SPOILERS] Lewis Fiander is fighting the children off and trying to escape in a boat just as the coastguard arrives where they think he is attacking the children and shoot him, before the children turn on them.

Narciso Ibañez Serrador says he was inspired by Alfred Hitchcock’s The Birds (1963) – and you can see what he has done here, having in essence replaced the birds with children. There are even scenes that consciously mimic those in The Birds – like the scene where Lewis Fiander and Prunella Ransome seek refuge with a woman in a cottage in a bay and emerge to see the children all around the clifftops, just like the images in The Birds where Hitchcock had birds sinisterly looking on and waiting atop power lines and fences. Like The Birds, no explanation is ever offered for the children’s attack.

The opening credits play out against nearly ten minutes of scenes of stock footage from various world wars and atrocities of the 20th Century, each ending with a listing of the number of children killed. This leaves us with the clear implication as the film starts that the attacks by the children are in revenge for the slaughter of their numbers in senseless wars. It should also be noted that much of the idea of the children turning on and eliminating the adults was copied subsequently by the fine British film The Children (2008) and Children of the Corn (1984), although Who Can Kill a Child? does a far better and more unsettling job of playing with the idea than anything in Children of the Corn and any of its sequels.