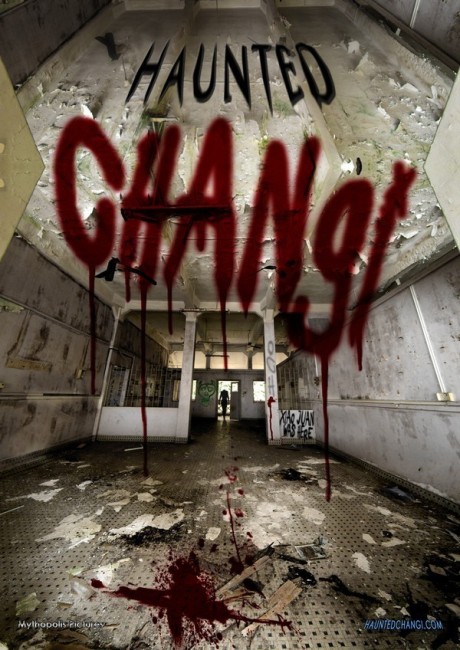 A four-person camera crew decide to make a documentary about the old abandoned Changi Hospital. During World War II, during the Japanese invasion of Singapore, the building was used as a base by the Japanese army and many prisoners were beheaded there. Subsequently, it was turned into a hospital. After being shut down several years ago, there have been numerous reports of the building being haunted. The film crew enter the ruined hospital, filming what they see as they search for evidence of haunted activity.

Haunted Changi is a Singaporean-made venture into the Found Footage genre. The horror genre launched the Found Footage with the sleeper hit of The Blair Witch Project (1999) and has ventured into the haunted house genre several times since with the likes of The St. Francisville Experiment (2000) and especially the big hit of Paranormal Activity (2007). Although in practice, Haunted Changi seems less like a Blair Witch/Paranormal Activity copy and more like one of the pseudo reality tv shows such as Most Haunted (2002– ), Ghost Hunter (2004– ) and Ghost Adventures (2008– ) that follow parapsychologists and mediums around supposedly haunted locations trying to find evidence of activity.

Most of the film consists of the camera crew wandering around the real-life location of the abandoned Old Changi Hospital. These scenes are filled with directorial effects – rapidly flickering editing, sped-up footage, the camera turned on an angle, the addition of creepy sound effects and sinister music – that seem designed to create something spooky where nothing exists. These constant attempts to push what is happening towards eerie and unsettling atmosphere become annoyingly forced. It feels as though Haunted Changi is constantly trying to nudge you with artificially ominous atmosphere rather than is a film that gets on with the business of actually causing an audience to jump. I kept wanting to hope there was something more that Haunted Changi had up its sleeve other than it being filmmakers opportunistically taking advantage of the available location of an old abandoned building.

To its credit, once it gets past these artificial atmosphere-generating effects, Haunted Changi does an okay job generating occasionally spooky atmosphere. There is a fine foreboding sense created in the opening set-up as the narrator tells the story of the hospital during the Japanese occupation in World War II. There is the odd moment where the film sits on a subtle note of ambiguity in suggesting that something might be happening – figures maybe flitting through the background; a perfume in the air before Sheena Chan reveals she is not wearing any; the possible rearrangement of architecture that causes them exit on a ground-floor level when they thought they were on the upper levels. The film certainly gets in one good jump where the kid brought in by the ghostbuster team enters the hospital and runs out screaming.

Unfortunately, the entire film feels like constant build-up without any payoff. There is the appearance of a single Japanese soldier at the end, while something (it is not exactly clear what) happens to the cameraman – but neither of these amount to much. The climactic scene shot through an infra-red camera lens as a body is dragged away is blatantly borrowed from the shock climax of [Rec] (2007). It holds a jolt, although this is also spoiled by the filmmakers showing the same scene at the start – while equally it is not easy to tell what is going on. The end coda about the homeless Chinese woman can be seen coming well in advance.

Haunted Changi is made in English, presumably for the purpose of crossover into international markets, although that said, some of the dialogue is local dialect merged with the English, which makes it hard to understand what is being said.