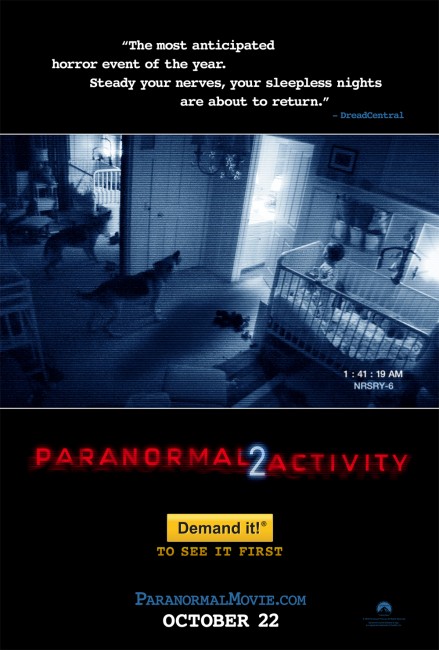 Katie Featherston’s sister Kristi and her husband Daniel Rey have just had a young baby whom they have named Hunter. Soon after, they return home to find the house inexplicably trashed. Daniel decides to have a set of security cameras installed throughout the house. Soon Kristi and Daniel’s teenage daughter Ali come to believe that there is a supernatural force in the house, causing loud bangs and knocking things over. The force becomes increasingly sinister and violent in its actions. Ali starts to believe that they are being targeted by a demonic entity that is demanding the body of their firstborn son.

In 2009, Paranormal Activity (2007), an almost no-budget feature shot by videogame designer Oren Peli in his own home, proved a substantial word-of-mouth hit when it was given a major multiplex release. People were genuinely unnerved by Oren Peli’s creation of an unearthly atmosphere supposedly obtained as a videocamera witnessed a series of spooky happenings. Paranormal Activity enjoyed much of the same success and replicated the similar style of a mockumentary posing as being found footage that The Blair Witch Project (1999) did a decade earlier.

Sequelising such a hit is probably inevitable – indeed, the buzz surrounding Paranormal Activity was such that Brian De Palma was touted as director of Paranormal Activity 2 at one point. However, making a sequel to a mockumentary posing as the real thing is a more difficult task than usual, as Book of Shadows: Blair Witch 2 (2000) found when it tried to follow The Blair Witch Project up and promptly shot a lucrative film franchise in the foot. Book of Shadows‘ problem was that it became too meta-aware and featured not enough of the similar found footage, faux documentary style that hooked everybody in the first film.

Paranormal Activity 2 comes determined not to fall into that same trap. It is caught in the difficult balancing act of being expected to do more of the same and yet having to do things slightly differently to stand as its own entity. As such, Paranormal Activity 2 certainly does this more conservatively than Book of Shadows did – we get a different household, this time a blended family rather than a young couple; the footage is now in colour rather than black-and-white and with added material taken from a handheld video camera. More interestingly, both Katie Featherston and Micah Sloat are back from the original, although this time the film poses as a prequel, postulating that the agency behind the hauntings haunted Katie’s sister (Sprague Grayden) before moving over to their house.

In keeping fairly much to the basics that made the original work, you cannot deny that Paranormal Activity 2 works in all the same ways that the first film did. Director Tod Williams captures the same sense of eerie dread that Oren Peli did. In that much of the film often consists of static camera set-ups passively watching a room where little or nothing is happening, you are, as you were in the first film, constantly scanning the corners of the frame in anticipation of catching something happening. Sometimes this is played with beautifully eerie effect – like the scene where the mobile above the baby’s crib slowly starts turning when nobody is in the room and then stops whenever they come back. There is a creepy scene where Molly Ephriam is locked outside and the unseen force drags the baby up over the side of the crib and it wanders through the deserted house. The film gets a good deal of effect out of all the slams and surprise bangs happening on the soundtrack – Tod Williams gets in at least one jolt that makes the entire audience jump in the scene where Sprague Grayden is in the kitchen and all the cupboard doors suddenly slam open at once. There is no musical score but the soundtrack is constantly alive with a thrumming almost below the threshold of audibility.

The minus side of this is that Paranormal Activity 2 essentially lacks the novelty that the first film had – the sense that what we were watching was documentary footage of something that had actually happened. Notably, Paranormal Activity 2 dispenses with the effect that the first film had in not presenting any end credits to heighten this effect. We know how the original ended and when the sequel heads into more familiar territory with people being bodily dragged out of rooms and locked in the cellar and the end appearance of Katie Featherston, the shocks are more familiar as we know what is going on and what to expect. The film also offers the suggestion that the curse haunting this house was passed over to Katie Featherston and Micah Sloat by Brian Boland and Molly Ephriam a la Curse of the Demon/Night of the Demon (1957), although the way this happens is not made very clear.

Director Tod Williams had previously made the non-genre The Adventures of Sebastian Cole (1998) and The Door in the Floor (2004) and went on to the Stephen King adaptation Cell (2016).