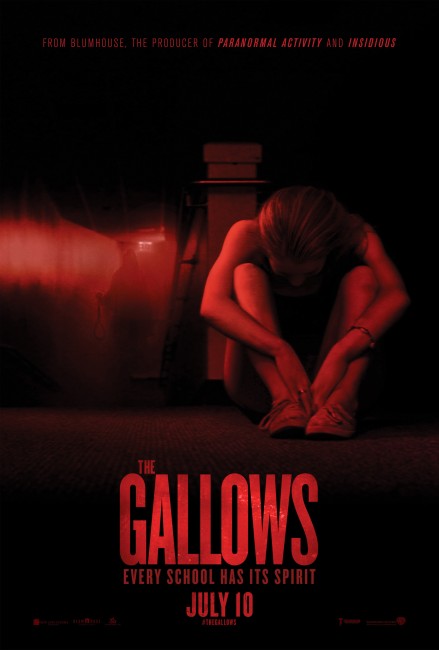 The drama class at the high school in Beatrice, Nebraska are putting on a production of the play ‘The Gallows’ for the first time since 1993. Back then, student Charlie Grimille was tragically hung on stage when the trapdoor of the gallows malfunctioned. Ryan has been given the job of filming the making of the production but is scathing of their efforts. He is unable to understand why Reese Houser dropped out of the football team to take the lead in the play but then discovers this is because Reese has a crush on the lead actress Pfeifer. Ryan persuades Reese that the play is going to be a flop and he could get out of it if they went back into the school at night and vandalised the set. Joined by Ryan’s girlfriend Cassidy, they sneak back in through an open stage door but are discovered by Pfeifer. As they try to leave, they discover that a supernatural force has trapped them in the building and is preventing them from leaving.

Blumhouse, headed by producer Jason Blum, has become a rising production company name in the 2010s, following the substantial successes of Paranormal Activity (2007), Insidious (2010) and various sequels to these, as well as a host of other films (see below). Blumhouse always operates by the dictum of making films on medium budgets – usually under $3-5 million – and aiming for theatrical release. They have enjoyed a number of successes. The Gallows was the first mainstream effort for Travis Cluff and Chris Lofing, two friends who had previously made Gold Fools (2012), which does not appear to have been widely seen. (Cluff also has several scenes on screen here as the bespectacled teacher).

The Gallows quickly transpires as another Found Footage film. It is a surprise, given that the Found Footage genre has become so overplayed in recent years such that most efforts have become cheap dvd-released films made by newcomers, that The Gallows ended up receiving a major theatrical release – and from Warner Brothers, no less. Blumhouse has given it another of their medium budgets and the film certainly looks more professional than the last fifty or so Found Footage horror films that one has seen.

On the other hand, after Paranormal Activity, which is now producing its fifth sequel, Lake Mungo (2008), Paranormal Entity (2009), Gacy House (2010), Haunted Changi (2010), Grave Encounters (2011), The Bell Witch Haunting (2013), The Borderlands (2013) and Paranormal Asylum (2013) to name but a few, the Found Footage haunting has become a particular genre vein that feels like all of its moves have been well and truly worn out. The Gallows enters the game feeling like it has no new ones to add. It even borrows the trick from the first Found Footage film The Blair Witch Project (1999) of giving the characters the same names as the actors.

Certainly, the film holds your interest at the outset. The set-up is obvious – that the high school drama society putting on a play is going to be haunted by the accidental death that occurred two decades earlier – but Cluff and Lofing put a clever spin on this by having the staging of the play being filmed by somebody who is readily injecting his own scathing commentary and ridiculing everything he sees, even later leads the efforts to sabotage the show. This wryly undercuts any expected straightforward approach, plus also serves to provide an acutely penetrating cross-section of the brutality of the hierarchies that exist in an American high school.

The disappointment is that when we get to the haunting aspect, everything – the changing topography of the building, the red herrings, the surprise jumps – runs by the standard playbook. There is one good jump that Cluff and Lofing pull towards the end where Cassidy Gifford is hiding in a shower room, where a hooded figure carrying a noose comes up behind her, she moves forward to adjust the camera unaware of it behind her, looks over her shoulder but sees nothing, only to move back out of closeup and find the noose is now around her neck. There is not much that makes sense in terms of explanations as to why things are happening. Even given the vague idea about Reese Mishler being made to pay for his father’s dropping out of the fateful role in 1993, you are not sure why everybody else is being targeted. The ending offers a modest twist but when the investigating cops start being attacked too, all established sense evaporates.

Travis Cluff and Chris Lofing returned with a sequel The Gallows Act II (2019) and then went on to make the horror film Held (2020) where a married couple are imprisoned in a house and tortured into improving their marriage, as well as produced the desert island horror film .Prey (2019) for Blumhouse and Behind You (2020).