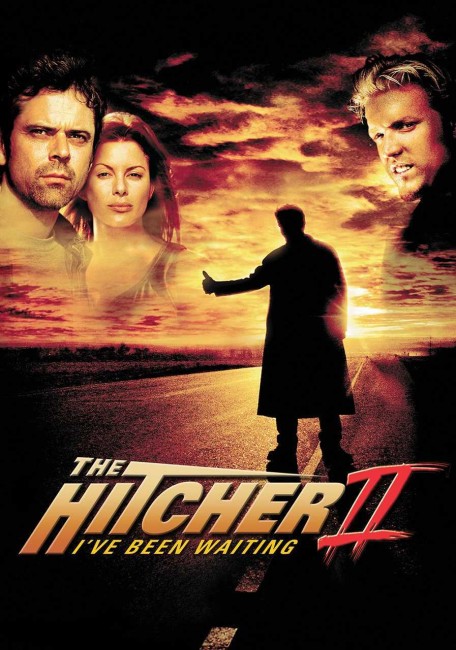 Jim Halsey has become a cop and is now living in Iowa. However, he is still haunted by his experiences in the desert seventeen years earlier. He is suspended from the force after shooting a man that he thinks has a gun. He and his girlfriend, the crop duster pilot Maggie, go to visit his old friend Captain Esteridge in Texas. Once they set out on the highway however, Jim becomes jumpy, seeing dangers and threats everywhere. They pick up a hitcher but Jim becomes so uneasy that he demands at gunpoint that the hitcher gets out. The hitcher subsequently turns dangerous, shooting a cop that pulls them over and then going ahead to kill Esteridge and his wife, leaving the blame for the murders on Jim and Maggie. Jim is shot and killed during a shootout. Maggie must continue on alone as the hitcher plays a deadly game with her, killing victims and in each case leaving the blame for the murders with her.

The Hitcher (1986) was one of the great and underrated psycho-thrillers of the 1980s. It is a surprise that it has not been turned into a horror franchise before now. There have certainly been several attempts to sequelise it, including an Italian psycho-thriller Fear in the Dark (1989) and Hitcher star C. Thomas Howell’s directorial debut Hourglass (1995), both of which were retitled The Hitcher 2 on American shores. Neither were anything more than unconnected films that had been retitled to exploit the popularity of the original. The Hitcher II: I’ve Been Waiting, which comes seventeen years after the original, is the first legitimate sequel. Frankly, they shouldn’t have bothered. In all ways, it is terrible. The Hitcher was made with genuine craftsmanship; The Hitcher II: I’ve Been Waiting is utter hackwork that is made by people who could not have cared less.

The director this time out is Louis Morneau. Louis Morneau made the quite good time travel film Retroactive (1997) but his output has been typified more by the likes of Carnosaur 2 (1995), Bats (1999), Joy Ride 2: Dead Ahead (2008) and Werewolf: The Beast Among Us (2012), as well as the screenplay for Slipstream (2005). Needless to say, The Hitcher II falls down around the level of the latter. The sequel brings back C. Thomas Howell, who has had a career in B movies since the 1980s. Although having brought the star of the original back, the sequel for some reason kills Howell off about 30 minutes of the way in and lets the role of the pursuee be taken over by his girlfriend played by Kari Wuhrer.

For a time, The Hitcher II: I’ve Been Waiting starts out quite promisingly, showing C. Thomas Howell still haunted by post-traumatic stress as a result of his ordeal, being suspended as a cop for shooting someone he thinks is armed and getting twitchy and jumpy the moment they get onto the highway, having flashbacks and thinking perfectly innocent hitchhiker Jake Busey is another psychopath. Here the film briefly suggests an intriguingly different take – that there might not be any other psycho hitcher and that it might all be in Howell’s unstable imagination. Alas, to follow such a route, The Hitcher II would fairly much cheat its audience and thereafter it heads into entirely predictable areas.

In The Hitcher, Robert Harmon directed with masterful suspense, making the film take place as much in our imaginations as it did in the dazzling pyrotechnics being enacted on the screen. Sadly, Louis Morneau has no such talent. All the subtle psychological shocks have been replaced by moronic red herrings jumps – people being scared by dogs and horses, loud amplified noises, or bodies falling out when someone opens a door.

At feeble best, Morneau merely pastiches and copies scenes from the original – the finger served up as a French Fry, the victim tied between two trucks – but without anything that comes remotely anywhere near the effect either scene had in the original. Morneau overuses undercranked shots of clouds scudding across red skies – in fact, we even get footage of clouds scudding across red skies when it is meant to be night time.

Taking over as the title character, Jake Busey (a bad actor at the best of times) is miles away from ever evoking the same sort of menace that Rutger Hauer did in the original. His sum threat amounts to little more than a smirk. The most laughable scene is the diner sequence, which verges on the frequently campy – the counter clerk found with her knitting needles buried in her chest; Busey popping up wearing a chef’s hat and, amid tossing off one-liners, chopping off his own finger with a cleaver and tossing it into the deep frying vat (all without even wincing in pain – mindedly Kari Wuhrer goes through the entire film with a bullet in her leg and even has a water tower collapse on her without feeling any pain or impairment).

Zero imagination has gone into the screenplay – there is no credibility established as to why when C. Thomas Howell gets into a car to drive across the desert for the first time in seventeen years he just coincidentally happens to come across another psycho hitchhiker who, with even more extraordinary coincidence, seems to have decided to copycat the original hitcher’s moves.

The Hitcher was later remade as the equally disappointing The Hitcher (2007), which peculiarly copied The Hitcher II and likewise had Jim Halsey killed off part way through and his girlfriend being pursued by the hitcher.