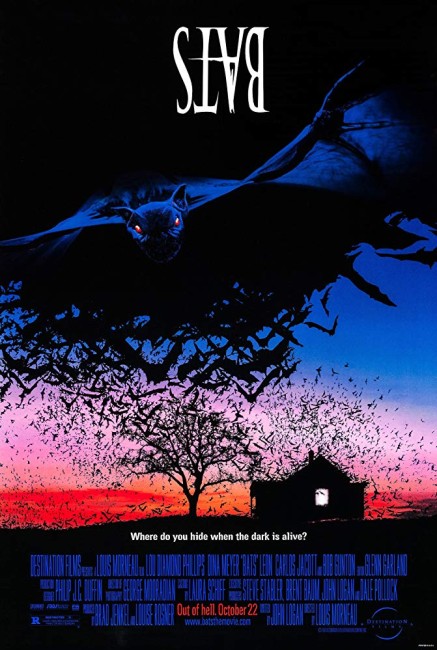 Bat expert Dr Sheila Casper is called in to the small town of Gallup, Texas to consult on a series of bat killings. She discovers that scientist Dr Alexander McCabe has genetically tinkered with normally docile bats to make them more aggressive and intelligent. As they try to figure out how to stop them, the bats overrun the town en masse.

There is yet to be a single worthwhile killer bat movie – think of The Devil Bat (1940), Chosen Survivors (1974), Nightwing (1979), Fangs (2001), Vampire Bats (2005) and sundry cheapjack bats in B vampire movies. However, Bats is almost an exception. CGI allows the convincing production of massed bat attacks and thanks to K.N.B. EFX, the bats look marvelouslly evil creations in closeup, albeit improbably larger than normal.

Unfortunately, while it works more than amply in the technical arena, Bats has a script that feels pieced together out of a constructor set of monster movie cliches – and one written by subsequent high-profile Hollywood screenwriter John Logan too. There is a shadowy conspiracy involving military experiments with the creatures – so shadowy we are never ever granted any explanation of what the military were trying to do; there is a climactic countdown as the hero and heroine race to stop the senseless military bombing of the near vicinity. The script also adds what has become two new cliches of the 1990s monster movie – firstly, the acknowledgment of a more biologically realistic appreciation of the bats’ (or whichever creature is the focus of the script) nature and that they are normally docile but … and, secondly, that genetic tinkering has changed them.

Bob Gunton is written in as a generic mad scientist. His characterisation is so coverall that the only explanation he ever gets as to why he created the bats is “I’m a scientist. That’s what we do.” With enormous predictability, he also gets to be the unhinged member of the troupe that sabotages their efforts at a crucial point and is then torn apart by his own creations while ardently insisting that people do not understand them. Equally, the character of the assistant played by Leon has no other purpose in the script than to provide easy laughs by acting scared about bats – a decidedly silly character attribute for someone who is supposed to work as a lab assistant to a bat expert.

The film is aided immeasurably by Louis Morneau, a director who has risen up through the ranks of routine direct-to-video films like Final Judgement (1992) and Carnosaur 2 (1995) and then made the unexpectedly good time-travel film Retroactive (1997), although subsequently went onto the dire The Hitcher II: I’ve Been Waiting (2003), Joy Ride 2: Dead Ahead (2008) and Werewolf: The Beast Among Us (2012), as well as wrote Slipstream (2005).

Morneau comes close to saving Bats from its cliche-ridden script. Morneau directs the various bat attacks and the climactic venture into the mine with a reasonable degree of atmosphere. The action in these scenes tends to be directed with much in the way of flashing lights and busy camerawork, but Morneau does a fair job. There is also some beautiful dusky photography of the desert town and environs. As a result, Bats sits just between collapsing into B-movie hokum and a routine competence.

Amid the cast, Dina Meyer is typically bland and makes no distinguishing mark. Lou Diamond Phillips affects a Southern accent but, barely even touching the age of thirty, seems absurdly too young to be a small Texas town sheriff.

The sequel, featuring none of the personnel from here, was Bats: Human Harvest (2007) with more genetically engineered bats and set in present-day Afghanistan.