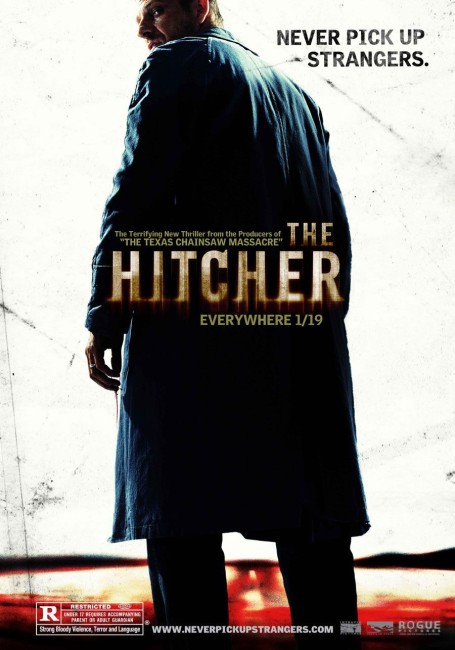 Jim Halsey and his girlfriend Grace Andrews set out to drive from Texas to Arizona for a Springbreak party. While passing through New Mexico, Jim skids to avoid a man standing in the middle of the road in the rain with a broken down vehicle, but declines to stop and help. At a gas station ahead, he asks the attendant to call for a tow truck. The man on the road then gets off at the gas station, having hitched a ride. The man, John Ryder, asks Jim for a ride to a motel and Jim, feeling guilty about abandoning him earlier, feels obliged to do so. Once in the car, Ryder pulls a switchblade knife on the two of them, however Jim manages to kick Ryder out the door. They continue on but then see that Ryder has gotten a ride with a family and catch up to find the family’s slaughtered bodies left in their car. In trying to help the one dying survivor, Jim and Grace instead end up hunted by police, suspected of the murders. Wherever they turn, Ryder comes after them, taunting them as part of a psychological game and leaving evidence to incriminate them for his killing spree.

The Hitcher (1986) was one of the great underrated psycho films of the 1980s. It was an existential horror film wherein C. Thomas Howell’s young hero confronted an enigmatic psycho (Rutger Hauer) who played psychological games with him across the wide open highways of the Midwest. Director Robert Harmon’s conjuration of suspense and dread throughout was masterful. The Hitcher never received much widespread acclaim at the time of its release but built a steady cult reputation on video. It was certainly enough for several films to come out purporting to be a sequel, although the only one to officially emerge was the pathetic The Hitcher II: I’ve Been Waiting (2003), which did feature a return appearance from C. Thomas Howell only for him to be killed early on in the piece and the remainder of the film to feature his girlfriend Kari Wuhrer being pursued across the desert highways by a psychotic Jake Busey.

Expectedly in taking on such a classic, The Hitcher 2007 was greeted with considerable displeasure by fans of the original. To its credit, The Hitcher 2007 is not as disastrously ill conceived as say the remakes of The Haunting (1999), The Fog or The Wicker Man. And it is at least better than The Hitcher II. On the other hand, it sits there squarely in the land of total indifference.

The Hitcher 2007 follows the original closely on most points. There are however some major points of divergence. The most notable of these being that C. Thomas Howell’s lone hero has been replaced by a young couple – Zachary Knighton and Sophia Bush. This is significant in that it serves to push The Hitcher 2007 over into the teen horror territory that most of these modern 00s horror remakes exist in. There are replications of various scenes from the original – the massive car pile-up on the highway; the slaughter at the police station; the scene where the hitcher turns up in the motel room and ties someone between two trucks. On the other hand, a number of scenes have also been thrown out – in particular, the classic scene where C. Thomas Howell lifts a severed finger to his mouth, thinking it a French Fry, and other pieces like the detonation of the gas station and the scene where Rutger Hauer taunts Howell that the bullets in his gun are empty. The scene from the original where the hitcher gets a ride in the back of a family car and C. Thomas Howell races to stop him only to find the family all slaughtered has been replicated and extended with Zachary Knighton and Sophia Bush now driving away in the family car and Knighton trying to save the father’s life before he expires.

The most radical change The Hitcher 2007 makes is that it kills Jim Halsey off – he becomes the one that is torn apart between the two trucks – and the rest of the film is continued by Sophia Bush. This in effect makes The Hitcher 2007 into a remake of The Hitcher II, which likewise had Jim killed off and the film subsequently carried by his girlfriend Kari Wuhrer, rather than of The Hitcher 1986. The point of this, other perhaps than shaking up audience expectations and adding more sexual equality, is debatable. The big let-down about such a change is that the two teens who replace C. Thomas Howell are entirely anonymous and characterless – when it comes to the gun-toting scenes at the climax, Sophia Bush seems only a wimpy young girl who is being required to play a scene where she is totally out of her shallow depths.

One of the successes of The Hitcher 2007 is Sean Bean who works just as well as, if arguably not better, than Rutger Hauer did in the original. Bean gives a performance that is appropriately mad and deranged. The film kicks in (somewhat) once it gets Bean into the car and then amid various idle chat he suddenly asks Zachary Knighton: “How long have you been fucking her for?” to which Knighton cockily replies “How long have you been fucking your wife?” only for Bean to hold up his ring finger and reply “I’m not married. I just want people to think I’m trustworthy.” A couple of seconds later he has grabbed Sophia Bush at knifepoint and pleads with Zachary Knighton: “I want you to stop me … I want you to kill me.” This is a scene that does what a remake should in effectively replicating the original scene while riffing on it to the extent that it creates something new and original. There is the odd effective image elsewhere – like the replication of the police station sequence that pulls back from Sophia Bush sitting in an interrogation room to look through the one-way mirror as a hand suddenly comes up and traces a smiley face over hers in blood.

Director Dave Meyers tends to frequent overkill – it is clearly evident from the opening image of a rabbit being driven over and splattered as it tries to cross the highway or digital images following bugs as they are squished on the windshield, which add nothing to the film except gratuitous gore. Meyers does at least show us the scene where the person is torn in two by the truck in far more gory detail than the original. For no clear reason, Meyers throws in a random dream sequence where Zachary Knighton is asleep in the car and Sean Bean smashes in the window. A film that needs to gets jumps from an audience by throwing in random dream sequences is usually one that is admitting that it cannot get them elsewhere. There are other times that Meyers’ overkill ruins a scene. Case in point is the replication of the highway pursuit scene where the hitcher’s shooting causes several dozen cop cars (and now rather absurdly even a helicopter) to crash. In the original, the scene had breathtaking impact. Here Dave Meyers causes it to become just another overblown action sequence and ruins it entirely by running Nine Inch Nails’ Closer over the top of the action.