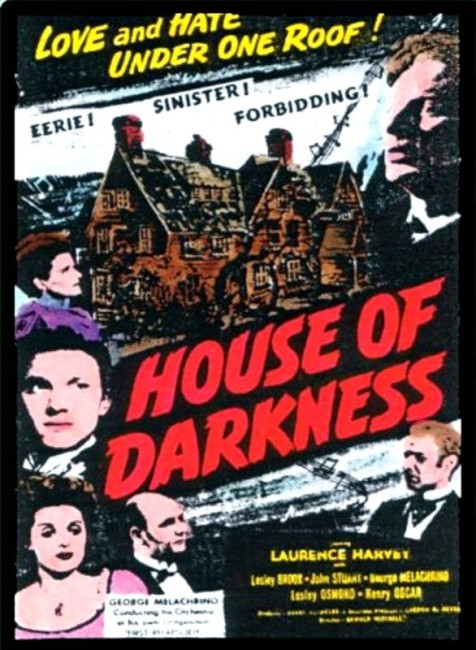 Composer George Melachrino is having a film made of one of his symphonies and relates how he found his inspiration from visiting a haunted house. There he saw the lives of its previous inhabitants re-enacted. Francis Merrimer, deeply resentful of his brother John’s control of the family finances, preyed on John’s weak heart, causing him to collapse with a heart-attack. However, Francis was then driven crazy by John’s ghost.

House of Darkness is one of the drawing room ghost stories that the British horror film industry consisted of prior to the success of Hammer films a decade later. John Gilling, later one of the more underrated of the Anglo-Horror cycle directors with the likes of The Plague of the Zombies (1966) and The Reptile (1966), writes the story.

John Gilling keeps everything carefully ambiguous as to whether the ghosts are real or not. Indeed, House of Darkness could well have been influenced by the psychological horror films of producer Val Lewton – Cat People (1942), I Walked with a Zombie (1943) et al – which left one unsure as to whether the horror element was real or imagined. Maybe the ambiguities don’t turn on such careful hairs-edges as the classic Val Lewton films do but the film remains effective. Director Oswald Mitchell handles the build-up with a cool tension. Only the final meeting of Laurence Harvey and the ghost, shown in silhouette, remains an anti-climactic disappointment.

There are some good characterisations afforded by the cast, of which smoothly supercilious Laurence Harvey rides above it all. John Teed as the nervously dogmatic and wimpish Noel and Grace Arnold as the strict Tessa also give very good performances.

Director Oswald Mitchell made a number of other thrillers, comedies and musicals throughout the 1930s and 40s, including several of the Old Mother Riley series. His only other genre entry was The Greed of William Hart (1948), a version of the historical body snatchers Burke and Hare.