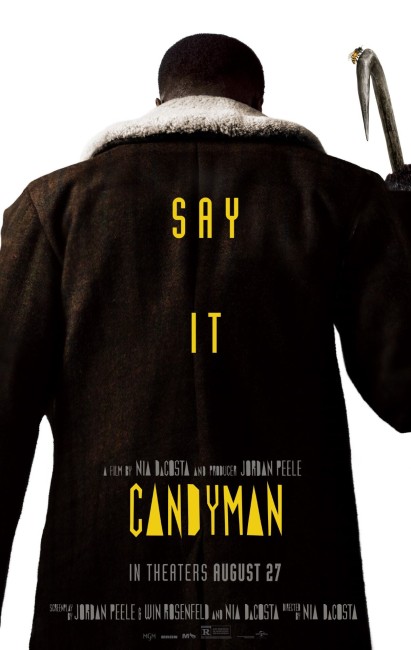 Anthony McCoy is a rising new Chicago artist. After his girlfriend Brianna’s brother Troy tells him the story of Helen Lyle, Anthony decides he wants to make a his new installation about Cabrini Green, a former ghetto area that has now been redeveloped. In delving into Helen’s story, Anthony learns the legend of Candyman, a weird individual who was wrongly thought responsible for placing razor blades im children’s candy and killed by police violence. Anthony takes the challenge and calls the name Candyman five times in a mirror. Immediately after, there are a series of murders of those involved with his art installation.

Candyman (1992) was a classic horror film based on The Forbidden, one of the stories in Clive Barker’s Books of Blood (1984-5). It received much acclaim during its day and turned Tony Todd who played the title role into a horror icon. It was sequelised twice with Candyman: Farewell to the Flesh (1995) and Candyman: Day of the Dead (1999), both featuring Tony Todd reprising the role of former slave Daniel Robitaille.

A fourth Candyman film was debated over the years. This was eventually taken up in 2018 by Jordan Peele director of hits like Get Out (2017) and Us (2019). Peele was originally to direct but stepped back to a writing/producing position and handed the directorial reins to Nia DaCosta who had previously emerged to acclaim with the crime thriller Little Woods (2018).

What is noticeable about Candyman 2021 as opposed to Candyman 1992 and any of the sequels is that it has been claimed as a story by African-American filmmakers. Which makes a lot of sense when you think about it. The story was always one about a wrongly persecuted Black slave emerging through into the present-day. The directors of all the other Candyman films were white – Bernard Rose was British and both sequel directors Bill Condon and Turi Meyer are American, while the original story came from British writer Clive Barker (whose name isn’t mentioned until almost near the end of the end credits). All three films take a largely white perspective and tell the story through the eyes of a white woman who discovers the Candyman story and then becomes targeted by him. By contrast to these, Nia DaCosta is African-American and the film comes with a predominantly African-American cast. The white heroines of all the other films have been replaced by an African-American male protagonist Yahya Abdul-Mateen II.

More importantly, while the other Candyman films sat atop a hotbed of racial issues without majorly delving into any of them – excepting perhaps Farewell to the Flesh – Candyman 2021 takes a full-on dive into Black Lives Matters and the Defund the Police campaigns. This does entail a reasonable change to the mythology of the originals. Here we learn that there is not one Candyman Daniel Robitaille but that Candyman is an urban Boogeymen with shifting faces – the one we have throughout the film is a man with mental health issues who was innocently shot by white cops in a police violence incident. The original Candyman Tony Todd does make an appearance at the end, while we also get a return appearance from Vanessa Williams whose character is tied to the events of the sequel plus Virginia Madsen’s voice on the soundtrack.

The replacing of the white heroines of the original trilogy with Yahya Abdul-Mateen II makes the film into something different. The original films always had the sense of a white woman venturing outside of her safe zone and delving into the repressed – ‘the forbidden’ of Clive Barker’s title – where Candyman would come to romance her at the same time as warping her perception of reality and killing those around her. That sense of forbidden attraction is missing here – at most, we get a series of scenes where Yahya Abdul-Mateen II seems to be transforming into the Candyman, something that is physically forced onto him later in the show. Unlike the originals, the Candyman here lacks personification and is reduced to no more than a figure that hides in the shadows – we never even get to see his face. There is no longer any forbidden attraction, although we certainly get the sense there was in the original of the protagonist having their life turned upside down and blamed for the Candyman’s killing spree.

In a considerable politicising of the original, the issue of police violence features strongly throughout – the mythology becomes majorly stretched out of shape when it comes to the last scene of the film with the cops asking Teyonah Parris to file a false report about what happened only for her to summon Candyman to kill all the officers at the scene. Nia DaCosta and Jordan Peele also place other issues onto the film. The real Cabrini Green (a Chicago housing project) was actually demolished and redeveloped not long after the first film came out. Candyman 2021 incorporates that into its story and the film becomes one about how the Candyman adjusts to the issue of urban gentrification. Now, in a central metaphor that I am afraid I didn’t always follow, the appearances of the Candyman largely targets the white art dealers and critics who the film sees as responsible for the gentrification – something about how the artists are responsible for the renovation of the neighbourhood because they need cheap studio space. (I would have though the logical target in this instance would be landlords/owners and redevelopers).

What boosts the film a good deal is the directorial hand of Nia DaCosta. DaCosta stages each of the murder set-pieces with stylistic effect – the surprise jolt as the Candyman appears behind the Brian King and Miriam Moss in the gallery; another fine scene where a group of schoolgirls all call the Candyman in the school bathroom mirror. DaCosta’s set-pieces are often stylish and come with quiet understated effect. There are also some fine scenes recounting the legend of the Candyman and Helen Lyle’s story using silhouette figures.

I particularly liked the subtlety of the scene where Yahya leaves critic Rebecca Spence’s apartment and the camera pulls back from outside until her apartment is a tiny lit up dot in the wall of the building and we see her exit and something happen – where we are not sure if she did take the challenge in the bathroom or not – but cannot be certain what. The best scene in the film though is the one where Yahya Abdul-Mateen II sees himself in Rebecca Spence’s hallway mirror and the Candyman appears, mimicking all of his movements and in that moment we cannot be sure if he is turning into the Candyman or if the spate of murders have all been in his head.