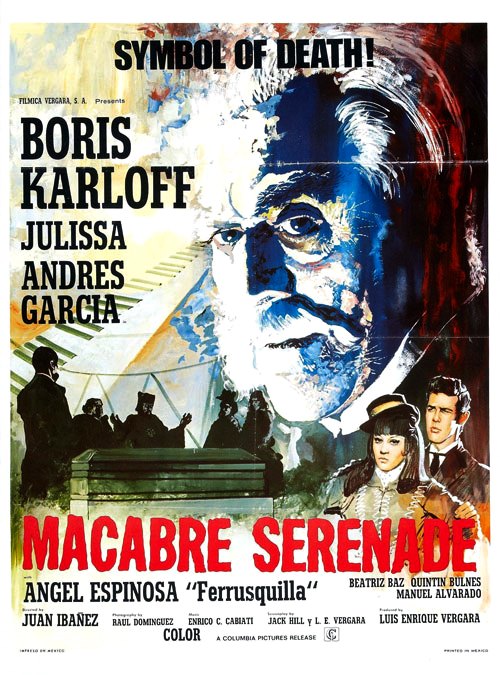 The year 1900. Assorted relatives are asked to travel to Morteval Mansion at the behest of the aging Matthias Morteval. As they gather, Matthias talks of his ancestor Hugo who was driven mad, believing eyes were looking at him all around the house. The Morteval family were known for making automata and toys that were reputed to be able to come to life and kill. That night, Matthias dies. The relatives are asked to stay on for the funeral and reading of the will. However, as they do, the toys come to life and begin killing the gathered relatives.

House of Evil was one of four films shot in Mexico starring Boris Karloff. The others were The Fear Chamber (1971), The Incredible Invasion/The Alien Terror (1971) and Isle of the Snake People (1971). The four films were shot in 1968 as part of a US-Mexican co-production deal. Jack Hill, the director of works like Spider Baby or, the Maddest Story Ever Told (1968), The Big Doll House (1971) and Foxy Brown (1974), directed the scenes with Boris Karloff is Los Angeles. The rest of the film (the bulk of the show) was filmed in Mexico by local director Juan Ibañez. Due to complications, most of the films were not seen until 1971. Karloff died in 1969, making these his last released (although not last shot) works.

All of the Mexican films from Hill and Ibañez were shoddy and inferior. House of Evil is no different. The relatives gathered for the reading of the will is a creaky plot going back to at least The Cat and the Canary (1927). Added to the mix is a bunch of automata and toys that appear able to come to life – here the film seems to be wanting to head in the direction of an evil toys and dolls film that was much more successfully conducted in later works like Dolls (1987) and Puppetmaster (1989). (Although the end revelation of a human agency behind things leaves it unclear if the automata were actually coming to life or this was all being staged as part of an elaborate revenge scheme). Moreover, the film fails to develop or make the malevolent toys and dolls premise seem in any way interesting. Indeed, we only get about three scenes with the dancing automata and toy cannons killing people, after which they toys are forgotten about.

Juan Ibañez is the only credited director on the version of the film I saw but Hill is credited elsewhere and on the other Mexican Karloff films. Whoever is responsible didn’t do a particularly good job. The film is dull and dreary. Little atmosphere or suspense is generated. Camera set-ups seem to have been hurriedly staged and nobody bothered with multiple takes. A scene where Beatriz Bas is grasped by a lifesize dancing automata that keeps moving faster and faster and won’t let her go fails entirely due to the inability of the director to make the scene seem in any way convincing.

The film’s one bright spot is Boris Karloff who is on fine form and lights up the scenes in which he appears. Karloff was 81 years old at the time and in ill health – he is notedly seen moving about using a walking stick. Karloff’s presence is kept brief – either due to age or the production only being able to afford to hire him for a few days – and thus he is kept off screen for much of the film, first said to be resting and it then being announced that he has died, before making an appearance again at the end.