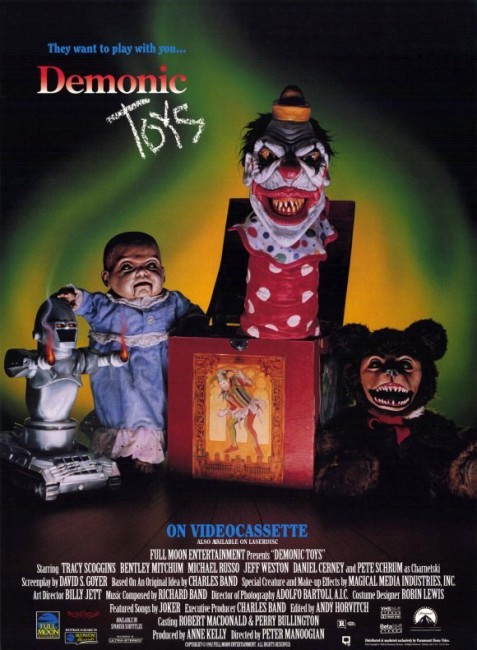 Police detective Judith Gray breaks the news to her partner and real-life lover Matt Cable that she is pregnant. They then go to an undercover meet to bust two arms dealers but Matt is shot and killed. Judith pursues the two men as they flee into a toy warehouse. She apprehends the surviving dealer only to find she has accidentally locked the both of them inside a storage room. She is able to attract the attention of the security guard Charnetski and visiting pizza delivery boy Mark Wayne to release them. However, the toys come to life and start attacking people. As they are hunted through the building by the toys that become stronger with each person they kill, Judith is contacted by the demon that lies buried beneath the building and controls the toys. It now announces that intends to rebirth itself in her unborn child.

Demonic Toys was one of the films from Full Moon Entertainment, the company headed by father and son Albert and Charles Band that produced a good deal of low-budget genre material for the video market during the 1990s. At Full Moon and their earlier Empire studio, the Bands had made a number of films centred around malevolent dolls beginning with Dolls (1987). Following the success of the mainstream-released Child’s Play (1988), the Bands made Puppetmaster (1989), which has spawned an incredible nine sequels to date. The Bands have made a number of other doll-themed films with the likes of Dollman (1990), The Creeps/Deformed Monsters (1997), Blood Dolls (1999), Doll Graveyard (2005), Dangerous Worry Dolls (2008) and Devildolls (2012).

Demonic Toys is entertaining B-budget fun – although not quite as much fun as either Puppetmaster or Blood Dolls were. The Demonic Toys are wonderfully malicious looking creations. These include the likes of a jack-in-the-box that bites a victim’s face off; a nasty teddy bear; a toy robot that shoots laser beams from its guns. The ringleader of the group is a standard baby face doll that wanders about calling people “fat fucks” or talking about how it “shit in its pants,” while picking up handguns.

The effects work from Magical Media Industries, who serviced most of the Band films of this period, are typically cheap but perfectly acceptable for what is required of them in the film. The location has been economically contained to within a single warehouse for almost the entire running time. On the minus side, there is never much more to the film beyond the provision of these cheap doll effects at regular intervals.

Peter Manoogian directed several other Band films, including one of the episodes of The Dungeonmaster (1984) and the full-length likes of Eliminators (1986), Enemy Territory (1987), Arena (1989) and Seedpeople (1992).