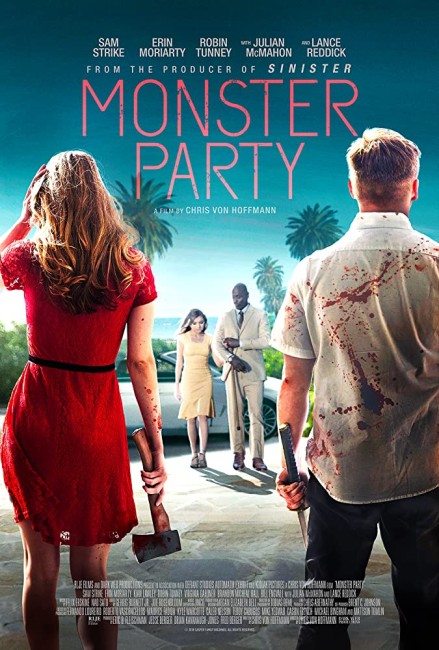 Casper, Iris and Dodge work as a team conducting house burglaries. Casper then finds his father being beaten up by the club owner Emory over unpaid debts and agrees to come up with the money owed within 24 hours. The only option is for he, Iris and Dodge to pose as waiters at an exclusive party held at the Malibu mansion of Patrick Dawson. As the party gets underway, it appears to be some kind of support group, led by Milo. The three of them make plans to break into the safe while the party is going on downstairs. However, Dodge is found by the son Elliot and killed. As everybody reacts in shock, it becomes apparent that the gathering is a support group to help those present restrain their murderous tendencies. Now the group decide that Casper and Iris must be killed too.

Monster Party was the second film for Chris Von Hoffmann who had previously made the horror film Drifter (2016), which had a not dissimilar plot about a couple of innocent criminals straying into the clutches of a murderous family.

The title Monster Party conjures an image of something like the Famous Monsters being invited to a dinner party – maybe one is unconsciously thinking of the delightful Claymation film Mad Monster Party? (1967). Instead what we get is a standard plot about petty criminals venturing into a house and getting caught up in something far worse – think of something like The People Under the Stairs (1991), The Collector (2009), Bad Samaritan (2018) and The Owners (2020) or the more comedic Villains (2019) – where the inhabitants prove to be a family of serial killers and their associates.

Monster Party has surprising similarities to the subsequent more high profile Ready or Not (2019). I had mixed feelings about Ready or Not but it certainly conducted a much more confident version of the story that Monster Party wants to tell – that of a person/group of people being hunted through a mansion by a wealthy family. The problem with Monster Party is that it feels like Chris Von Hoffmann is wanting to make two different films – one about a rehab group for those with psychopathic impulses; the other a film about rich people hunting a group of innocents strayed into their home.

I like the idea of a rehab for serial killers – it is something that if explored more plausibly could make an interesting and original film. On the other hand, Chris von Hoffmann seems more interested in making a film about rich people hunting the poor. And the two don’t quite gel – why is this serial killer therapy group held as a swanky upper-class dinner party? Most real-life serial killers come from average middle and working class families (with the occasional exception of people like Gilles de Rais and Elizabeth Bathory) so you would expect most of the killers to be from this background. Why are most of the attendees from the same family – von Hoffmann seems completely oblivious to the fact that serial killers are formed out of disturbed and abusive pasts, it’s not an aesthetic pursuit the idle rich can just take up like fox hunting or playing polo. Equally the film avoids any mention of how it is the therapy process actually dissuades people from killing, which was the aspect of the premise that most intrigued me.

The other issue is that Chris von Hoffmann meanders and takes a long time to get to the point. The dinner party is teased out for a lengthy period of time, cutting away whenever someone is actually about to say something or to shots of Julian McMahon musing. Von Hoffman’s deliberate vagueness and avoidance of what is actually going on becomes annoying. Nevertheless, von Hoffmann does actually get it together for a blood-drenched climax. There is the undeniably appealing moment of black humour where counsellor Lance Reddick beats one of the guests to death with a poker to stop his rampage and then turns covered in blood to yell “No more killing.”