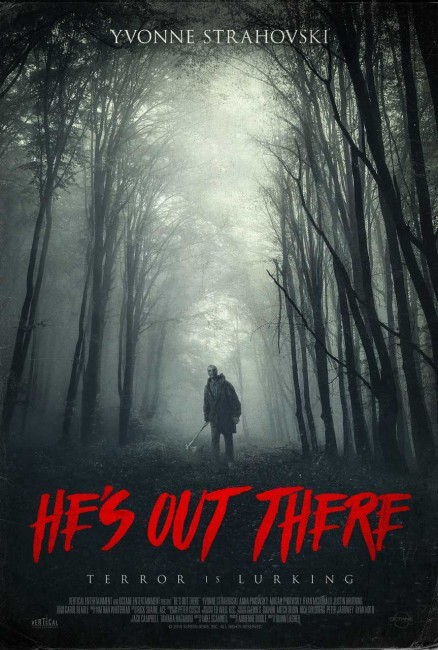 Laura and her two daughters Kayla and Maddie depart for their lakeside cabin with her husband Shawn due to join them shortly. Once there however, they are subject to a terrifying assault and series of psychological games by a hulking masked figure.

He’s Out There seemed like a film that should have been promising. It was initially announced for theatrical release by Screen Gems – only the wheels started to come off before release. Screen Gems abruptly sold interest to another distributor who dumped the film to a digital release. The film was initially announced under Dennis Iliadis, best known for the remake of The Last House on the Left (2009) and a couple of other genre entries +1 (2013) and Delirium (2018). However, the eventual release is credited to Quinn Lasher. Given that the improbably named Quinn Lasher has no other film credits, one makes a confident guess that this is a Director’s Guild pseudonym substituted by Iliadis.

He’s Out There emerges as a fairly standard Cabin in the Woods drama in which family members are terrorised by a hulking masked psychopath. Once the group arrive at the cabin, there is little more to the film than a long parade of brutalities and assaults alternated with gaslight scenes and the killer popping up in the most unexpected places.

All of this quickly runs to much of a muchness. I felt less any kind of tension and suspense than that I was on a slickly edited conveyor belt. The sole part of the film that works well is one scene where the children are huddled under the bed and the killer lifts the bed right up and then comes, sits down and explains himself to them, an unusual insight into such a kind of character that we never see in films like this.

It may say something about how much the film fails to engage you that I spent more time pondering the improbability of the set-ups the killer conducts. These require:- baking a set of poisoned cupcakes and setting up a picnic for the girls to find; stringing trails of red cord through the woods all on the foreknowledge that people are going to approach from certain directions; setting up dummies outside the house; and sneaking in an altering the illustrations in children’s books.

One positive aspect of the film is Yvonne Strahovski, an actress I noticed since she appeared in tv’s Dexter (2006-13) and has been doing some quietly solid and impressive work since then, most notedly as Serena Joy in tv’s The Handmaid’s Tale (2017- ). She has a nothing role here in the sense that the script has expended a minimum of effort on giving the character of the mother anything approaching roundedness. That said, Strahovski gives the part everything and both her fearfulness and assured charge of the children comes with a complete conviction.