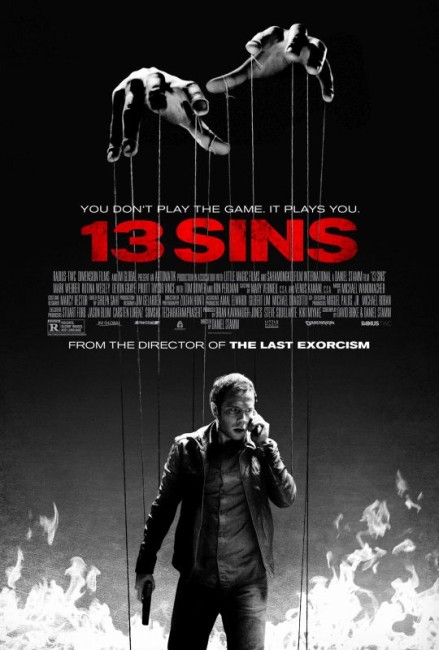 Elliot Brindle receives bad news all at once – he is fired from his job just as his he and fiancee Shelby are planning their wedding. This means that he can no longer afford to support his handicapped brother Michael who will have to be institutionalised again. At the same time, his bitter and racist father informs him that he is being evicted from his retirement home and will have to move back in with them, something the African-American Shelby is not too enthused about. Elliot then abruptly receives a mysterious cellphone call from someone that seems to know all about him. The caller asks him to swat a fly and then eat it to instantly win four thousand dollars. After Elliot does so, the caller then asks him to take thirteen challenges where he will earn several million dollars if he completes all of them. Elliot agrees and the game begins, which starts out with mildly malicious pranks – from making a young girl cry and setting a fire at a church – to ones of increasing extremes – taking a corpse to a diner for a cup of coffee to trashing his own wedding rehearsal. As the acts increase from the bodily mutilation of others to murder, this has Elliot hunted by police as he struggles to complete the challenges.

I was impressed with Daniel Stamm after seeing his second film The Last Exorcism (2010), which did extremely clever things with both the Found Footage genre and the possession and exorcism film. It showed Stamm as a promising name with a great deal of talent. 13 Sins was the film he chose to make as follow-up. With the backing of the near-ubiquitous production company of Jason Blum, Stamm turns to a conduct an English-language remake of the Thai film 13: Game of Death (2006).

13 Sins starts well with an attention-grabbing opening where a respected elderly lecturer (Tom S. Lawson Jr.) stands up to deliver an honorary speech but instead tells two increasingly filthy limericks, which cause the crowd to do a double-take, before he cuts his finger off with a knife and is then shot dead by a security guard while reaching into his pocket for his cellphone.

The film continues to hold attention as the put-upon Mark Webber receives a mysteriously call from an unknown person who can tell him everything about himself and what he is doing right that second despite the fact that he is parked on an empty lot in the middle of nowhere. (This is a film that, though it contains no supernatural elements, leads you to believe there must be something super-normal about the means whereby the mystery group organises things and obtains the ability to guess outcomes of events).

From there, we are spun through an increasingly outrageous series of scenes where Mark Webber must cause a little girl to cry (by telling her her parents don’t love her and that they are planning to get rid of her), setting fire to a nativity diorama and causing the whole church to go up to dragging a corpse to a diner for a cup of coffee (which is compounded when a group of cops come in and sit and the next table).

The pleasure of the film is in seeing how malicious the game gets, culminating in scenes of murder and the mass beheading of a group of people on motorcycles. The script does require some improbable escapes from a police station or for mousy Mark Webber to suddenly make a ballsy out-of-character challenge to a cop who wants to question him.

I had fun watching the nastiness of the game and yet for all that, I did not feel that 13 Sins was a film that ever grabbed me in any particular way. It turns as a modestly well-made film that can be easily forgotten when it is over, whereas you felt it should have gripped you and gotten in alongside the sweaty tension and moral compromise of its central character.