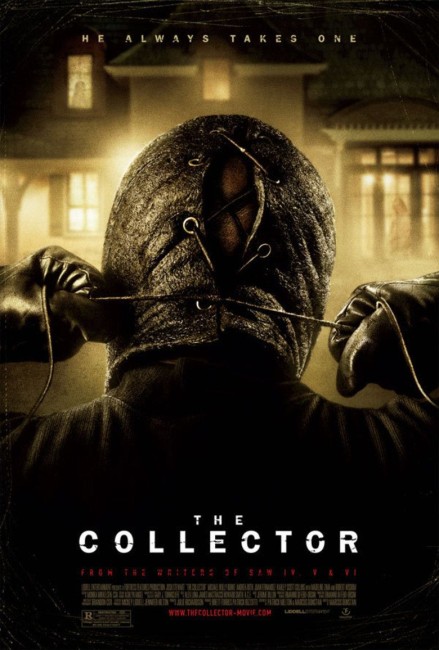 The handyman Arkin finishes a job at the Chase home. In actuality, he has been scouting the property in order to burgle it. When Arkin learns that a loan shark is pressuring his ex-wife, he pushes the crime kingpin Ray to do the job on the Chase home that night. Arkin breaks in, only to discover that the entire house has been converted into a series of deadly traps using knives, fishhooks, acid and blades. In the midst of this, the Chase family are imprisoned and being tortured by a masked killer. Arkin finds a man locked in a box who tells him that the killer likes to collect the people who survive his traps and eliminates the others. Arkin determines to rescue the family from the house, but has to navigate his way out though the exits that The Collector has turned into death traps, while avoiding discovery.

The Collector – which should not be confused with or is related to The Collector (1965), the abduction comedy/psycho-thriller starring Terence Stamp – is the directorial debut of Marcus Dunstan. Dunstan and his co-writer Patrick Melton first came to attention with the script for the Project Greenlight hit Feast (2006). Along with writing that film’s two sequels Feast II: Sloppy Seconds (2008) and Feast III: The Happy Finish (2009), they were snapped up by the Saw franchise and wrote Saw IV (2007), Saw V (2008), Saw VI (2009) and Saw 3D (2010), as well as Piranha 3DD (2012) and Scary Stories to Tell in the Dark (2019).

The Collector is an exceedingly strange film. Before watching a film, I usually give its press notes only the briefest glance – enough to know if what I am watching is something I want to write up. (I like to know as little about a film as possible, except for watching its trailer – in other words going into view it the same way that most people in the audience do). The press notes spoke about a serial killer who collects people.

However, sitting down to watch the film, it seemed something completely different to what these notes suggested. The first 20 or so minutes involve us in the activities of a handyman (Josh Stewart) who makes plans to burgle the home where he has just been working for the sake of his ex-wife and daughter, only to get there and find he has stumbled into a house that has been turned into a series of death-traps. Even then it takes some time to work out what has happened here – and longer to work out that this is said Collector’s preferred modus operandi.

The greater part of the film consists of Josh Stewart (who could easily pass for a younger brother of Sean Penn) trying to make his way through the traps in the dark and rescue the family before they become The Collector’s victims. The basic premise gives the film an appealingly out-there surrealism – of watching a normal house turned into an alien terrain where the living room is strung up with tripwires, the floor of a child’s bedroom is covered with acid that starts melting Josh Stewart’s sneakers as he walks across, where another bedroom is hung with fishhooks at eye level, and so on. The result reminds of something like the rubber reality house that we had in Wes Craven’s The People Under the Stairs (1991) crossbred with the psychological games and extreme tortures of the Saw films or Hostel (2005).

The surreal novelty of the set-up and the sheer desire to know what is going on keeps one’s interest for a good way into the film, but it soon becomes apparent that Marcus Dunstan’s conception of the film is exactly the same as it is with his and Patrick Melton’s Saw sequels – as not much more than a vehicle for a progressive series of scenes of extreme mutilation. Dunstan duly serves these up, while taking the opportunity to push the envelope of torturous permissibility as far as he possibly can.

We see The Collector with Andrea Roth’s tongue gripped in a pair of pliers threatening to tear it out if she doesn’t shut up and then later sewing her lips together; a cat trapped with its paws half melted on the floor of acid, which is then gruesomely splattered in a trap after John Stewart rescues it and lets it out the window; Alex Feldman falling over on one of the tripwires and being torn to bits as he lands on a living room floor covered with bear traps; Josh Stewart imprisoned in the cellar and impaled with a series of hooks through his back and hands while The Collector engages in some impromptu unanaesthetised dentistry using a chisel.

I sat just between liking The Collector for the unusualness of its set-up and switching off at the catalogue of extreme sadism paraded before us. Ultimately, the film falls down on the side of the latter. There are not many times that Marcus Dunstan does not cut a beeline for the nasty and sadistic punchline. There is a reasonable scene where Madeline Zima and boyfriend Alex Feldman come into the house and start making out on the kitchen table, managing to avoid the traps all around them, brushing against the tripwires without activating them, before we get to the scene of her bent half-naked off the edge of the table as he teases her and then she suddenly sees the Collector lurking in the dark. This is the only time that Marcus Dunstan evokes suspense rather than gore.

The other complaint might be that the film is extremely vague about who The Collector is, why he keeps people in boxes or seems to expend great effort turning houses into death traps – at most we get the one-sentence description of how he likes to collect the people that survive his traps. The ending of the film has a downbeat sting, which Dunstan and Melton have clearly set up for a potential sequel (or yet another franchise). This came about with the disappointing The Collection (2012), also featuring a return performance from Josh Stewart.

Marcus Dunstan subsequently went on to direct The Neighbor (2016).