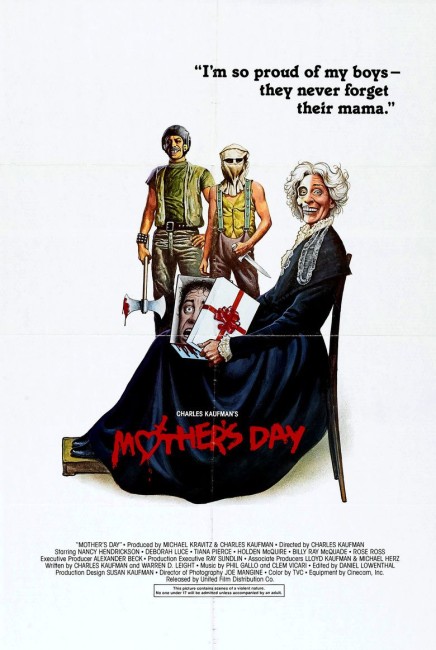 Three college girl friends meet up for their annual get-together. Each year one of them chooses a secret location and this year they go camping in the woods. However, once there they are captured by two psychotic hicks, Ike and Addley. Urged on by their mother to become better killers, the two boys tie the girls up and torture them. However, the girls make an escape and start fighting back.

When Mother’s Day came out, it seemed like it was another of the numerous holiday titled horror films that were attempting to exploit the slasher trend begun with Halloween (1978) and Friday the 13th (1980). In actuality, more than any slasher film, Mother’s Day belongs to a trend begun a few years earlier with the likes of Deliverance (1972), The Last House on the Left (1972) and The Texas Chainsaw Massacre (1974) – what I have termed the Backwoods Brutality Cycle – wherein city slickers were imprisoned and tortured by backwoods hicks. Mother’s Day is almost a parody of the Backwoods Brutality Cycle – it certainly has been intended as such in the opening moments.

When it came out, Mother’s Day was slammed for its bad taste. In truth, if Mother’s Day had been made a decade later this would have just been seen as business as usual for the filmmakers involved – in this case associate producers Lloyd Kaufman and Michael Herz who founded Troma Films. Troma had been founded in 1974 but did not gain its distinctive name until the mid 1980s Kaufan and Herz started to make the likes of The Toxic Avenger (1984), Class of Nuke ‘Em High (1986) and many other such films, all founded on outrageously bad taste splatter.

Certainly, Mother’s Day is relatively tame as Troma Films’ typical fare goes – merely rape, torture and abduction played as a joke. Many of Troma’s later films go way beyond anything here and achieve an offensive button-pushing bad taste for its own sake. Mother’s Day certainly has qualities that many Troma films do not – it is made with a competence and even conducts itself with a modicum of suspense in places instead of Troma’s usual cheapness. Nor is there the gratuitous T&A found in later Troma films.

As was to become the case with subsequent Troma films, everything is played at a cartoonishly silly level – every character is stupid and played with a maximum amount of eye-rolling. When it comes to the slasher movie-type dispatches, these are all conducted tongue-in-cheek – axes in the crotch, dispatches via cans of Drano and a tv impaled on the head.

A very loose remake was conducted by Darren Lynn Bousman as Mother’s Day (2010).