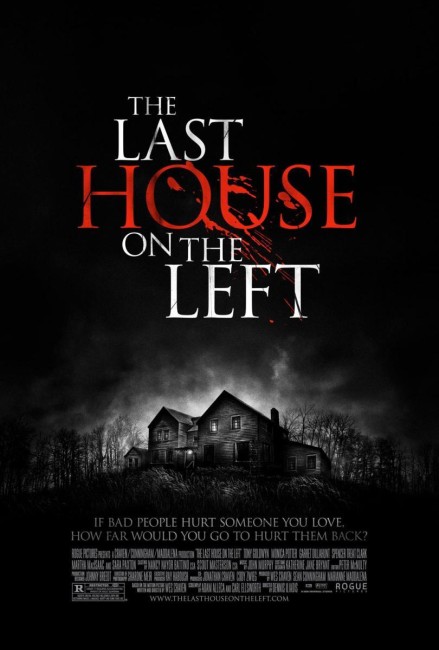 The psychopathic criminal Krug is being transported by marshals for sentencing when a car driven by Krug’s brother Francis, along with his girlfriend Sadie and son Justin, impacts into the prison vehicle and they are able to free him. Husband and wife John and Emma Collingwood travel up to their house by the lake, along with the teenage daughter Mari. Mari takes the SUV into town to meet up with her friend Paige. In the store, they meet Justin who convinces them to come back to the motel room to smoke some dope. Krug and the others then burst in and take the girls prisoner. They drive off in the SUV with the girls but Mari’s attempts to get free cause them to crash. In the woods, Krug and the others stab Paige and then rape Mari, before shooting her as she tries to swim to freedom across the lake. Krug and the others then seek refuge from the storm at the Collingwood house, claiming that they had an accident, unaware that it is Mari’s parents. John and Emma let them stay the night. However, when the still alive Mari crawls up on the porch, John and Emma realise that they have the perpetrators in the house. Unable to call the police, they conclude that the only option is to brutally defend themselves.

The Last House on the Left (1972) was the first film from Wes Craven. It was one of the essential Backwoods Brutality classics alongside other works of the era such as Straw Dogs (1971), Deliverance (1972) and The Texas Chain Saw Massacre (1974). Wes Craven’s shock imagery drew such a strong reaction that the film was banned in a number of countries.

The remake has made a number of distinct changes to the original. The family are now much more blandly upper middle-class, including the daughter (who was a Flower Child in the original). One thought that this would probably have meant that the scene where they encounter Krug and co after going to score some dope would have fallen by the wayside, nevertheless it remains. The events have also been condensed down into a single day and night, whereas the original took place over two days and nights. Also deleted are the scenes where the police are called to search for the missing girls.

One of the better changes is the amplification of the role of Krug’s son Justin (Spencer Treat Clark) – Junior in the original. This serves to turn the scenes where the girls are lured back to the motel into something about the two of them hanging out with a cute guy they met before the others interrupt. Spencer Treat Clark gives a good performance – a mixture of shy and morally conflicted, yet with dark pools of eyes and a disturbed edge where you don’t know which way he is going to turn throughout the course of the story. The other major change [PLOT SPOILERS] is having Mari survive her attack and return to the house.

The scenes where the parents take revenge on the gang are also much tamer. There is a sole scene that holds some of the brutal kick of the original – one where Monica Potter seems to be seducing Aaron Francis before she shoves his head into a sink of dishwater to drown him, then she and Tony Goldwyn push his arm down to be chewed up in the garbage disposal unit and finish him off with a hammer in the head. There is still nothing as brutal as the blowjob scene or the chipping of the teeth out with a chisel. Even Krug is unceremoniously disposed of with no more than a blow to the head with a fire extinguisher, followed by a silly final scene where Tony Goldwyn explodes his head in a microwave.

The other big disappointment is that The Last House on the Left 2009 is much more morally cleancut than the original. The savagery of the first film was in seeing a bunch of sadistic cruelties visited on the two girls and then the morally disturbing reversal that came when the parents discovered who their guests were and took a brutal revenge on them that was even more extreme than the tortures inflicted on the girls in the first place.

The Last House on the Left 2009 is made well after the vigilante revenge film that was sparked off by Death Wish (1974) and its ilk. Now there is no savage irony to seeing the parents become even more extreme than the perpetrators; what we have is merely the parents being reduced to taking up arms to defend their household, which is fairly much stock and parcel of every revenge film. There is no irony to the act, simply a sense of standard righteous movie vigilante justice being enacted. And that considerably disappoints on the disturbing kick that the original The Last House on the Left held.

In the central role of Krug, Garrett Hedlund gives a much more controlled performance than David Hess did in the original. One did not think much of Hedlund as the Terminator in tv’s Terminator: The Sarah Connor Chronicles (2008-9) but Hedlund projects a fine sense of danger and menace here.

Dennis Iliadis next went on to direct the doppelganger film +1 (2013), the haunted house film Delirium (2018) and the Cabin in the Woods horror He’s Out There (2018) under the pseudonym Quinn Lasher.