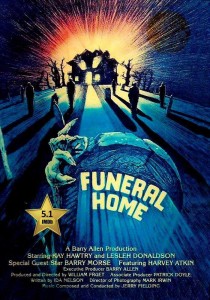 aka Cries in the Night

Heather arrives in the rural town of Northampton to stay with her grandmother Maude Chalmers. Following the mysterious disappearance of her husband James, Maude has turned the former funeral home they used to run into a guesthouse. As Heather settles in and becomes involved with local boy Rick Yates, there are also a number of disappearances of people staying at the funeral home.

William Fruet is a Canadian director who made a modest output of genre films during the great period of Canucksploitation. Fruet first appeared with the fine Backwoods Brutality film Death Weekend/House By the Lake (1976) and went onto the likes of Search and Destroy (1979), Killer Instinct/Baker County, USA (1982), Spasms (1983), Killer Party (1986) and Blue Monkey/Insect (1987).

Funeral Home was originally made under the name Cries in the Night and appears have had a release under that name. However, for US release it was retitled Funeral Home and is known fairly much everywhere under that title. It was released around the heyday of the slasher film but did middling business. The problem is that it is not really a slasher film – a series of killings occur but there are no teens being stalked, no novelty deaths, not even much in the way of suspense and tension built up around each of the deaths. Rather what we have is a film that belongs to the psycho-thriller genre that was popular during the 1960s and into the 70s – more on that in a moment.

The main problem with Funeral Home is that William Fruet has an incredibly laidback pace. So much so that for at least the first hour of the film I wasn’t even sure if what I was watching was a horror film. There are various killings, which mostly consist of cars being shoved into the quarry lake, but Fruet has a very uninvolved way of directing these scenes that almost entirely drains them of any tension. The most evocative scene is a childhood story narrated by Dean Garbett about how he and his brother were caught peeping into the funeral home by Chalmers Sr and thrown into the cellar with the corpses, a scene that does briefly evoke something of a nightmare.

Funeral Home does eventually arrive at being a horror film in its latter third. It is eventually revealed there is a series of killings going on. [PLOT SPOILERS]. In this case the person responsible is exactly who we think it is – matriarch of the funeral home Kay Hawtry. Hawtry plays throughout with a memorable series of fierce disapproving stares and sagely advice. The end where she suddenly erupts into psycho mode works reasonably effectively. Not to mention that this borrows more than a good deal from Psycho (1960) – the dead body in the cellar, the other person having subsumed their personality – even if at the end the assumption that Hawtry has a split personality is now so taken for granted that the script never even feels the need to clearly explain anything about why.