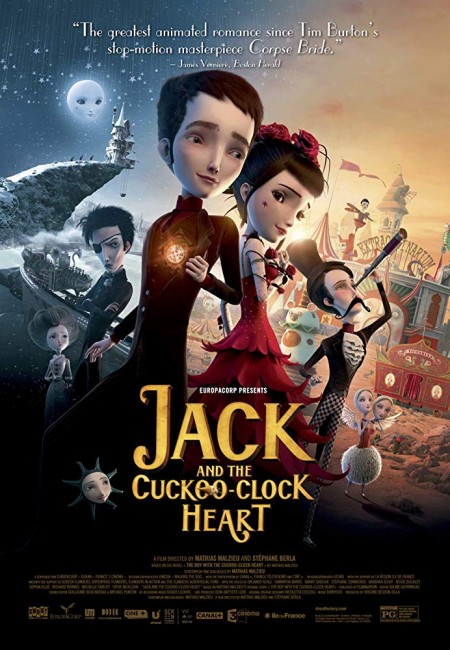 Edinburgh, 1884. On the coldest day of the year, a pregnant mother staggers up the hill to the home of the midwife Madeline to give birth. It is so cold that the young boy is born with his heart a frozen block of ice. Madeline quickly intervenes and creates a replacement heart out of a cuckoo-clock. She gives the boy Jack three rules – he must wind the hands of the clock every day and not ever stop them, he must never get angry otherwise he will overload the heart, and especially must never fall in love. The mother leaves Jack to be raised by Madeline. Ten years later, Jack is yearning to go into the outside world and Madeline finally takes him. In the town square, Jack is entranced by a girl his own age, Miss Acacia, a Flamenco singer/dancer who always operates without her glasses, but Madeline drags him away. Jack insists on being allowed to go to school. There he comes up against the bully Joe who says that he also loves Miss Acacia. After Jack’s cuckoo-clock accidentally blinds Joe during a fight, Madeline places him on a train to flee arrest. There he meets the filmmaker Georges Melies. Melies takes Jack with him to a circus where he gets a job as a scarer in the ghost train ride. Jack also finds that Miss Acacia is a performer at the circus. He befriends her, she unaware that he is the boy from Edinburgh whom she says she loves. Jack tries to persuade Miss Acacia that he is the same boy but this means falling in love. Meanwhile, Joe comes seeking to steal Miss Acacia away from him.

This is a film based on Le Mechanique de Coeur (English title The Boy with the Cuckoo-Clock Heart) (2007), an illustrated children’s book by Mathias Malzieu. Malzieu is the lead singer for the French band Dionysos, which delight in surreal, nonsense lyrics and songs of a fantastical, gothic tone. One month after the release of the book, Dionysos released a concept album Le Mechanique de Coeur (2007) that told the same story as the book, which duly became a hit record. Rights to the book were obtained by the Europacorp production company of Luc Besson (whose wife Virginie is the producer of the film). Mathias Malzieu writes the script and co-directs the film with Stephane Berla, while Dionyos compose the soundtrack and deliver several of their songs.

The story is set in a fantasy version of 19th Century Europe where we get appearances from real-life historic figures, including at one point Jack the Ripper. Pioneering French filmmaker Georges Melies is a major character in the film, even if the Melies we have here is wildly divergent from the real-life character. Melies’ name and reputation has been reclaimed in recent years in particular with the Martin Scorsese film Hugo (2011) and other works like the documentary The Extraordinary Voyage (2011), both released to celebrate his 150th anniversary. Here we see Melies in the midst of directing his version of 20,000 Leagues Under the Sea (1907) and there is mention made of his plans to make his all-time classic A Trip to the Moon (1902). Brigitte Helm, the German actress best known for playing the robot in Metropolis (1927), is also for some reason written in as the autocratic owner of the ghost train.

The main problem with Jack and the Cuckoo-Clock Heart is that the CGI is limited. Part of the reason for this is that one has been ruined by exposure to Pixar, Blue Sky, Illumination and the modern animation studios. When you sit through the density of texture and detail that goes into these films, Jack and the Cuckoo-Clock Heart‘s often corner cutting lesser-budgeted animation becomes frustrating. Nevertheless, the film is designed with an undeniable visual eccentricity that could be called quasi-Steampunk – I liked the image of a steam train that comes with flapping bat wings and big accordion tubes between the carriages. There is an appealingly imaginative (and clearly Melies-inspired) image of the train being lifted up by a giant bird, which drops it on the other side of the track gap and then flies off into the mouth of a living sun. The film picks up when it gets to the circus and the menagerie of strange freaks in the background, including Siamese twins, fairy-like people, people with giant mouse ears, balloon-headed characters and someone with a body shaped like a personified sun caricature.

The other problem I have is the premise. The story seems to operate by entirely arbitrary rules. Okay, so we have to go with the absurd notion of a boy having his heart replaced by a cuckoo clock but there seems no reason at all why the particular rules he is given should be the case. Not touching the hands of the clock makes sense but why avoid anger and love? I can accept that strong emotions may well cause a heart to overload but you would have far more problems physically from say overexertion or over-eating. Similarly, I could not figure out why Jack simply doesn’t tell Miss Acacia who he is from the outset and has to maintain a pretence – although this at least gives momentum to the middle of the story where he has to prove who he is to her. The story also reaches a surprisingly downbeat ending – quite a downer when you consider that it is being sold as a children’s film – which has notedly been changed over the more positive and upbeat one that the book ends on.