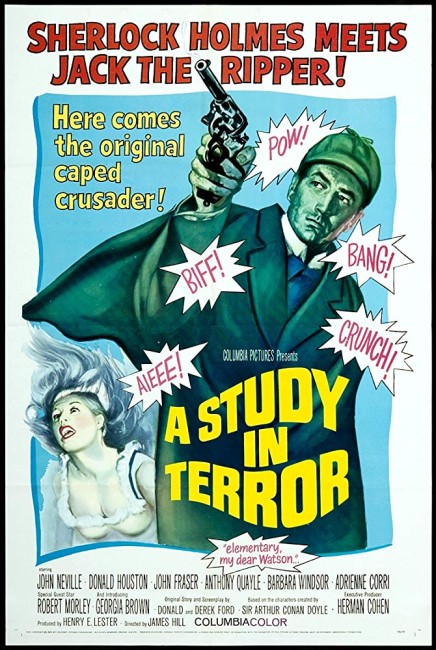 London at the height of the Jack the Ripper murders. Sherlock Holmes’s curiosity is piqued after he is anonymously sent a medical kit with one of the surgical knives missing. The trail leads Holmes to Lord Carfax, whose son Michael, the shame of the family, has been missing for two years. Further investigation takes Holmes to Whitechapel on the trail of the murdered prostitutes where he comes to believe that the missing Michael might be the killer.

Although it is one of the more forgotten Sherlock Holmes screen adaptations, A Study in Terror is increasingly gaining a reputation. Firstly, because it was the first Sherlock Holmes film to have the fictional super-detective Holmes trying to solve the contemporary real world case of the Jack the Ripper murders. This encounter between fiction and real-life has since become commonplace, most notably in the film Murder By Decree (1979), which could almost be a scene-for-scene remake of A Study in Terror, and the later Spanish-made Holmes & Watson: Madrid Days (2012).

The film almost certainly coasts by on the mid-1960s popularity of the Anglo-horror cycle that had been created by Hammer Films. Indeed, A Study in Terror could easily be a companion piece to Hammer’s venture into Sherlock Holmes with The Hound of the Baskervilles (1959). The film is surprisingly faithful to Arthur Conan Doyle with John Neville’s Holmes being a close facsimile to the Holmes on the written page. Holmes’s intuitive leaps are well written, unlike Murder By Decree, which tended to forget about this side of the character. The film is also surprisingly faithful to most of the details of the Jack the Ripper case – even quoting the ‘Dear Boss’ letters at one point.

The direction from James Hill, who later made Captain Nemo and the Underwater City (1969), is not always the most sophisticated – crude cuts between a butcher raising a knife in the air and girls being grabbed by bobbies. However, there is a fine and exciting climax in a burning pub. The production design is lavish and there is a fine score. There are occasional points that fail to hold up – Michael Osbourne’s identity is far too easily tipped off, and there are slight improbabilities in working some of the logic backwards – like how Angela knew that Edward was the Ripper to send the medical kit to lure Holmes onto the trail if she is someone who almost never goes out. John Neville, some years before more well known roles in The Adventures of Baron Munchausen (1989) and tv’s The X Files (1993-2002, 2016-8), brings an autocratic hauteur and authority to Holmes.

The other Jack the Ripper films include:- those that conduct supposedly straight tellings of the details of the case such as Jack the Ripper (1959), the Spanish Jack the Ripper of London (1971) with Paul Naschy, Jess Franco’s Jack the Ripper (1976) with Klaus Kinski, Jack the Ripper (tv mini-series, 1988), The Ripper (1997) and From Hell (2001). There are a number of other works that feature The Ripper as a central character like Alfred Hitchcock’s The Lodger: A Story of the London Fog (1927), and its remakes The Lodger (1932), The Lodger (1944) and Man in the Attic (1953), as well as Room to Let (1950), although most of these vary widely from the known details. More prevalent have been speculative treatments, including the likes of:- the Ripper being an alien spirit that possesses Scotty in Star Trek‘s Wolf in the Fold (1966) and with similar stories occurring in episodes of Kolchak: The Night Stalker (1974-5) and The Outer Limits (1995-2002); the Ripper being Dr Jekyll in both Dr Jekyll and Sister Hyde (1971) and Edge of Sanity (1989); Jack the Ripper’s daughter featuring in Hands of the Ripper (1971); H.G. Wells and the Ripper travelling through time to the present day in Time After Time (1979) and its tv series remake Time After Time (2017), as well as a time-travelling Ripper appearing in episodes of tv series like Fantasy Island (1977-84), Goodnight Sweetheart (1993-9) and Timecop (1997-8); The Ripper having travelled out West in the Knife in the Darkness (1968) episode of the Western tv series Cimarron Strip (1967-8) and the film From Hell to the Wild West (2017);The Ripper being resurrected or copycated in the present day in The Ripper (1985), Bridge Across Time/Terror at London Bridge (1985), Jack’s Back (1988), Ripper: Letter from Hell (2001), Bad Karma (2002), The Legend of Bloody Jack (2007), The Lodger (2009) and Whitechapel (tv mini-series, 2009); a parody segment of Amazon Women on the Moon (1987) that speculates that the Ripper was in fact the Loch Ness Monster; the Babylon 5 episode Comes the Inquisitor (1995) that reveals the Ripper was taken up by aliens and redeemed; transposed to Gotham City in the animated Batman: Gotham By Gaslight (2018); even turning up as a character in the French animated film Jack and the Cuckoo-Clock Heart (2013). Also of interest is the tv series Ripper Street (2012-6), a detective series set in London in the immediate aftermath of the Ripper killings.