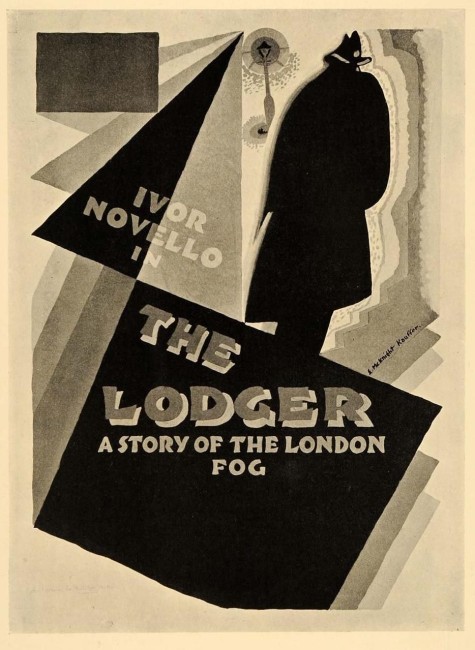 London is plagued by a killer known as The Avenger who attacks blondes and always leaves a calling card at the scene. A mysterious lodger comes to rent an upstairs room from Mr and Mrs Bunting. He proves odd, insisting that the portraits of blonde-haired women in the room be removed, while he makes frequent trips out at night. He becomes friendly with and starts to woo the Bunting’s daughter Daisy, much to the dislike of her boyfriend Joe, a detective who is assigned to The Avenger taskforce. Mrs Bunting becomes suspicious about a number of things and begins to think that the lodger might be The Avenger.

The Lodger: A Story of the London Fog was the third film directed by Alfred Hitchcock. Hitchcock had previously made The Pleasure Garden (1925) and The Mountain Eagle (1926) but he considered The Lodger to be his first real film as it was the first set on which he had creative control. Before this, Hitchcock had worked as an art director, also an editor and screenwriter, at various British studios of the silent era.

The Lodger is based on The Lodger (1914), a novel by Marie Belloc Lowndes. Lowndes based her story on an anecdote she had had heard back during the Jack the Ripper killings of someone who believed that their lodger was the Ripper. She renamed The Ripper as The Avenger. The book has fuelled a number of other subsequent film adaptations – see below. Hitchcock had seen Who Is He? (1916), a stage adaptation of the book by Lowndes, and obtained the film rights.

Visually, The Lodger is stunning. Hitchcock states that his intention was to create a silent film that represented sound visually. To this extent, he pulls off some amazing tricks – we almost hear the screams. After the opening murder, we get a montage of worried faces in irisied closeup to represent fear and gossip spreading and then a series of scenes following a newspaper through the course of production (during which Hitchcock makes the first of his cameo appearances as an editor) to finally arrive at the headline. One of the classic scenes is where Hitchcock represents the lodger’s anxiety and the sound of steps from the upstairs room by momentarily cutting to a shot looking up through a glass floor as a pair of shoes walk back and forth. Hitchcock also uses vibrant intertitles – the neon sign ‘Tonight – Golden Curls’ keeps repeating throughout as a sinister motif.

The entrance of Ivor Novello’s lodger is a fabulous sequence – the door opening on the charming, even foppish and rather fey Novello, full of intense stares and with his face at first wrapped in a scarf just like The Avenger is said to be; his entrance into the empty room, which is momentarily lit by a flash of light from the street; the pan around the portraits of the blonde woman and his evident distaste; the momentary flash of a newsboy down on the street and resulting change of tint colour; Novello staring out, the light framing him in a perfect cross in the centre of his face. It is an entrance that shouts out wrongness and suspicion from every exaggerated effect.

It is also Hitchcock showing an extraordinary grasp of the cinematic form early on and at a time when cinema was still technically primitive. The 2008 dvd restoration does a beautiful job in tinting the footage just the way that Hitchcock intended – a sickly lime yellow-green to represent the fog on the streets, ochre for indoors, blue for the night scenes. The film also rehearses many of the themes that would become regular staples throughout Hitchcock’s subsequent career – the wrong man accused of a crime he did not commit; and the fascination with the murder of beautiful blondes, which reached its apotheosis with Psycho (1960).

The major surprise about the film is that Ivor Novello’s lodger doesn’t end up becoming the killer, unlike all the other versions of the Marie Belloc Lowndes novel. Indeed, Hitchcock seems completely disinterested in revealing who The Avenger is – their capture takes place off-screen and their identity is not mentioned – and by which time Hitchcock has diverted off into telling a Wrong Man on the Run story. Hitchcock explains that this was down to the casting of Ivor Novello. Because Novello was one of the top matinee idols in England at the time, he required that he not be portrayed as a villain and so the ending had to be rewritten where the lodger is redeemed by love, gets the girl and people’s suspicions prove to be wrong. Certainly, we get a fabulous climactic sequence where a mob pursues Novello and seem about to tear him apart as he hangs on a railing caught by his handcuffs as Malcolm Keen tries to batter through the crowd to rescue him.

One of the other surprises is that the film takes place contemporary – amid telephones, telegraph and commercial radio – not in the Victorian London of Jack the Ripper. Of course, Hitchcock is doing what Marie Belloc Lowndes did and referring to The Avenger rather than The Ripper. One also has to shake themselves to remember that for the time period that The Lodger was made, the Jack the Ripper killings were still recent history in the same city that Hitchcock was shooting in – only some forty years old, not something that took place in the distant imagined version of Victorian London we was always associate with the Ripper killings.

Hitchcock relates how he made the film at Gainsborough for Michael Balcon, the man who had given him the opportunity to direct. However, due to studio politics, the film was nearly shut down – high-profile director Graham Cutts blamed Hitchcock’s art direction for the flop of his film White Shadows (1923), while other sources claim that Balcon disliked Hitchcock’s experimental visual style and sexual implications. The decision was made to shelve The Lodger. After some editing, the film was released two months later and unexpectedly proved a huge hit, earning Best British Film Ever Made type comments, and sealing Hitchcock’s career thereafter.

Other versions of The Lodger include The Lodger (1932), a sound version of the film also starring Ivor Novello but not directed by Hitchcock; 20th Century Fox’s The Lodger (1944) starring Laird Cregar; the cheap Man in the Attic (1953) with Jack Palance as the lodger; and the widely variant The Lodger (2009) set in present-day Hollywood where a housewife thinks Simon Baker is a killer mimicking the Jack the Ripper killings.

The other Jack the Ripper films include:- those that conduct supposedly straight tellings of the details of the case such as Jack the Ripper (1959), the Spanish Jack the Ripper of London (1971) with Paul Naschy, Jess Franco’s Jack the Ripper (1976) with Klaus Kinski, Jack the Ripper (tv mini-series, 1988) starring Michael Caine, The Ripper (1997) and the Alan Moore graphic novel adaptation From Hell (2001) with Johnny Depp or that feature The Ripper as a central character like Room to Let (1950), although most of these vary widely from the known details. More prevalent have been speculative treatments, including the likes of:- having the contemporary but fictional figure of Sherlock Holmes solve the mystery in A Study in Terror (1965) and Murder By Decree (1979); the Ripper being an alien spirit that possesses Scotty in Star Trek‘s Wolf in the Fold (1966) and with similar stories occurring in episodes of Kolchak: The Night Stalker (1974-5) and The Outer Limits (1995-2002); the Ripper being Dr Jekyll in both Dr Jekyll and Sister Hyde (1971) and Edge of Sanity (1989); Jack the Ripper’s daughter featuring in Hands of the Ripper (1971); H.G. Wells and the Ripper travelling through time to the present day in Time After Time (1979) and its tv series remake Time After Time (2017), as well as a time-travelling Ripper appearing in episodes of tv series like Fantasy Island (1977-84), Goodnight Sweetheart (1993-9) and Timecop (1997-8); The Ripper having travelled out West in the Knife in the Darkness (1968) episode of the Western tv series Cimarron Strip (1967-8) and the film From Hell to the Wild West (2017);The Ripper being resurrected or copycated in the present day in The Ripper (1985), Bridge Across Time/Terror at London Bridge (1985), Jack’s Back (1988), Ripper: Letter from Hell (2001), Bad Karma (2002), The Legend of Bloody Jack (2007) and Whitechapel (tv mini-series, 2009); a parody segment of Amazon Women on the Moon (1987) that speculates that the Ripper was in fact the Loch Ness Monster; the Babylon 5 episode Comes the Inquisitor (1995) that reveals the Ripper was taken up by aliens and redeemed; transposed to Gotham City in the animated Batman: Gotham By Gaslight (2018); even turning up as a character in the French animated film Jack and the Cuckoo-Clock Heart (2013). Also of interest is the tv series Ripper Street (2012-6), a detective series set in London in the immediate aftermath of the Ripper killings.