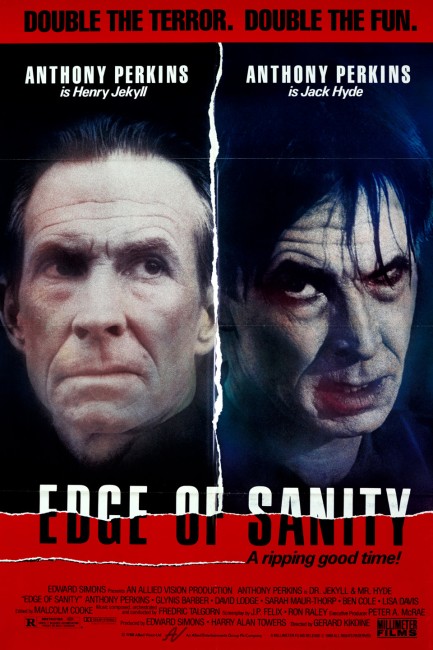 This is probably the worst ever adaptation of Robert Louis Stevenson’s The Strange Case of Dr Jekyll and Mr Hyde (1886). It was once said of producer and sometimes screenwriter Harry Alan Towers (alias Peter Welbeck) that he is someone who prefers to make a dollar dishonestly than ten dollars honestly – he, for instance, defied trade sanctions during the 1980s to shoot in South Africa. Edge of Sanity is Harry Alan Towers’ take on Dr Jekyll and Mr Hyde, done in pretty much the same manner as his collaborations with Jesus Franco or the various adaptations of the Marquis De Sade he produced in the late 60s/early 70s. (Although, the Harry Alan Towers film that Edge of Sanity resembles most is Dorian Grey (1970), which similarly turned a Victorian classic into a dreadful sado-pornographic film).

This version adds absolutely nothing to the Robert Louis Stevenson story – the Mr Hyde as Jack the Ripper angle has been done before and the film does nothing new with it. Although, Edge of Sanity may be the only version wherein Jekyll is not killed and his evil side wins out at the end. The film also adds a pseudo-Freudian origin with Jekyll being whipped as a boy for witnessing a couple having sex, which is supposed to be explain why Jekyll kills women. You realize eventually that this is more a film about a coke-addicted serial killer than anything to do with the duality of good and evil.

Other variations include the would-be sequels Son of Dr Jekyll (1951), Daughter of Dr Jekyll (1957) and Dr Jekyll and the Wolfman (1972); the comedy variations Abbott and Costello Meet Dr Jekyll and Mr Hyde (1953), The Ugly Duckling (1959), the Italian My Friend, Dr Jekyll (1960) and The Nutty Professor (1963) with Jerry Lewis and its remake The Nutty Professor (1996) with Eddie Murphy; versions where Dr Jekyll turns into a woman with Dr Jekyll and Sister Hyde (1971), the Italian comedy Dr Jekyll and the Gentle Lady (1971) and Dr Jekyll and Ms Hyde (1995); the gender-reversed Madame Hyde (2017); a Looney Tunes cartoon Dr Jekyll’s Hide (1954) where Sylvester the Cat transforms into a dog after taking the formula; the erotic/adult versions The Naughty Dr. Jekyll (1973), The Erotic Dr Jekyll (1976), Jekyll and Hyde (2000), Dr. Jekyll & Mistress Hyde (2003) and Jacqueline Hyde (2005); Dr Black and Mr Hyde (1976), a Blaxploitation version where Jekyll is a Black man who turns into a white-skinned monster; the amusing sendup Jekyll and Hyde … Together Again (1982); and a wacky children’s tv series Julia Jekyll and Harriet Hyde (1995); Killer Bash (1996) set in a frat house with an avenging female Jekyll; the excellent deconstruction Mary Reilly (1996), which tells the story from the point-of-view of Jekyll’s maid; while the tv series Jekyll and Hyde (2015) concerns Jekyll’s grandson (Tom Bateman) hunted by various parties during the 1930s. Dr Jekyll appears as a character in The League of Extraordinary Gentlemen (2003) played by Jason Flemyng, in the tv series Penny Dreadful (2014-6) played by Shazad Latif and in The Mummy (2017) played by Russell Crowe, which all feature team-ups between Famous Monsters, while the animated The Pagemaster (1994) features a Dr Jekyll voiced by Leonard Nimoy.