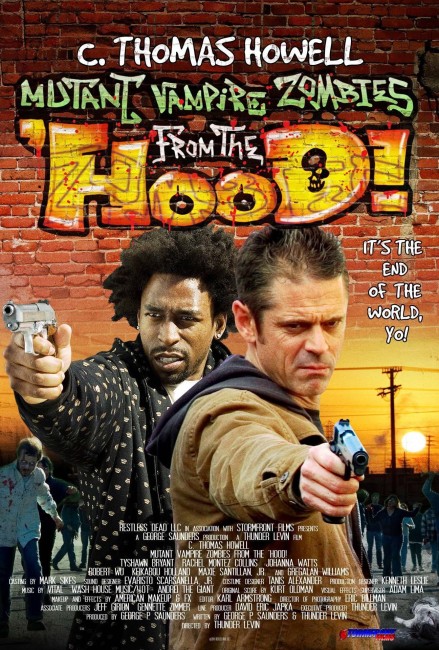 Two police detectives conduct a raid on a warehouse just as Black gang leader G-Dog is conducting an exchange to deliver a briefcase of drugs as ransom to a rival Asian gang who have abducted his girlfriend Latifa. One of the detectives is wounded during the ensuing shootout. In the midst of this, everyone sees strange lights outside. They emerge to discover that a solar flare has turned everybody who was not shielded into zombies. They then pick up a message from astrophysicist Dr Reginald Monte who has accessed the emergency broadcast network and is urging survivors to come together. Agreeing to set aside their conflicts, the group head across L.A. to get to the professor’s home. They are forced to travel on foot after finding the solar flare now prevents fire from igniting meaning that cars will no longer start. Along the way, they are forced to fight off the affected survivors who have mutated into vampires and zombies.

Mutant Vampire Zombies from the ‘Hood was Thunder Levin’s second film and made before he became an Asylum regular. Your natural impression before watching was that it was another of The Asylum’s films that make a virtue of their wackily over-the-top title mash-ups but a closer look at the credits reveals that it is an independent production.

A charitable view of Mutant Vampire Zombies from the ‘Hood might be to call it a version of Night of the Comet (1984) reworked for the era of the gonzo zombie film. (That said, beyond an amusing title, most of the film is played straight). There is the germ of a good idea at the heart of the film. The title sets up the amusing notion of gangbangers vs zombies but this is not quite the case. (Surprisingly, this idea was done before in Hood of the Living Dead (2005), which to all accounts was pitifully cheap). Instead, we get the potentially interesting idea of a group of survivors, including gangbangers, a rival gang and a white cop forced to set aside their mutual rivalries and cooperate for the sake of survival. You suspect that it is an idea that a better-made film – say around the level of something like the not dissimilar but far more professionally made French The Horde (2009) – could have built the tensions out into an effective drama.

Alas, Mutant Vampire Zombies from the ‘Hood is trapped down around the level of a tatty B-budget effort where such ideas quickly get forgotten as the film churns through the usual cliches. The budget is more than evidently low and the film looks cheaply shot and edited. The shootout at the start looks tatty, while the depiction of the social apocalypse is rarely ever depicted beyond a few zombie extras staggering through the streets. Even when it comes to producing staples of the zombie genre like splatter and gore, the film is notedly deficient.

Thunder Levin does write the odd line that approaches the tongue-in-cheek amusement he would find on the Sharknado films – Tyshawn Bryant mimics Samuel L. Jackson in the recent Snakes on a Plane (2006) and comes out with “I had it with these motherfucking zombies in my motherfucking ‘hood.” There is also the obligatory reference to George Romero and an amusing dialogue exchange that gets a few digs in at the Resident Evil series and fast-moving zombies.