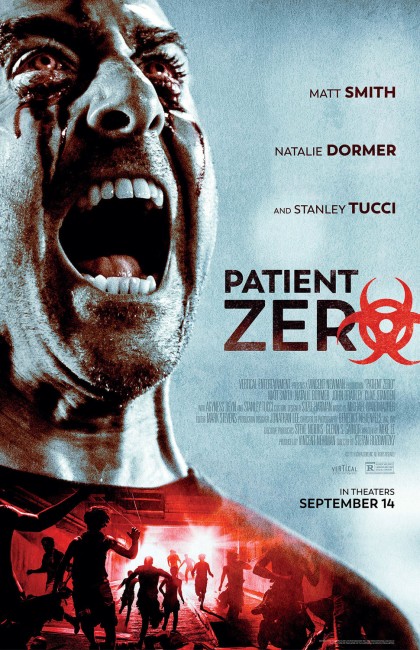 The world has been overrun by a mutant strain of rabies that has turned the infected into crazed zombies. In a bunker, scientist Gina Rose conducts experiments in an effort to find Patient Zero, the original carrier who is believed to have come from Minneapolis just over a year ago. Key to her experiments is Morgan, a former used record store owner who was bitten but has so far not become rabid. As a result, he is able to speak the language of the infected. Morgan interrogates the imprisoned infectees in search of clues to trace Patient Zero. They also have to deal with the hot-headed Colonel Knox who has no patience for Gina’s experiments and wants to eliminate all of the infected.

Austrian-born director Stefan Ruzowitzky gained international attention with his second film, the arthouse-acclaimed The One-Seventh Farmers/The Inheritors (1998). From there he has done on to other internationally applauded works films like the English language Wartime thriller All the Queen’s Men (2001) and the concentration camp drama The Counterfeiters (2007), which won the Academy Award for Best Foreign Language Film. Ruzowitsky had previously entered the horror genre with the grisly and well worthwhile medical horror film Anatomie (2000) and its less effective sequel Anatomie 2 (2003).

The script for Patient Zero was on the Black List for unproduced screenplays in 2013. Produced, all you can say is that what looks good on paper can often be killed in its translation to screen – although I am not entirely sure if the cause is bad direction/bad performances or just an idea that didn’t work well in the first place. Patient Zero is a zombie film in all but name. Rather than the dead, it concerns a mutant strain of rabies that turns the infected into frothing crazed creatures (something that takes it closer to 28 Days Later (2002), the film that kicked off the modern zombie revival) but the difference is negligible.

There is a germ of a good idea at the heart of Patient Zero – Matt Smith has been infected but has not turned and thus has an ability to talk the same language that the infected do. He and the scientists are on a quest to find the titular Patient Zero (although the script never clearly establishes how locating this person is crucial to stopping the rabies outbreak that appears to have overrun the world).

Unfortunately, Stefan Ruzowitsky does nothing to make this premise believable. We get various scenes where Matt Smith goes in to talk to the wildly frothing infected. However, the film entirely avoids explaining exactly what the language of the infected is and how it differs from regular speech. Indeed, there seems no difference between the scenes with Matt Smith conversing with the military and scientists in the lab and him talking to the infected inside the glass cage. When he enters the cage to speak to the infected, we are never privy to how what he is saying sounds to the ears of those outside, which is the thing that intrigued me. In other words, the central premise of the film – the idea of a Zombie Whisperer, if you like – is one that the film does zero to credibly sketch out; in fact, it goes out of its way to avoid ever showing how it might work.

The film is also lumbered with Matt Smith. Now I enjoyed Smith’s eccentric take on the central role in his outing on Doctor Who (2005– ). On the other hand, I am less sure about Smith’s outing in a straight acting role here. Smith seems to have taken the part in an effort to shake typecasting where he has bulked up, is dressed in military fatigues and has rough sex scenes with Natalie Dormer in a bathroom. Alas, Smith with his gawky manner and shoehorn jawline is not Action Hero material and a tough guy part doesn’t suit him at all. He is not helped here by a series of character quirks – drinking glasses of wine and playing records in the cage, nicknaming the infected after classic rock musicians, speeches about architects and so on – that come out as absurdly affected. The scenes with him barking orders and commands at the infected come across as ridiculously over-the-top acting.

Patient Zero also ends up being a film with a potentially interesting premise that goes nowhere. The set-up with the scientists questing to find an antidote while surrounded by a military commander with a hair-trigger fuse has been lifted directly from George Romero’s Day of the Dead (1985). As with Romero, there is nowhere much else for the film to go than have the infected overrun the bunker and kill everybody. The film ends with Matt Smith and Natalie Dormer heading off down a road on a motorcycle but by that point everything has been so played by the book as the zombie film goes it is hard to care.

Patient Zero should not be confused with Patient Zero (2012), a low-budget film about a plague outbreak at a laboratory.