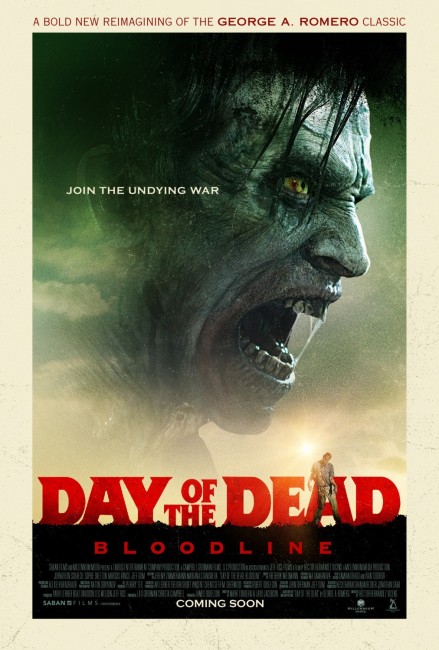 Zoe Parker is a med student at the Whittendale University Hospital. Max, a patient who is sought because of the high number of antibodies in his system, has become obsessed with her, including having his name tattooed on his wrist. He attempts to rape her but she is saved as a corpse in the lab comes to life and bites him. Zoe flees as the entire area comes under attack by the zombie infected. Some months later, she is the medical officer for a group of survivors sheltered at the High Rock Bunker military base. She secretly has a relationship with Baca, the brother of the base’s autocratic commander Miguel Salazar. Zoe believes she can find a cure for the Rotters, as they call the zombies. During an attempt to obtain supplies from Whittendale, the zombified Max sneaks into the base. He is captured but seeing the intelligence he demonstrates, Zoe persuades Salazar not to kill him and that his antibodies offer the possibility of a cure. However, his presence there and the tensions in the bunker threaten all of them.

All of these are leeches on the Romero name. They are films that lack anything original in their own right and whose sole commercial value is in being able to leverage some notional connection to Romero. Both the Day of the Dead remake and Contagium were poor shadows of Romero’s superb original. It should say something about the prospects for Day of the Dead: Bloodline when the creative talents responsible for both of these turn up on the credits of this film – it is produced by Millennium Pictures who made the 2008 remake and own the Day of the Dead copyright, while James Dudelson, co-director of Contagium, is listed as a producer.

To its credit, Day of the Dead: Bloodline bears more in common with Romero’s 1985 original than both the remake and Contagium put together, even though all it has done is randomly cherry-picked plot elements from the original and rearranged them in a different ways. The setting is a bunker; there is a woman protagonist who is at loggerheads with the base’s psychotic military commander; there is a zombie who behaves in a more human-like way than the rest of its kind. Atanis Srebrev also gets torn apart by zombies in a similar way to Joe Pilato’s death in Day of the Dead. The original Day of the Dead was a sequel to Romero’s other zombie films – despite this, all three Day of the Dead spinoffs have to in effect reinvent themselves from scratch meaning that each create their own separate zombie apocalypse origin story.

On the other hand, despite paying more lip service to Day of the Dead, Bloodline is an utterly routine zombie film in all regards. A perfect example of its lameness is that it retells the conflict between Lori Cardille and Joe Pilato – an incendiary aspect in the original – but recasts the two characters in their early twenties. Is making a zombie film that makes a pitch to the teen horror crowd really a way to draw fans of the Romero zombie films?

The character of Howard Sherman’s Bud in the Romero film is now rewritten as Johnathon Schaech’s Max, a stalker who was fixated on Sophie Skelton and tries to rape her in the first few scenes before being bitten. Thereafter Max sort of goes in the general direction of Bud but all that we then get is the lame notion of a zombie stalker who snarls in rage as Sophie Skelton and Marcus Vanco kiss in front of it. (There is no romantic element in Romero’s film).

The film is further killed by a cliche happy-ever-after voiceover from the heroine about finding the beauty in life (despite the fact that almost everyone she knows has been killed) as she settles in with the love interest and the kid that the two have apparently adopted. To the film’s credit, it does have a reasonable level of gore and splatter and some okay zombie effects.