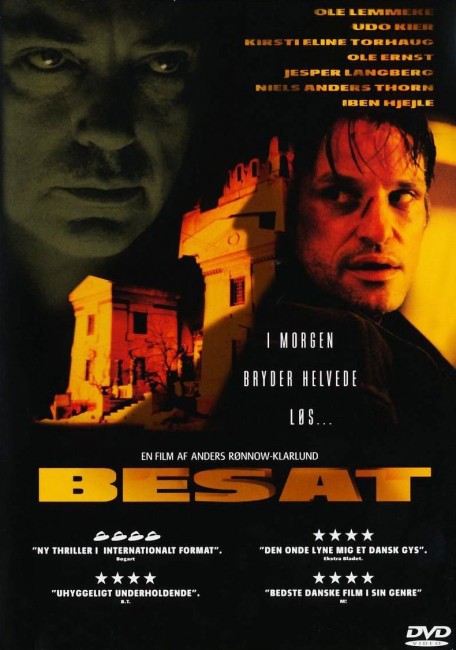 Copenhagen virologist Soren Rastauw is called in when a Rumanian man is found dead. Examining the man, Rastauw believes he has found a new virus that has a pathology similar to Ebola. He tries to track the virus’s path and flies to Rumania to investigate a similar case reported there. Obsessed, he digs up the body of a boy buried in his family’s yard to get samples. At the same time, Copenhagen police are trying to find a priest from an obscure Catholic order who is fire-bombing the dwellings of the affected victims, believing he is following an astrological prediction that is leading him on the trail of Satan as Satan passes from body to body.

Possessed is an interesting Danish genre entry. It was produced by Zentropa Entertainments, the production company of Lars von Trier (who are once again venturing into the realm of creepy hospital drama, following von Trier’s The Kingdom (1994) mini-series). It was the second film from director Anders Rønnow-Klarlund who is subsequently shaping up as a promising international name.

Possessed is a strangely schizoid film. It starts out seeming to be heading along the lines of a plague outbreak drama. The medical thriller scenes comes interspersed with scenes of police tracking down a firebombing priest. Anders Rønnow-Klarlund creates some good, grimly intensive scenes with hero Ole Lemmeke venturing into grave robbing in Rumania, digging up the body of a family’s just buried son from their backyard in the middle of the night, and of the police pursuing arsonist priest Udo Kier. The streets of Copenhagen are shot with a washed-out realism that gives the film a fine hard-edged look. von Trier regular Udo Kier gives an admirable performance during the police interrogation scenes.

So far, so good – one is expecting a plague drama perhaps with a few twists. Bizarrely enough, Possessed then jumps tracks completely and turns into of all things a Biblical End Times film, one where the plague victims are revealed to be possessed by a body-hopping Devil. What is so bizarre about this is the film’s move from convincingly detailed medical drama to outright B horror movie hokum with Anders Rønnow-Klarlund then throwing in all manner of nonsense about astrological conjunctions and tying the film to millennium End Times claptrap a la End of Days (1999).

It is disappointingly hokey, not to mention somewhat banal. The Devil is rendered with a complete eschewal of effects, but this is something that serves to make him powerless as a threat. It turns Possessed into more of a variation on The Hidden (1987) – a science-fiction film featuring people hunting an alien parasite as it passes between host bodies – than anything resembling The Exorcist (1973) or The Omen (1976). The film does at least recognise some of the limitations of its low-key approach. “Why Denmark?” it asks at one point, in regard to why The Devil would want to choose there for his return to Earth. “He’s hiding.”

In his subsequent and third film, directors Anders Rønnow-Klarlund went on to make the remarkable and uniquely original puppet film Strings (2004) and followed this with the satiric dystopian How to Get Rid of Others (2007).