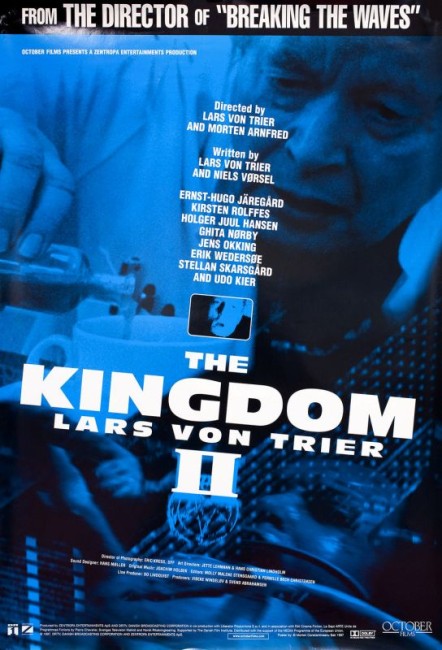 At The Kingdom hospital in Copenhagen, Stig Helmer returns from Haiti with a potion with which he intends to turn his rival Kroshoj into a zombie. However, his plan goes astray and Stig must find and revive Kroshoj’s corpse before he is arrested for murder. Meanwhile, Judith, having been impregnated by the ghost of Dr Aage Krueger, has given birth to a freak baby that has an adult’s head, a giant elongated body and a soul that is half-human, half-Devil. The baby is now wanted by Aage Krueger who is in reality Satan.

The four-part Danish tv mini-series The Kingdom (1994) was given a cinematic release in arthouse theatres in English-speaking countries where it was split into two two and-a-half hour parts. There the name of co-director Lars von Trier, then riding high on the success of Cannes hit Zentropa/Europa (1991), was sufficient to carry it to audiences.

The result was a delightfully eccentric piece of black comedy that suggested a head-on collision between Twin Peaks (1990-1) and ER (1996-2009). The series however was left unfinished, ending on a cliffhanger with the birth of the ghost-impregnated baby and a ‘to be continued’ credit. True to their word, Lars von Trier, co-director Morten Arnfred and the entire cast return here three years later to continue the saga, which once again aired as a four-part mini-series in Denmark and was released elsewhere as a theatrical two-parter.

However, The Kingdom II, although not unenjoyable, is a relative disappointment over its predecessor. There is a certain ricketiness to the story. It comes with the distinct sense that Lars von Trier and Morten Arnfred are not so much continuing a story that is waiting to be completed than they are making the saga up as they go along.

Furthermore, the tone of the second series has changed somewhat – with the sidelining of the ghostly Mary and the sequel’s principal concentration on the more mundane fates of the various lead characters, the sequel loses much of the eerie sense of otherworldliness that hovered over the first series. Although there is some substitute in the bizarre scenes with Udo Kier playing a baby that has an adult head and a twelve-foot tall elongated body, wailing to his mother and the two cooing over the future they might lead together.

The Kingdom II feels at times overly long but it is largely carried by its sense of black comedy. The chief joy here once again is Ernst Hugo Jaregard’s hilarious performance as the conniving, disgruntled Swedish surgeon. There are some highly amusing scenes in his ongoing battles to avoid bailiffs or in his plans to zombify his rival that keep going wrong. Birthe Neumann has an extremely funny part as an overly efficient secretary who, after the decision that costs must be kept down by buying low denomination stamps, pops up to ask whereabouts on a letter entirely covered by stamps she is meant to place the address.

Although the most hysterical sequence in the entire film is the character of a Jamaican faith healer who wanders in to heal a concussed Kirsten Rolffes and removes a large clump of bloody tissue from the back of her head and eats it, noting “It’s the next best substitute since they took the Vitamin C out of Danish beer.”

The biggest downside to The Kingdom II is the end credit ‘to be continued’ and the realisation that one has sat through another five hours with no end in sight and that this means another three years and another five hours to wait for the saga to be wrapped up … if that. However, with the deaths of both Ernst Hugo Järegård and Kirsten Roelffs subsequent to this, the likelihood of any concluding chapter now seems slim. That said, von Trier announced plans in 2021 for a reunion mini-series to air 2022.

The Kingdom was brought up and made into an English language tv series with Kingdom Hospital (2004) with a script from no less than Stephen King. However, this only adapted the first mini-series and pretended that the plot elements added on or explained in The Kingdom II had never occurred.