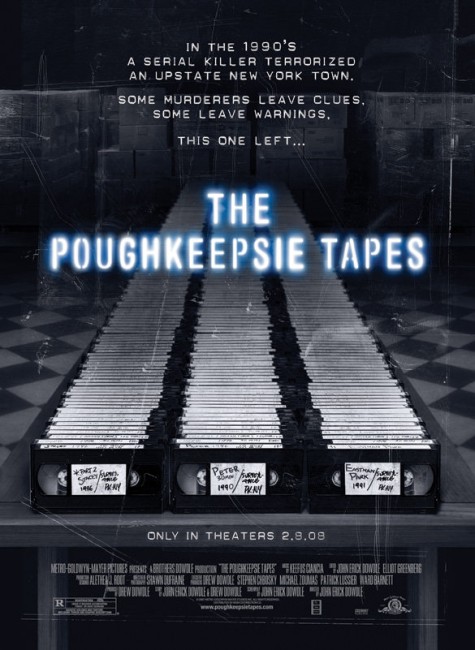 Police have uncovered a series of videotapes left by the so-called Water Street Butcher of Poughkeepsie, New York. A documentary is made about the tapes in which law-enforcement officials and others describe the incredible fiendishness of the killer and the tactics he has used to lure victims, taunt the police and leave false clues. In particular, the documentary tells the story of Cheryl Dempsey who the killer abducted, tortured and humiliated to make into his slave.

The Poughkeepsie Tapes falls into the genre for mockumentary and Found Footage films that have emerged to an astronomical degree in the 00s beginning with The Blair Witch Project (1999) and taking off a few years later with Paranormal Activity (2007) and sequels, which led to an enormous outpouring of usually low-budget Found Footage horror films, which proceeded to revisit fairly much every theme the genre has ever touched.

The Poughkeepsie Tapes was the third film of the Dowdle Brothers, who consist of John Erick Dowdle who performs duties as director and co-writes with his younger brother Drew who acts as the producer. The Dowdle Brothers first made the non-genre Full Moon Rising (2006) and The Dry Spell (2005), which both fall into the genre of indie real-life angst. They then made The Poughkeepsie Tapes, funding it themselves. This gained sufficient word of mouth and festival exposure that they were invited to handle the studio-backed Found Footage film Quarantine (2008), the English-language remake of [Rec] (2007), and subsequently went onto The Night Chronicles 1: Devil (2010), a further Found Footage horror film As Above So Below (2014), the non-genre action film No Escape (2015) and created/produced/directed the tv mini-series Waco (2018).

Some of its weakness aside, there comes the point where The Poughkeepsie Tapes gets its grip on you. The fiendishness of the never-seen killer and the cleverness of the games he plays is admirably portrayed. At one point, he frames a cop as being the Water Street Butcher who is then convicted and goes to the electric chair – only for the killer to then leave another slaughtered body and taunt the police that they had everything wrong.

The film gets particularly raw during the scenes where the killer has Stacy Chbosky (John Erick Dowdle’s wife in real life) a prisoner in his cellar where he terrorises her while wearing a long beaked mask, telling her that she has no name except ‘slave’ or getting her to believe that he killed her entire family. The film also becomes decidedly creepy during the scenes where the killer invites children into his house and tries to inveigle them to his cellar with the intent of killing them, while earlier he is seen abducting and impliedly killing a young girl.

The film’s most chilling scenes come at the very end in the interview with the rescued Cheryl Dempsey where it becomes shocking to see how shattered and frail she is, insisting that her abductor loves her, before the chill moment where she absently reaches up to scratch her head with the stump of an arm that has been cut off at the wrist.