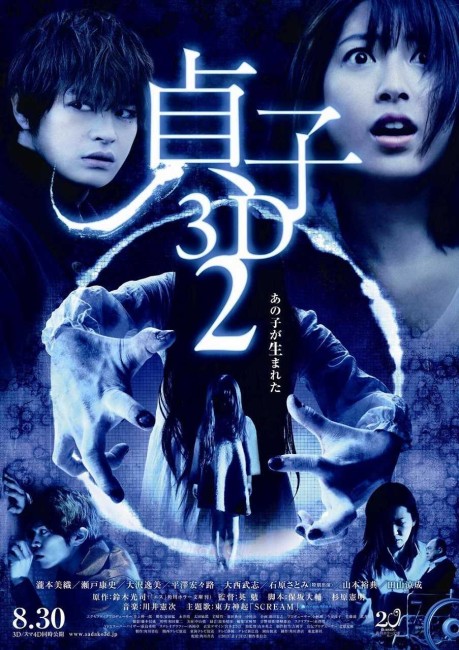 Fuko Ando is raising Nagi, the young child that has been left with her by her brother Takanori. Takanori was the boyfriend of Akane Ayukawa whom Sadako tried to possess. As Fuko now becomes aware, people around Nagi are being killed by a curse that emerges from their computers and mobile devices. In trying to stop this, Fuko realises that Nagi may be Sadako’s daughter.

When it appeared, Ring (1998) changed the Japanese horror film – not just in terms of creating a tide of sequels and imitators but also sparking a wave that would be imitated throughout the Asian region and later by Hollywood. Ring produced several spinoffs – the sequels The Spiral (1998), Ring 2 (1999), the prequel Ring 0: Birthdays (2000), the tv series Ring: The Final Chapter (1999) and the South Korean remake The Ring Virus (1999). There was then the English-language remake The Ring (2002) and its sequels The Ring Two (2005) and Rings (2017). The Japanese series was rebooted with Sadako 3D (2012), based on another novel in the series from the original author Koji Suzuki, which was followed by this and Sadako vs Kayako (2016), a crossover with the Ju-on/The Grudge series, and the subsequent Sadako (2019).

Sadako 3D was the worst of the Japanese films where the eerie atmosphere of the original films was overrun by tedious CGI jumps. The good news about Sadako 3D 2 is that though it has the same director and several of the same cast it is an improvement over Sadako 3D. There is not the endless parade of CGI pop-up scares and the film is much more atmosphere driven overall. It is certainly still reliant on the use of 3D to provide jumpscares, although does deliver some passable ones.

The plot involving a mystery child with abilities going around killing random people is now a long way away from the set-up we had in Ring concerning a cursed tv broadcast. The videotape gets a mention but the series is no longer about cursed tv broadcasts – indeed with its curse manifest via mobile devices what this seems like is more an entry in the rival series One Missed Call (2003) and sequels. There is occasional callbacks to the original, more so to ‘Sadako 3D, but the tone of the film is a long way from the sheer uncanniness that Hideo Nakata conjured in the first two Ring films.

Director Tsutomu Hanabusa provides one or two okay moments. I did like the scene where Mori Takimoto is attacked by doctor Itsumi Asawa only for the doctor’s hair to become caught in the paper shredder and her to then start swinging the shredder around attached to the end of her hair. The best scene in the film is actually the one where Mori Takimoto carries the sleeping Kokoro Hirasawa to the middle of a bridge and anguishes about whether to throw her over only for Kokoro to wake up in the midst of this and tearfully ask “Are you going to kill me?”