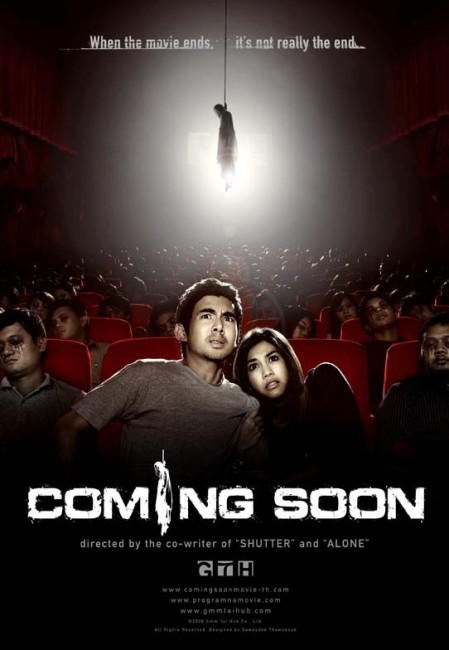 Chen works as a projectionist at the Mega Cineplex theatre. Peoll, the brother of his ex Som, persuades Chen to help making a copy of a film to sell to bootleggers. The film, ‘Evil Spirits’, is based on the true story of a murderous old woman Shombra who abducted and blinded children before she was hung by villagers. Afterwards Chen is unable to find Peoll. When he calls Peoll’s cellphone, he is startled to hear ringing come from the movie screen and sees that Peoll’s body is among the dead inside the movie. He realises that the spirit of Shombra is emerging out of the film to kill all who watch it.

The enormous success of Japanese horror films like Ring (1998) and Ju-on: The Grudge (2003) had a ripple effect throughout Asia. Many of these were multiply sequelised and then later remade in English language versions. Moreover, the J-horror film laid down a distinctive style that was copied by other countries throughout the Asian region – in particular, by South Korea and Thailand.

Coming Soon is one of these Thai horror films. It fairly closely follows the tropes set down by Ring – instead of a haunted videotape that curses people who watch it, it concerns a haunted film that causes people to die after they watch it; there is a very similar theme in both of a girl who was badly treated by people in the past and exudes vengeance from out of the screen in the present. There is also a similar plot structure in both films – several eerie appearances of the menace as it is first understood, while the latter half becomes about a couple setting out on a quest to get to the bottom of the mystery and find the identity of the girl.

Coming Soon is a Ring copy but has its moments. Director Sophon Sakdaphisit creates one fine scene where Chantavit Dhanasevi is searching for his friend, the projectionist (Sarinrat Thomas), finds the camcorder left abandoned in the empty theatre and then calls his cellphone and hears it ringing – only to turn around and find the ringing is coming from the film being projected up on the screen and that his missing friend is among the dead there.

There is another effective scene a few minutes later as Chantavit Dhanasevi comes out of the theatre into the carpark and hears noises behind him, sees nothing, adjusts his backpack and turns to go – only for us to see he now has a creature perched on his back (although disappointingly this is never referred to again and we never get to know what the creature is). There is another worthwhile scene later in the piece where Chantavit Dhanasevi and Vorakan Rojchanawat go in search of the dead girl’s house, he falls through a hole in the floor, she goes for help and then manages to break through a door down on the level below and reaches out to take his hand – only for him to realise that she is still up top and the hand reaching out to him is a ghostly one.

The disappointment about Coming Soon is that it has a great premise – victims becoming trapped inside a movie – but, aside from the sporadic interest provided by the abovementioned scenes, it is routine and there is little to it beyond the cliches set in place by Ring. Still you could easily imagine the set-up being taken by US filmmakers and turned into something else – maybe a demented mix between Ring and something like Demons (1985) or perhaps a horror movie version of The Footstep Man (1992). The film also has an amusing subtext about something vengeful coming out of the movie screen to target those in the Thai movie piracy industry.