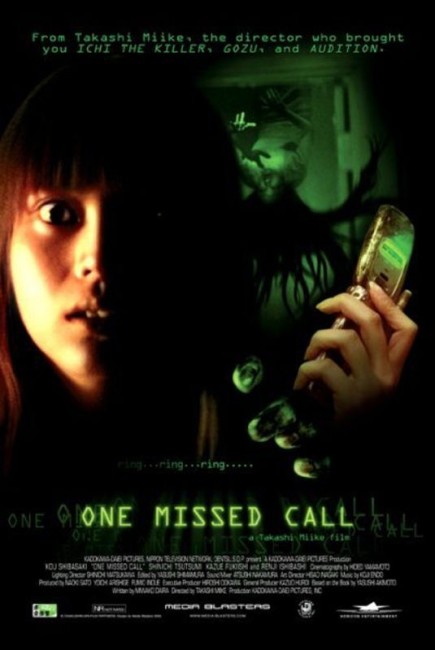 Two of Yumi Nakamura’s friends receive mysterious cellphone calls that appear to be sent by themselves – but 72 hours into the future. As the time that each call was sent arrives, both of them are killed. Next, Yumi’s best friend Natsumi receives a call. The story of the calls spreads so much that Natsumi becomes the focus of a live tv broadcast as her 72 hours expire, whereupon she is killed on air by a supernatural force. Joined by Yamashita, a man whose sister was one of the first victims, Yumi tries to find the source of the killings. The investigation leads them to a young girl that died of an asthma attack and her abusive mother.

Japan’s Takashi Miike has gained a cult reputation in recent years as one of the world’s most out there directors. Miike has delivered extraordinarily violent and perverse works such as Audition (1999), Visitor Q (2001) and Ichi the Killer (2001). Beyond that, Miike is amazingly prolific, having made some 80 films since the early 1990s. (See below for Takashi Miike’s other films of genre interest).

Not all of Takashi Miike’s films are filled with ultra-violent and perverse taboo-defying imagery – in fact, he has a considerable ability to hop between genres. One Missed Call is certainly restrained Takashi Miike. Indeed, it is not much more than a trend-jumper that joins a host of Japanese films that copied the mega-success of Ring (1998). In most respects, One Missed Call is disappointingly derivative of Ring. It substitutes haunted telephone calls for Ring‘s ghostly video broadcast but otherwise the plots are very similar – the recipients are killed within a specified time of getting the call, the heroine is drawn to investigate the agency behind the calls and comes across a young ghostly girl with long bedraggled black hair who is seeking retribution for her murder.

That said, Takashi Miike does a fair effort of making a Ring copy. His one amusing twist is having live tv coverage as one victim reaches their deadline. The film certainly lacks the way-out horror of Miike’s more famous films but on its own terms maintains a reasonable degree of spookiness, especially one scene where a victim is wrapped up in their own arms and during the extended climax at the abandoned hospital where a resurrected corpse pursues Ko Shiasaki through the building.

On the other hand, One Missed Call also shares some of the structural problems of Ring – in both films, the initial premise of people being haunted by ghostly video broadcasts/cellphone calls gradually segues into a more prosaic detective story that drags the middle out before arriving at an eventual revelation that doesn’t have much to do with the phonecalls/video broadcasts. To One Missed Call‘s advantage, it does tie the revelations to the plot more so than Ring did – here the calls come from the numbers in the memory of a cellphone held in the corpse’s hand (although this does seem to be contradicted earlier in the film, where it gives the impression that the calls are viral in nature).

The main problem with the story is the ending. [SPOILER ALERTS]. While this holds a highly effective surprise, it is not one that makes much sense. It is possible that some of this may exist through imprecise subtitling. One found it confusing trying to work out the relationship between the mother, the dead girl and the teenage sister. It is not exactly clear what the mother’s corpse is doing in the abandoned hospital with the cellphone and if it is her or the daughter who is conducting the hauntings. Who is the young girl in the asylum meant to be? Most importantly, how does this relate to the heroine’s past?

[SPOILERS CONTINUE]. The most confusing part is the twist ending. Here the young girl from the asylum appears in the heroine’s apartment, although we are not sure if she is real or a ghost, and next the heroine appears wielding a knife. While this holds a great shock, we are not sure if there is some weird transference gone on between her and the girl or if in fact, as the flashbacks seem to indicate, that she was the abusive teenage sister all along. If the latter is the case, then this a revelation that seems highly contrived, especially in terms of the sympathy that has been previously created for the heroine. Perhaps someone with a better understanding of Japanese than I can explain this to me.

Takashi Miike’s other films are:– Full Metal Yakuza (1997), a yakuza/cyborg film; the teen film Andromedia (1998) about a schoolgirl resurrected as a computer program; The Bird People in China (1998) about the discovery of a lost culture; the torture and sadism film Audition (1999); the Yakuza film Dead or Alive (1999), which comes with a gonzo sf ending; the surreal Dead or Alive 2 – Birds (2000); the six-hour tv mini-series MPD Psycho (2000) about a split-personalitied cop tracking a serial killer; the surreal black comedy The Happiness of the Katakuris (2001); Ichi the Killer (2001), a Yakuza film with some extreme torture scenes; the controversial taboo-defying Visitor Q (2001) about a mysterious visitor; the Cyberpunk future-set Dead or Alive: Final (2002); the surreal Yakuza film Gozu (2003); the ultra-violent Izo (2004) about a cursed, immortal samurai; an episode of the horror anthology Three … Extremes (2004); the superhero film Zebraman (2004); the fairytale Demon Pond (2005); the supernatural fantasy epic The Great Yokai War (2005); Big Bang Love, Juvenile A (2006), a prison murder mystery with SF elements; the SF film God’s Puzzle (2008); YatterMan (2009), a gonzo live-action remake of a superpowered anime tv series; Zebraman 2: Attack on Zebra City (2010); Lesson of the Evil (2012) about a murderous high school teacher; As the Gods Will (2014) with high school students being slaughtered by a doll; Over Your Dead Body (2014) wherein the roles in a ghost story play come to replay themselves in the lives of the actors; the gonzo horror film Yakuza Apocalypse (2015); Terra Formars (2016) about giant mutated cockroaches on Mars; Blade of the Immortal (2017) about an immortal samurai; JoJo’s Bizarre Adventure: Diamond is Unbreakable – Chapter 1 (2017); and Laplace’s Witch (2018); and Laplace’s Witch (2018).