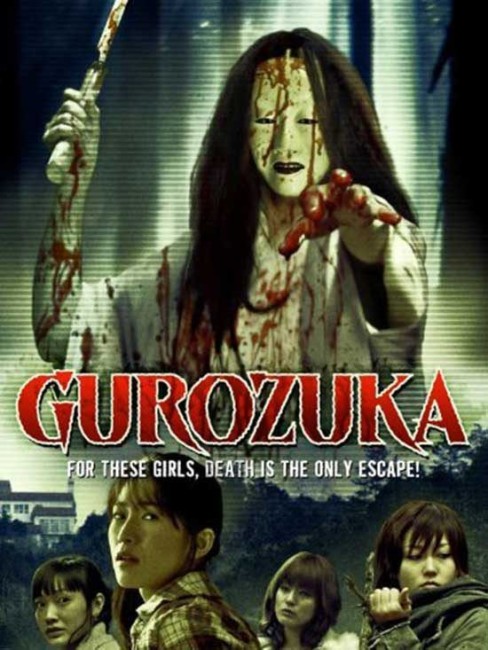 Five girls from the university Movie Club travel up to a lodge in the woods to make a film. Ms Yoko, the teacher who accompanies them, insists on bringing the socially awkward Takako whose presence is disliked by some of the others. The leader of the group Ai shows them an 8mm film she found in the clubroom, which concerns a Gurozuka, a character from a Noh play. In the play, the character is a woman who kills and eats all the travellers that stop at her inn, becoming a demon figure after she puts on a deigan mask. Seven years ago, a group from the Movie Club attempted to make the film about the Gurozuka but this purportedly ended with several dead and one girl placed in an asylum. While they are there, someone starts playing malicious jokes on them – stealing all the food supplies, their phones and wallets, feeding one of the girls poison mushrooms. As dead bodies start to turn up, they realise that the Gurozuka is very much alive and coming to kill them.

Gurozuka is an entry that came out amid the 00s fad for J-horror ghost stories following the success of films like Ring (1998), Ju-on: The Grudge (2003) and their various sequels, imitators and English-language remakes. Gurozuka is a low-budget entry and failed to gain much of a profile even in its own country. The film incorporates many of the familiar plot elements introduced by these films – the vengeful spirit of a woman with long hair hiding her face; the video that affects everybody who sees it with a viral curse.

The style of director Yoichi Nishimiya is plain and ordinary. What is particularly lacking for much of the film is the eerieness that directors like Hideo Nakata and Takashi Shimizu infused the J-horror film with in the abovementioned entries and others. Nishimiya’s camera seems to be merely anonymously observing scenes with no interest in style or mood. In other words, what we have is a J-horror film that has been bled of all atmosphere.

This also makes for a dull film – we end up waiting for over half the running time for something out of the ordinary to happen. Most of the time is taken up by the bitcheries between the six girls and petty debates over who stole the food and wallets. At about the one-hour point, Nishimiya gets one decent jump off while Chisato Morishita is reviewing the tape and abruptly sees the masked Gurozuka figure appear behind the actress.

On the other hand, you might want to compare Gurozuka to the classic kaidan eiga Oni Baba (1964), which similarly featured a demon figure wearing a mask and did not produce anything until right near the end, yet still managed to create something of haunting atmosphere. Gurozuka fails to do much at all.

[PLOT SPOILERS] With the unmasking of the girl behind the deigan mask at the end, the film reveals that it is not a ghost story at all but that the killings are being conducted by a deranged survivor from the previous film shoot seeking revenge. This reveals the film’s attempts to build everything up as a familiar J-horror ghost story to be irritating misdirection. That said, the final coda of the film reveals that there is a supernatural agency at work after all as we see one of the last survivors having watched the cursed videotape now turning and obsessively latching onto the remaining girl.